If nothing limits your layout to a sheet of plywood, a little more space goes a long way 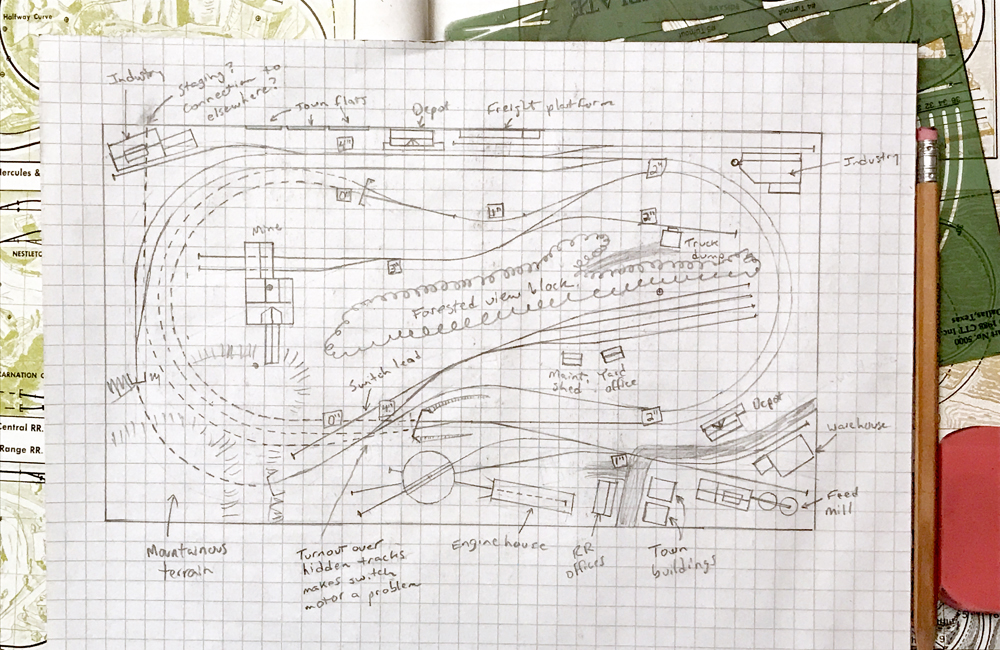 The good old 4 x 8 train table is a tradition – if not a cliché – for a reason: plywood comes in 4 x 8-foot sheets. When our dads or grandpas bought us our first train sets for Christmas, they often nailed that simple oval or figure-8 onto a table made of one sheet of plywood. It’s simple to build and fits your basic HO scale oval with room to spare.

But there’s only so much you can do with a 4 x 8. Take a look at some of the plans Kalmbach compiled in one of its best-selling books, 101 Track Plans for Model Railroaders (which is still available in the Kalmbach Hobby Store, KalmbachHobbyStore.com). Most of the plans maximize the main line with a twice-around approach, sending one loop climbing up and over the other. But even those that use very tight curves (15” radius) have room for only a handful of spur tracks and sidings. Some don’t even have passing tracks.

Here’s a question: If you’re already cutting up the plywood sheet to lift the grade up and over, why are you still limiting yourself to the size that plywood used to be? Let’s see what we can do with a twice-around plan if we add just one foot to dimension of the table, making it a 5 x 9.

I began by plotting out the two nested curves on the right and the grade-separated curves on the left, then connected them with straightaways and 18” radius curve sections. The elevations are based on a rise of 1/2” per foot of track, which is just a hair over a 4 percent grade – a little steep, but doable by a single locomotive pulling a train of length appropriate for this size railroad, four to eight cars.

To maximize realism – something that twice-around plans often lack – I decided to hide one end of both loops in tunnels. The mountainous terrain this would require suggests setting the layout in coal country, so I added a switchback coal branch in the middle of the layout, with a simple truck dump on one end and a sizable mine tipple on the other. On the other side of the main loop I placed a coal-marshaling yard where empties and loads can be exchanged and coal trains assembled. I’ve positioned the turnouts to these two destinations so a train moving clockwise around the loops can switch both as trailing-point turnouts.

Now, where could those coal trains go? I’ve already put a passing track inside the lower-level tunnel; that could be used to stage an empty hopper train and receive a loaded one when the session is through. If we can assume we’ll control turnouts on the layout with remote-control switch motors, we can add another turnout just inside a tunnel portal to add a stub-ended track. This can either be used as a single muzzle-loaded staging track or lead to a separate staging yard attached at top left. Either way, be sure to build your mountain for easy access in case of derailments.

Speaking of switch motors, there’s one place where that will be a problem: the turnout leading to the coal marshaling yard. Falling as it does directly on top of the hidden trackage, it will require either manual control or a switch motor positioned under a structure off to the side of the track.

There’s a nice large area at bottom right that seems perfect for a town scene with a couple industries. By employing a switchback we can also include a small engine servicing area. Since there isn’t space for a coal tower, water tank, or particularly large turntable, we’ll have to set our layout in the early diesel era and work the layout with a Geep or Alco road switcher.

A depot and a couple of industries at the top of the plan, and we have a destination for a local freight or mixed train in addition to the coal traffic. This train should also run clockwise, or else four of its five industrial spurs will be facing-points.

The one thing I’m not happy with about this plan: with a 5-foot wide table, the reach-in distance to the coal marshaling yard is an issue. At 6’-4” tall, I can reach in 2-1/2 feet easily, but not everyone can. The approach to the yard could be curved more to bring it closer to the main line, reducing the reach, but that would also necessitate reducing the length or number of tracks. I could have put the yard where the town is – there’s plenty of width – but the length is again an issue. Or you could eliminate the town and engine servicing area, reducing that end of the layout to 4 feet wide, but that sacrifices a lot of interesting operation. Perhaps another solution will present itself later. After all, this is just a sketch.