At home and with his model railroad club, Gil Bruck is always going 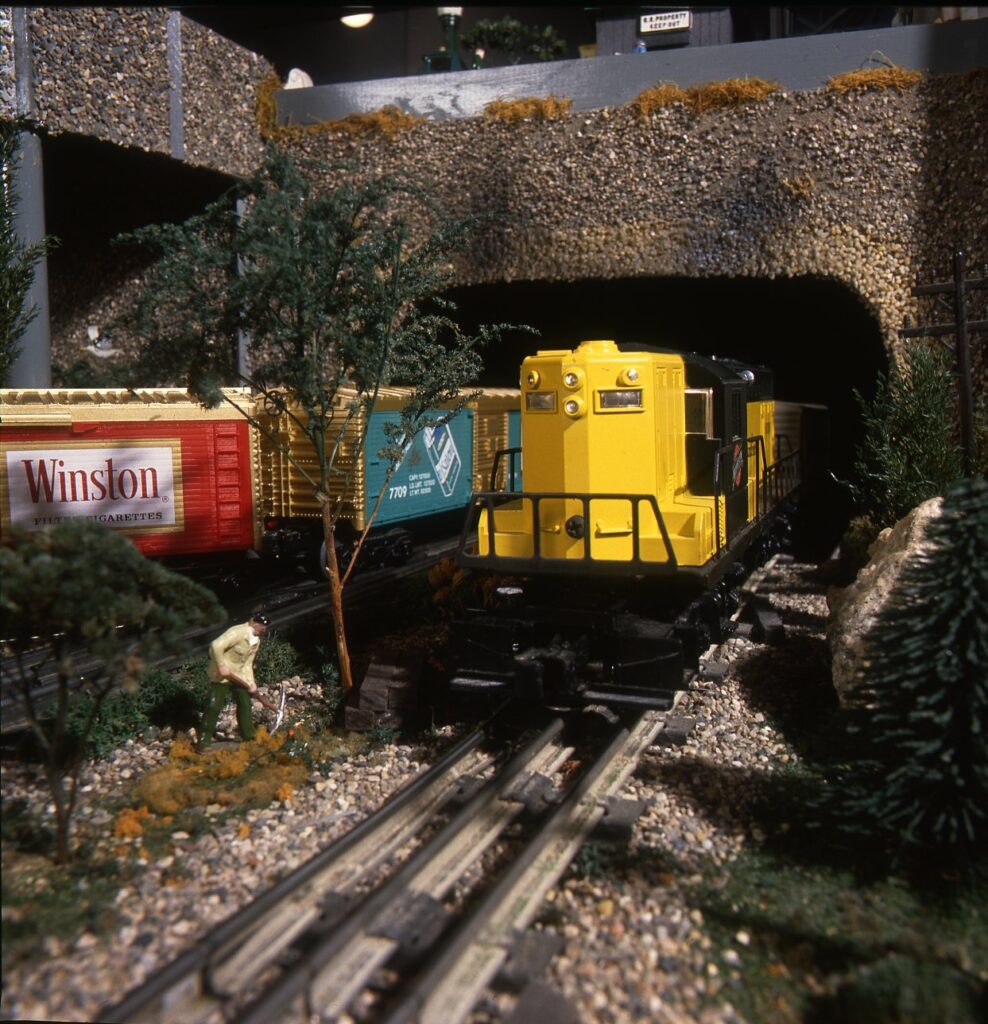 The layouts most recently showcased here have reflected the hobby activities of two of the top performers of the second half of the 20th century, each of whom has a reputation for greatness spanning the earth. In fact, if beings far out in the solar system have a toe to tap, they probably are doing so to music recorded by toy train enthusiasts Frank Sinatra and Neil Young.

Celebrities are still on our minds at Trains.com, but the gentleman we’re spotlighting now has a different kind of renown. Gil Bruck hasn’t delighted audiences around the globe. Truth be told, this talented three-rail modeler is highly respected and widely listened to only among his peers residing in the southeastern part of Wisconsin. Yet for his fellow three-railers, Gil stands tall because of the ways he has influenced the work of the Milwaukee Lionel Railroad Club and the outstanding model railroads he has designed and constructed at home.

The cover story for the December 2021 issue of Classic Toy Trains focuses on the Milwaukee Lionel Railroad Club, which is about to commemorate 75 years since it was established by the late Jerry Brettschneider. During a snowstorm in January of 1947, Jerry asked a few of his buddies living near him in Milwaukee to pass the time playing with their Lionel trains. Eventually, they formed a club with officers, dues, and a large O gauge layout.

As the article about the Milwaukee Lionel Railroad Club explains, the group has built a few impressive three-rail displays over the past decades. The latest display boasts several main lines traveling over a few levels of track. Another spectacular feature is a massive replica of the famous Hell Gate Bridge in New York City.

When preparing the article, I interviewed some of the current officers and members of the club and asked them specific questions about the creation of the extraordinary layout. Time and again, they told me that certain areas reflected the vision and ideas of Gil Bruck. A longtime contributor to the club, he had taken the lead after the organization moved to a new location in the early 21st century and started thinking about its next O gauge railroad.

People listened carefully to what Gil had in mind, especially regarding the overall look of the layout and some of the most important scenes. They did so because virtually all of them had visited his home and seen up-close how intelligently he arranged the network of track and then fashioned scenery and built from scratch noteworthy structures. If the club layout could look anywhere near as realistic and have as much detail as Gil’s home layout did, everyone involved would feel certain they had succeeded in coming up with a real masterpiece.

The 14 x 19-foot O gauge display Gil built from the ground up in the basement of at his home provided dozens of neat scenes where his prewar, postwar, and modern-era trains could star. He had in mind a railroad offering viewers industrial, agricultural, residential, and commercial sites served by freight trains headed by some of the best steam and diesel replicas.

Experience constructing and operating two previous layouts during his adult years guided Gil as he sketched out plans for this one. Like so many other modelers, he started with a compact O gauge layout (5 x 5 feet) and then graduated to a medium-size one (6 x 19 feet).

When time and resources sufficed, Gil proceeded to move ahead to the impressive and exciting three-rail layout shown here. It consists of a lower loop traversing the L-shaped platform and an upper loop in the shape of a dog-bone. The two levels are not connected.

Trains on the principal level include some passenger expresses picking up and dropping off travelers at the many different depots, notably Lionel’s popular no. 2709 Rico Station. Along the way, folks riding in the coaches and dome cars catch glimpses of small towns, a Native American settlement, and even animals traipsing through the wilderness.

Meanwhile, freight trains barrel along, handling some key raw materials and delivering finished goods to various markets. Coal, petroleum, grain, and logs serve as the foundation of the local economy. Other residents make their living by servicing the hardy locomotives.

At the heart of Gil’s modeling philosophy is an idea he acquired from building his own layouts and studying those of friends in Milwaukee and its suburbs. Namely, that details bring scenes to life and make all the difference between a railroad that looks plain and rudimentary and one that truly captivates onlookers and keeps them returning to discover more about it.

The notion that details – vehicles, human and animal figures, signs, and lights – raise any layout regardless of its dimensions is one that Gil passed along to friends in charge of constructing scenes on the Milwaukee Lionel Railroad Club’s massive railroad. He showed them how to enhance each area while avoiding the temptation to ignore making every square foot interesting and alive. Members have been extremely grateful for his wisdom ever since.

In addition, Gil encouraged the club to follow in his footsteps by constructing some of the buildings from scratch rather than depending on what assorted manufacturers had already put on the market. Similarly, he emphasized the advantages of painting the figures and fabricating trees and bushes to fill hillsides and the fields adjacent to rivers and forests.

Yet another facet to Gil’s modeling that he shared with the Milwaukee Lionel Railroad Club involved enjoying the fun and thrills generated by the operating accessories Lionel had cataloged during the postwar and modern periods of production. On his home layout were wired coal loaders, magnetic cranes, block and semaphore signals, and freight platforms.

Visitors to the Milwaukee Lionel Railroad Club won’t figure out how important Gil Bruck has been to the organization from the newspaper clippings framed on the walls around the layout or by focusing on the different vignettes. It’s only by conversing with longtime members and asking them about noteworthy areas will they get a sense of how influential he has been. That and reading his name on the list of those honored with the Founders Award.

But as a good look at Gil’s home layout makes plain, he has devoted his adult years to promoting O gauge railroading and learning everything he can about what makes a toy train layout satisfying and fulfilling. He gladly shares that wisdom with fellow club members as well as readers of Classic Toy Trains and Trains.com. We’re grateful for the education.