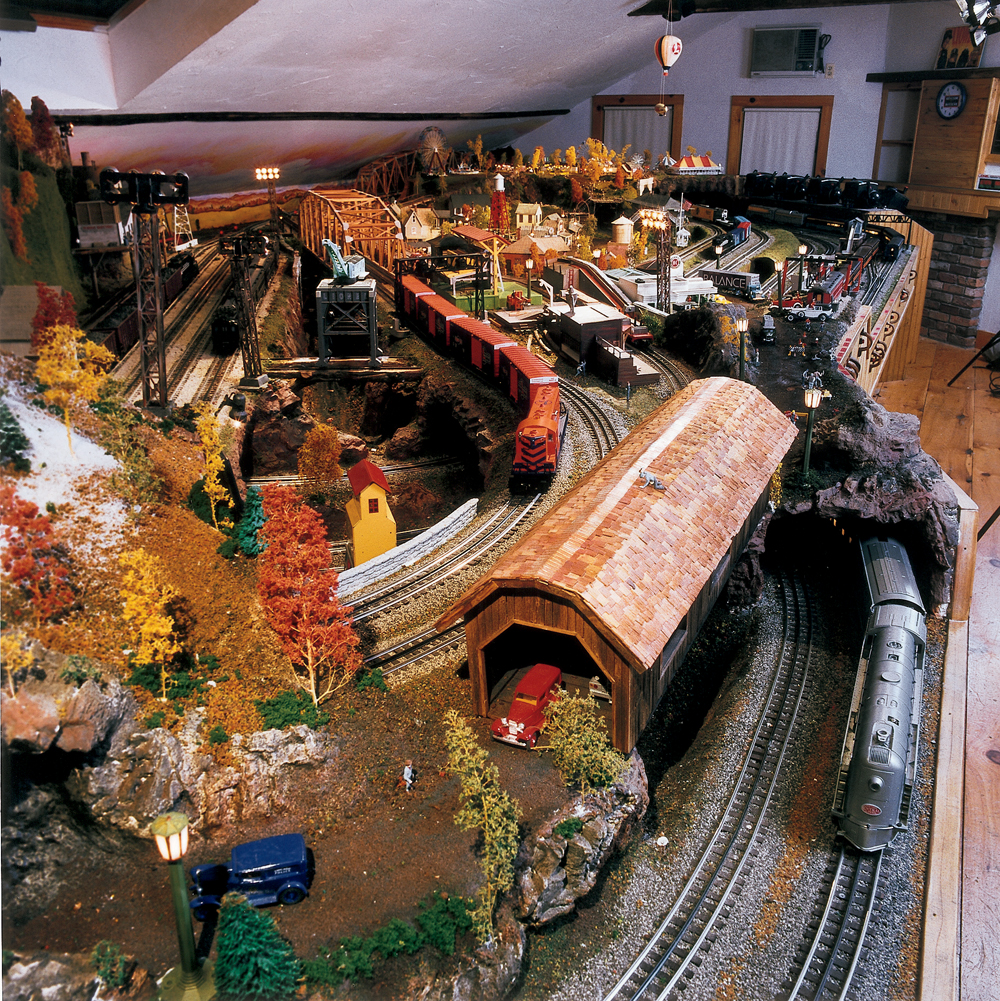 In the October 2000 issue of Classic Toy Trains, photographer William Zuback and I photographed performer Mandy Patinkin’s layout. We spent a couple of days with he and his family. Joining us was Rich Roman, whose highly successful layout building firm, East Coast Enterprises, was responsible for much of the design and look of Mandy’s layout.

Mandy shares much with Frank Sinatra and Neil Young. All touch their audiences with memorable performances and albums. All also developed an appreciation for toy trains that spanned their adult years.

Most fortunate of them all may be Mandy. His family was able to afford a Lionel outfit when he was growing up in Chicago in the early 1960s.

The pleasure of building a simple layout as a youngster never left him. Even when he was paying his dues as a performer, there was no doubt he would someday have the Lionel layout of his dreams. The only questions were if he’d have time to build it and where its home was going to be.

Time for a layout

The answers came right around 2000, when Mandy was starring on Chicago Hope, a television medical drama set in Chicago.

He and his family figured out what the layout should look like and its features. Ideas included an animated carnival, a working ski lift, and a bustling rail yard with an operating turntable. It would also have a roundhouse with stalls built in a mountainside, and a tribute to the business his family established in Chicago – People’s Iron & Metal Co.

It would also have a superb sound system. The trains would be run via command control. Mandy insisted on having the latest and greatest in toy train technology. Since his boyhood, electricity has fascinated him, especially when applied to operating Lionel trains and accessories.

What Mandy and his family ultimately named the Grody & Patinkin Railroad Co. (named for his wife, Kathryn Grody) might just as well have been named the Patinkin & Roman Railroad Co. The collaboration between the family and Rich and his crew proved to be perfect.

It wasn’t a lack of experience or skill that prevented Mandy from finishing the layout. Rather, the demands of his career meant time was always at a premium. If Mandy had insisted on doing everything, they railroad might have taken 25 years to build and troubleshoot.

Once the builders understood what Mandy, Kathryn, and their sons want they found it easy to constructing the benchwork and lay track. Electronics also went forward relatively smoothly and quickly. Together, Rich and Mandy tested everything, making sure the postwar and modern-era Lionel locomotives on the roster were operating as well as ever.

As good as Rich’s team is with trackwork, wiring, and remote controls, they are equally skilled with making scenery and structures. The mountains and forests formed an impressive environment for the track work.

Structures also came together. There were scratch-built models with the names of businesses for each family member: Kath’s Books & Café, Gideon’s Groceries, and Isaac’s Inn. Everyone had a blast running the rides and attractions filling the amusement park. As for the mountain village, it calls to mind the years Mandy and his wife lived in Colorado.

In the 20 years since Mandy Patinkin’s layout was showcased in CTT, he has has bolstered his list of career highlights. Spare time seems as scarce for him now as it did back then. Little wonder the layout, while still wonderfully maintained, has not changed significantly.

We at CTT can keep hoping new projects lie ahead for the Grody & Patinkin Railroad Co. Perhaps Mandy will slow down just enough to sketch or suggest modifications. When he does, hopefully CTT will be able to make a return visit.