Feel nostalgic with an assortment of Christmas and winter layout photos 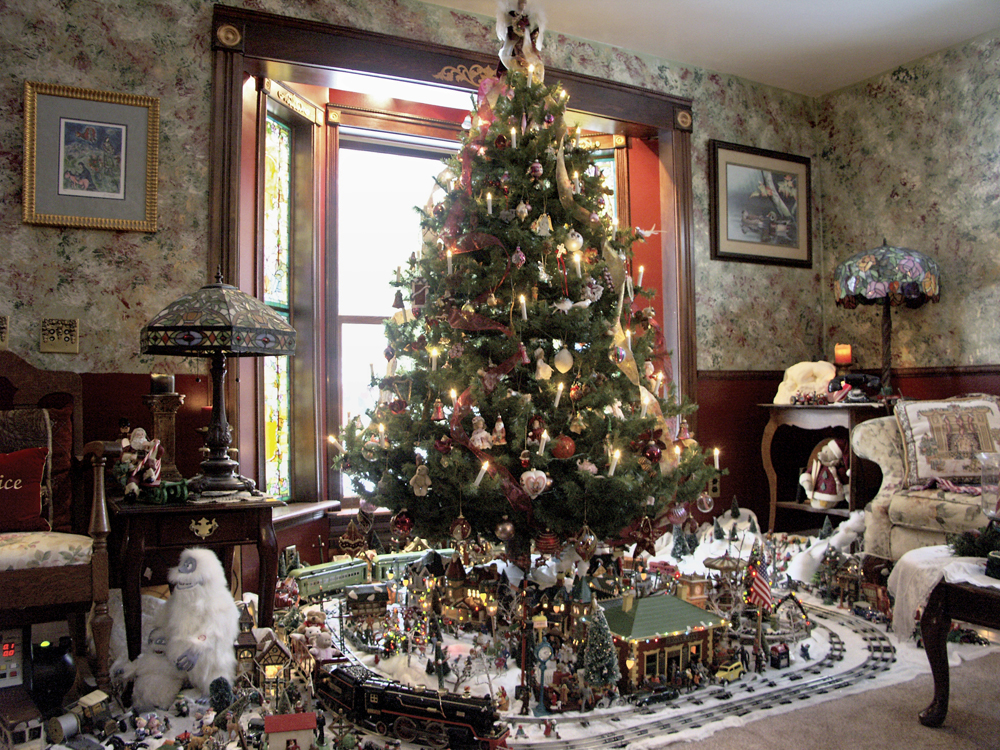 A 2021 holiday toy train photo gallery is just the thing to get you in the Christmas spirit. Please enjoy this selection of holiday-themed photos of toy trains from Lionel and American Flyer in O gauge, S gauge, and Standard gauge.

Visitors to the home of Charles Irace in Livingston Manor, N.Y., can be excused if they imagine they have been whisked back to the 1920s or ’30s. Charles, who loves antique furniture as much as his Standard gauge trains, transforms part of his house around the holidays into what can easily be mistaken for the set of a motion picture. Although we're featuring Charles' layout for this 2021 holiday toy train gallery, he annually decorates his Christmas tree with vintage lights and ornaments before setting up loops of Standard gauge track and dozens of prewar structures, signals, street lamps, and figures. Racing through this neat stage are some of his Lionel freight and passenger outfits. Walk in and you’ll expect to hear Kate Smith or Rudy Vallee singing over the floor radio and a Model A Ford parked outside.

Every family has its own traditions associated with the holiday season. For some, Christmas can mean children accompanying their parents to a nursing home to sing carols for the elderly and infirm. Other clans feast year after year on sugar cookies cut out like little Christmas trees or Santas or on the potato pancakes that are part of the Chanukah celebration. Still other families, probably a majority of those that read Classic Toy Trains, make putting up a special electric train set a central part of every December. Wayne Nolasco, of Atco, N.J., typifies what happens in many households. With his children and grandchildren, he keeps alive a great tradition that his father inaugurated about 60 years ago with an American Flyer set. Today, Wayne and his family prefer one of Lionel’s new O gauge outfits, such as the no. 31952 Great Northern Glacier Express freight train, which was cataloged in 2004.

As the holidays approach, William Roberson usually takes his Department 56 structures out of their boxes and arranges them in a setting as flat as the terrain near his home in Topeka, Kans. Everyone who sees Bill’s temporary layout wants to take home his gleaming Lionel O gauge no. 299W Union Pacific City of Denver passenger train from the late prewar period. This three-car outfit, with a no. 636W power car on the head and two no. 637 coaches and a no. 638 observation trailing behind, brings back terrific memories of America’s streamliner era.

Ask Richard Wilen what kinds of electric trains he prefers to run on his O gauge layout, and he’ll reply that he likes all types as long as they’re packed in Lionel boxes. In other words, you won’t find anything other than Lionel motive power and rolling stock in his train room in Winfield, Ill. He means sets and more that span the entire postwar and modern eras: 1945 to the present. When Richard’s grandchildren visit during the holiday season, he puts the old-timers away and places some of the finest new trains on his three-rail track. The Polar Express and Thomas the Tank Engine put smiles on the faces of the youngsters; Richard, like many other readers of Classic Toy Trains, retains a soft spot in his heart for the gallant Santa Fe F3 diesels. He runs reissues and displays his vintage models.

Truth be told, David Moore confesses that he is a scale modeler who specializes in HO on his main layout in North Beach, Md. Every December, however, he takes out the two Lionel outfits that belonged to his father, along with five American Flyer buildings from the A.C. Gilbert Co. line and creates a unique O-27 layout beneath his family’s Christmas tree. “It’s wonderful to see my children and others sit there with their noses to the edge of the display, watching the trains go ’round and ’round. I begin to feel as though I’m seven years old again and get down there nose-to-layout with them.” For this picture, David coupled together his dad’s Lionel no. 1605W six-car diesel freight set from 1958, which was led by nos. 208P and 208T Santa Fe Alcos. At other times, he runs a no. 1437WS set, which was cataloged in 1947 with a no. 2025 steam engine and four freight cars.

Even people who don’t consider themselves toy train hobbyists enjoy viewing public displays of miniature electric trains. That’s long been the case in the biggest cities and smallest towns. Mike Blakesley and Ray Deering can attest to the truth of these statements because they have built a popular O gauge layout in an auto parts store in Forsyth, located in the southeastern corner of Montana. Residents and folks who live in nearby communities make it a point to stop by Valley Auto Supply between the middle of November and the first part of January to observe impressive winter scenes like this one on what Mike and Ray named the BBB&D Railroad, an L-shaped layout that was featured in the December 2008 CTT. Ali Dinstel captured that Lionel Santa Fe 4-8-4 steam locomotive as it guided a train past Department 56 structures on a frigid December morning.

The unforgettable displays that youngsters and their families admired in department stores large and small so long ago inspired William Wilson to develop this delightful scene for his O gauge layout. All but overwhelming visitors to his home in Rockville, Md., it features Lionel trains from the prewar, postwar, and modern eras. You can enjoy the antique no. 258 steam locomotive on the lowest track or check out the no. 2035 engine and tender from 1950-51 on the uppermost line. Bill directs children to the assortment of Disney characters made by Marx as well as Santa Claus and his eight reindeer. Older folks love the porcelain structures that were selected from recent Department 56 and Lemax catalogs. This O gauge wonderland, like layouts once seen in Macy’s, Marshall Field’s, the May Co., and other great retailers, demands plenty of time if you hope to see everything. So take your time and look for every train, structure, and detail!