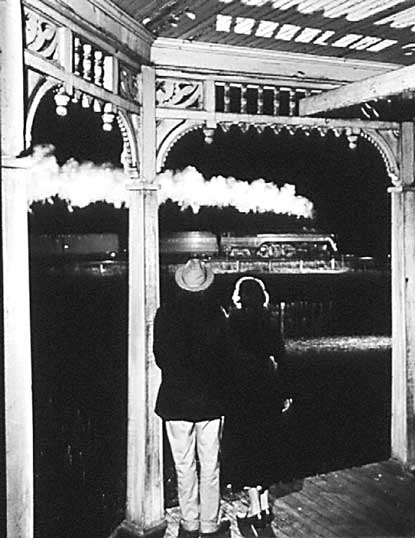 Terry Friend and Minnie Tate pose with Norfolk & Western Train 42 in a spoof of a famous 1875 advertising poster.
O.Winston Link 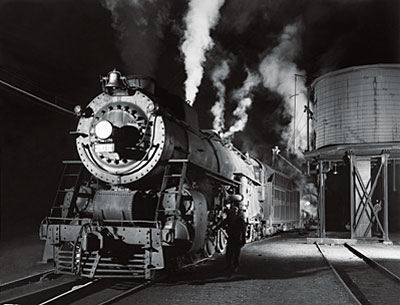 N&W K1 4-8-2 104 is serviced at Bristol, Va.
O. Winston Link
Master photographer O. Winston Link attained critical acclaim in the fine-art world for his striking nighttime views of the last days of Norfolk & Western steam locomotives from 1955 to 1960. Link’s photographs showed, as no one else has, the railroad’s place in the everyday life of American communities.

Born in 1914, Link earned a degree in civil engineering at Polytechnic Institute in Brooklyn in 1937. Following graduation, he took a job as a photographer with Carl Byoir & Associates, a large public-relations firm.

As an independent industrial photographer after World War II, he attracted large corporations as clients, providing him with the credibility and know-how to make his now-famous photography proposal to Norfolk & Western railroad management in 1955. During his 5-year project on the N&W, Link made about 2400 negatives, about 225 of which have been exhibited or published, most significantly in two lavish books, Steam, Steel & Stars and The Last Steam Railroad in America.

In addition to his photographs, Link also produced five LP recordings of N&W steam, and a 45 rpm. Link was unapologetic in his love for steam locomotives. “A world without steam engines would be almost as bad as a world without women, Beethoven, autumn foliage, or peppermint-stick ice cream,” he wrote in TRAINS magazine in 1957.

Link was honored in Vanity Fair magazine as one of “photography’s most enduring master” in its January 2001 issue (published the month of Link’s death), where he was photographed posed on the steps of mothballed N&W 2-6-6-4.

“We had no idea of anything, and absolutely no concept of how much time we were ‘wasting,'” Link said of the sound recordings that complemented his photography, detailed in the Summer 2001 issue of Classic Trains magazine. “I did it because it was fun. I wanted to get a recording of the era of steam and these beautiful engines.”

One thought on “O. Winston Link”