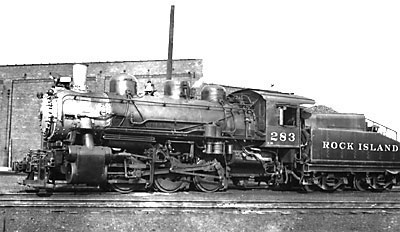 Like the 0-4-0, the 0-6-0 could not easily traverse the poor track of the day, and within twenty years was rendered obsolete by the introduction of the 2-6-0 and 4-6-0. These newer locomotive types had flexible suspension systems that could accommodate irregular track and had engine trucks capable of leading the locomotive into curves – improvements that permitted higher train speeds. The 2-6-0 and 4-6-0 quickly became the standard power in situations where more tractive effort was needed than could be provided by a four-coupled engine.

Many years later, however, the 0-6-0 reappeared as a switch engine. It bore little resemblance to its predecessor, having been updated with the technological improvements made to other steam locomotives in the intervening years.

It distinguished itself with its ability to handle bigger trains than the 0-4-0 switcher. Soon, the 0-6-0 became the favored engine in railroad yards. By 1904, over 4,800 were in service.

When train lengths eventually grew beyond the ability of the 0-6-0 for heavy switching work, the 0-8-0 superseded it. Nevertheless, the 0-6-0 remained a popular engine for certain yard that did not require the heft of an 0-8-0. The 0-6-0 found a ready home switching passenger trains and working small yard and industrial switching jobs.

Southern Pacific converted several of its 0-6-0 switchers into tank engines and assigned them to work in shops and roundhouses. Nos. 221 (Rogers, 1881) and 567 (Baldwin, 1903) – the latter decked in “Daylight” streamlining – were photographed at Taylor Yard in Los Angeles in 1940.
R. B. Callen
In its 75 years as a switch engine, the 0-6-0 received the latest locomotive technological innovations. In the second decade of the 20th century, new 0-6-0s were built as full-sized engines equipped with superheaters, piston valves, and modern valve gear. Later, many had front end throttles. On the Union Railroad, a few even had tender boosters.

An important milestone in the locomotive’s evolution was the introduction of the standardized United States Railroad Administration 0-6-0 in 1918. It was one of twelve standardized locomotive designs conceived and manufactured while U.S. railroads were under the control of the federal government during World War I. The USRA design embodied many of the best features of 0-6-0s built to date, and the great majority built afterward owed something to it.

A number of railroads owned 0-6-0s far exceeding the dimensions of the USRA design. Pennsylvania Railroad’s class B-6 switchers had a weight of 180,300 lbs., compared to the 165,000 lbs. of the USRA engine. Pennsy 0-6-0 No. 5244 was the last PRR steam locomotive to operate in regular service.

Even heavier 0-6-0s could be found on several short lines that served the steel industry in the Ohio River Valley. Youngstown & Northern’s engines – perhaps the biggest 0-6-0s built – weighed 203,200 lbs. Not far behind were Union Railroad’s 0-6-0s, weighing 201,400 lbs.

Almost all railroads had 0-6-0s on their roster at some point in time. By the time the last one was delivered in 1946, more than 15,000 had been built – the most of any steam switcher in North America.

One thought on “Steam locomotive profile: 0-6-0”