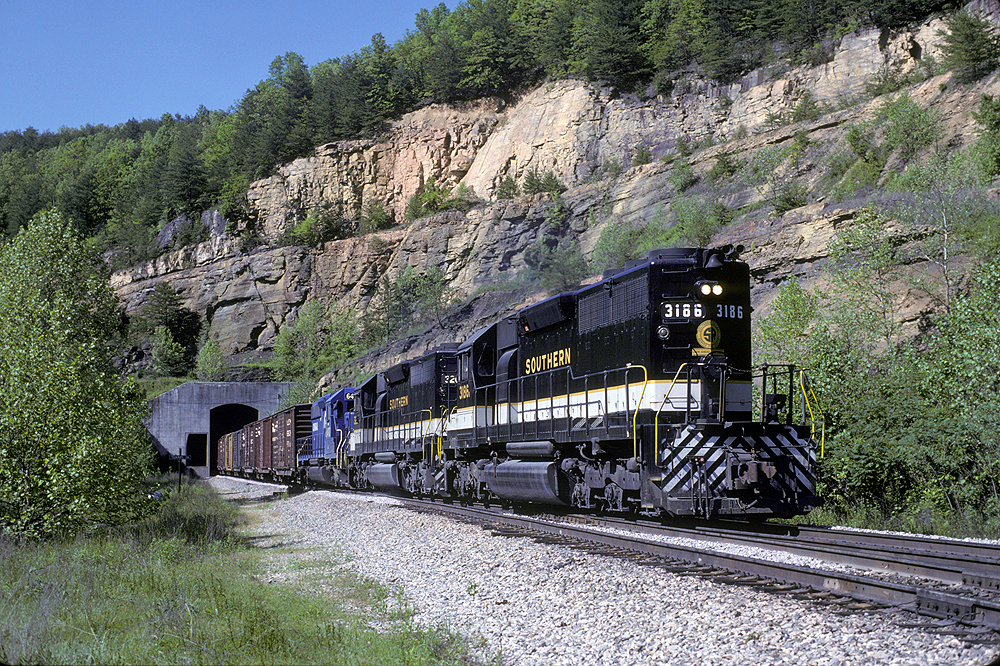 Southern Railway history: The earliest portion of the Southern Railway was the South Carolina Canal & Rail Road Company, which was chartered in 1828 to build from Charleston, S. C., to Hamburg, S. C., on the north bank of the Savannah River. Its purpose was to bring trade to the port of Charleston from inland points and divert trade that would otherwise move down the Savannah River to the port of Savannah, Ga. When the 136-mile line opened in 1833, it was the longest railroad in the world. By 1857 it was part of a line from Charleston to Memphis, Tenn.—at the time the longest connected system of railroads in the world. (Two of the railroads involved, the Georgia Railroad and the Western & Atlantic, are now part of CSX Transportation.)

The Southern Railway system, like many other railroads, grew by merger and acquisition, and the components retained their identities and corporate structure long after most other roads had absorbed their subsidiaries.

In 1863 the R&D purchased a majority of the stock of the Piedmont Railroad, under construction from Danville to Greensboro, N. C. The line opened in 1864, and the R&D leased it in 1866. In 1871 the R&D leased the North Carolina Railroad, which was opened in 1856 from Goldsboro through Greens­boro to Charlotte.

The R&D contracted to construct the Northwestern Railroad of North Carolina from Greensboro to Salem, and assisted the Atlanta & Richmond Air-Line Railroad with the construction of its line between Atlanta and Charlotte.

Both those routes were opened in 1873. The Atlanta & Charlotte Air-Line Railway was organized in 1877 as the successor to the Atlanta & Richmond. It was leased to the Richmond & Danville in 1881. In 1881 the R&D purchased the Virginia Midland Railway from the Baltimore & Ohio to get a direct Danville–Washington route about 20 miles shorter than the route through Richmond. The Virginia Midland had begun as the Orange & Alexandria Railroad, opened from Alexandria, Va., across the Potomac River from Washington, D. C., southwest to Gordonsville, in 1854. Through trackage rights on a C&O predecessor and further construction, it reached Lynchburg in 1860. It came under control of the state of Virginia in 1867, and in 1872 the Virginia & North Carolina Railroad was organized to consolidate the Orange, Alexandria & Manassas Gap (successor to the O&A) and the Lynchburg & Danville Railroad, under construction be­tween the cities of its name. The Baltimore & Ohio obtained control and named it the Washington City, Virginia Midland & Great Southern Railroad. The extension to Danville was completed in 1874, and in 1880, a cutoff from Orange to Charlottesville was opened. The company was reorganized as the Virginia Midland Railway in 1881.

In 1886 the R&D leased the Western North Carolina Railroad, which had been constructed from Salisbury west through Old Fort (1869) and Asheville (1879) to a connection at the Tennessee state line with the East Tennessee, Virginia & Georgia.

The Georgia Pacific Railway was chartered in 1881 to build a from Atlanta to a connection with the Texas & Pacific at Texarkana. It was opened as far as Columbus, Miss., in 1887. It was leased to the Richmond & Danville in ­January 1889, shortly before it completed its line as far as the Mississippi River at Greenville, Miss. The Mississippi portion of the GP, which had remained a separate entity, was cast off as the Columbus & Greenville in 1920.

The Southern Railway was chartered in 1894 to acquire the properties of the Richmond ­Terminal. The system comprised lines from Alexandria, Va., to Columbus, Miss.; from Chat­tanooga through Atlanta to Brunswick, Ga.; from Memphis through Chattanooga to Bristol, Va.; from Selma, Ala., to Rome, Ga.; and from Danville, Va., to Richmond.

The Southern acquired other railroads; among the larger ones were the Georgia Southern & Florida Railway in 1895 and the Louisville, Evansville & St. Louis Consolidated Railroad in 1898.

The Southern acquired a number of subsidiaries over the years. Many retained independent status, and the continued existence of these subsidiaries was attested to by initials on locomotives and cars.

The Alabama Great Southern was incorporated in 1877. It was the successor to the Alabama & Chattanooga Railroad, whose predecessors had been chartered in 1852 and 1853, consolidated in 1868, and opened in 1871. Its main line stretched from Chattanooga to Meridian, Miss., 292 miles. Southern acquired the minority interest in AGS in 1969.

The New Orleans & Northeastern Railroad was incorporated in 1868 but lay dormant until 1881, when control was acquired by the Alabama, New Orleans, Texas & Pacific Junction Railways Ltd. Construction began in 1882, and the line was opened between New Orleans and Meridian, Miss., 196 miles, in 1883. The Southern purchased the NO&NE in 1916. The Alabama Great Southern merged the NO&NE in 1969.

The Cincinnati Southern Railway was incorporated in 1869 to build from Cincinnati to Chattanooga, 336 miles. It opened in 1880. The railroad was owned (and still is) by the city of Cincinnati. The Cincinnati, New Orleans & Texas Pacific was chartered in 1881 and immediately leased the CS for operation. The CNO&TP was controlled by the two British-owned holding companies previously mentioned, which also controlled the Alabama Great Southern and the New Orleans & Northeastern. The Southern and the Cincinnati, Hamilton & Dayton (Baltimore & Ohio) acquired control of the CNO&TP in 1895, but through its control of the Alabama Great Southern, which held an interest in the CNO&TP, Southern effectively had control. Southern acquired B&O’s interest in 1954.

The two Vicksburg railroads, which were controlled by the Alabama, New Orleans, Texas & Pacific company, became part of the Illinois Central system in 1927. The Alabama Great Southern and the CNO&TP were considered Class 1 railroads in their own right until corporate simplifications took effect.

The Georgia Southern & Florida Railway was incorporated in 1895 under Southern Railway control as a reorganization of the Georgia Southern & Florida Railroad, which had opened in 1890 from Macon, Ga., through Valdosta, Ga., to Palatka, Fla. It was intended to be part of a route from Birmingham, Ala., to Florida that would bypass Atlanta. In 1902 it purchased the Atlantic, Valdosta & Western Railway line from Valdosta, Ga., to a point near Jacksonville, Fla. Southern acquired control in 1895.

The Cape Fear & Yadkin Valley Railway was an 1879 reorganization of the Western Railroad of North Carolina, which opened in 1860 from Fayetteville to Cumnock, 6 miles north of Sanford. By 1890 the CF&YV had a line from Wilmington through Fayetteville, Sanford, and Greensboro to Mount Airy and another from Fayetteville southwest to Bennettsville, South Carolina. The company entered receivership in 1894.

In 1899 it was sold at foreclosure and split between the Atlantic Coast Line, which acquired the Wilmington–Sanford and Fayetteville–Bennettsville lines, and the Southern, which organized the Atlantic & Yadkin Railway to take over the rest, from Sanford to Mount Airy. The A&Y was operated by the Southern Railway, which controlled it, until 1916, when it assumed its own operation. The Southern merged the company and resumed operation of the road on Jan. 1, 1950.