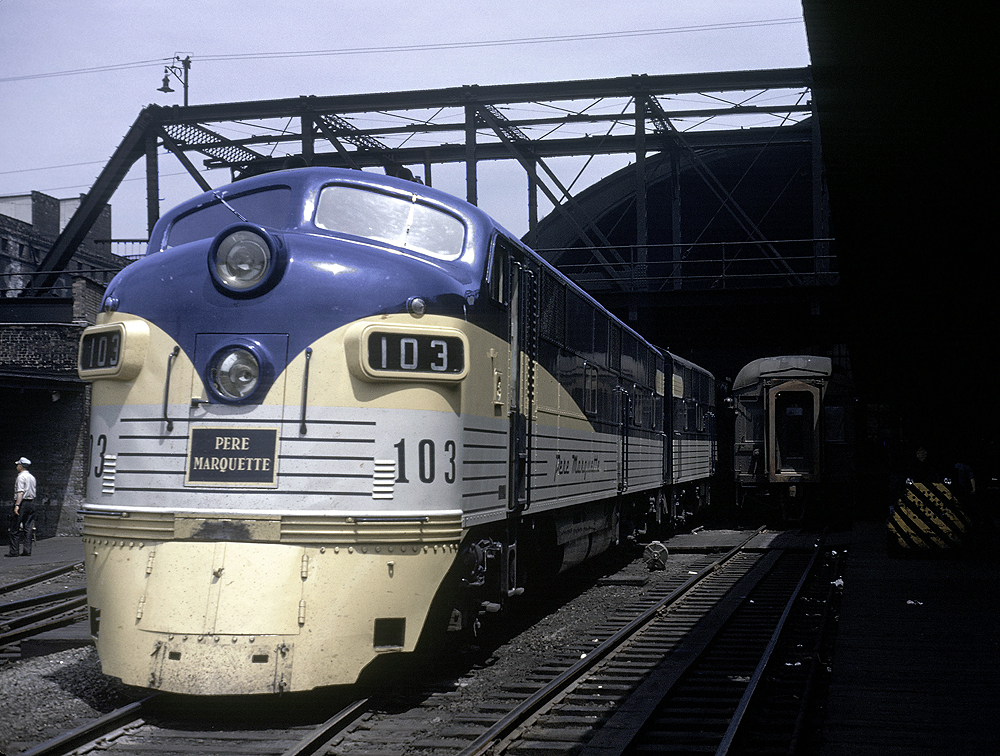 Chasing the spirit of the Pere Marquette

When I first encountered the former Pere Marquette Railway as a boy in southwestern Michigan in the late 1950s, I never realized what a powerhouse it had been. My lazy summers were interrupted by frequent trips to the Lake Michigan beaches south of St. Joseph, but as much as I loved hiking the great dunes and horsing around in the surf, for me the highlight of our trips was staring out the window of Dad’s Plymouth Belvidere, hoping to glimpse a nifty blue-and-yellow streamliner streaking alongside the Red Arrow Highway.

I didn’t yet know this was the old PM, for the side of the train was lettered “Chesapeake & Ohio.” Still, to me, it was exotic: a quiet, single-track railroad wandering through sandy resort country, quite different from the imperious, double-track New York Central that bisected my hometown of Niles, 35 miles away.

Years later, I learned that my beachcomber railroad was a heavy-duty property, as much a part of Michigan’s muscular industrial scene as NYC, Grand Trunk Western, or any other carrier. PM had been a critical artery in the automobile business, linking the booming blue-collar cities of Detroit, Flint, Lansing, and Toledo. It brought mass quantities of parts and raw materials to the factories of Ford, General Motors, and Chrysler, and took from them an endless stream of finished cars and trucks. Its flashy postwar namesake passenger trains reignited the streamliner era, and once upon a time, PM fielded a fleet of very special steam locomotives.

History and major developments of the Pere Marquette
C&O’s formal acquisition of the Pere Marquette in 1947 did more than help usher in the postwar merger era; it also closed the book on a railroad with a colorful and quirky history. PM was created in 1900 by the consolidation of three roads: Flint & Pere Marquette; Detroit, Grand Rapids & Western; and Chicago & West Michigan. (The town of Pere Marquette; today we know the place as Ludington. Jacques Marquette, the French missionary and explorer, died and was buried here in 1675, and the name Pere Marquette had been given to the inlet lake off Lake Michigan, the river that feeds into it, and an 1847 community there.)

All three carriers had roots in the lumber industry, so the new Pere Marquette Railroad not only connected important Michigan cities, it also operated a branchline network covering much of the state’s Lower Peninsula. PM’s early corporate history was chaotic, marked by receivership and ownership changes. The Cincinnati, Hamilton & Dayton acquired PM in 1904 and for a time leased it to various parties, including the Erie Railroad. Thus did Baltimore & Ohio briefly control the PM through its ownership of the CH&D. When Pere Marquette came out of a receivership in 1907, it would be for only five years.

Those early, troublesome times, however, were marked by two strategic steps forward. One was the chartering of the Pere Marquette of Indiana, which built from New Buffalo, Michigan, southwest to Porter, Indiana, allowing PM to reach Chicago, via trackage rights on the Lake Shore & Michigan Southern (NYC). The second was the lease of the Lake Erie & Detroit River Railway, pushing PM eastward from Walkerville (Windsor), Ontario, to St. Thomas, thence to Suspension Bridge (Niagara Falls), New York, via rights on Michigan Central affiliate Canada Southern, and on to Buffalo on the NYC. Patched together as they were, these additions allowed PM to position itself as a Buffalo–Chicago bridge carrier.

A water route around Chicago
For shippers who preferred to avoid Chicago, PM offered a route from Toledo to three ports in Wisconsin via Lake Michigan carferries that began sailing out of Ludington in 1897. The ferries became romantic trademarks of the Pere Marquette. Operated in a first-class manner for passengers, the boats carried a respectable amount of rail freight traffic for decades until their importance faded in the 1970s. Today’s S.S. Badger, introduced by C&O in 1953 and now operated seasonally between Ludington and Manitowoc, Wisconsin, by a private firm for passengers and motor vehicles only, is the last remnant of PM’s halcyon carferry era.

The modern PM came of age in 1917 when it was incorporated as the Pere Marquette Railway. With automotive manufacturing poised to explode, PM was in a great position to assert itself as an important Midwestern carrier. Its strategic location attracted the Van Sweringen brothers of Cleveland, who controlled a vast empire that included C&O, Erie, and Nickel Plate. The “Vans” saw PM as a natural link for coal into Michigan off the C&O, so in 1924 they took control of it. With that, interchange off C&O’s Hocking Valley in Toledo became PM’s largest traffic source. The Interstate Commerce Commission approved C&O’s outright control of PM in 1928.

PM solidified its hold on the northwestern Lower Peninsula in 1931 by taking control of neighboring short line Manistee & Northeastern. The M&NE, which dated from 1887, reached up to Traverse City and the Leelanau Peninsula, and PM combined portions of its and M&NE’s lines. C&O would not formally merge with the M&NE until 1955. 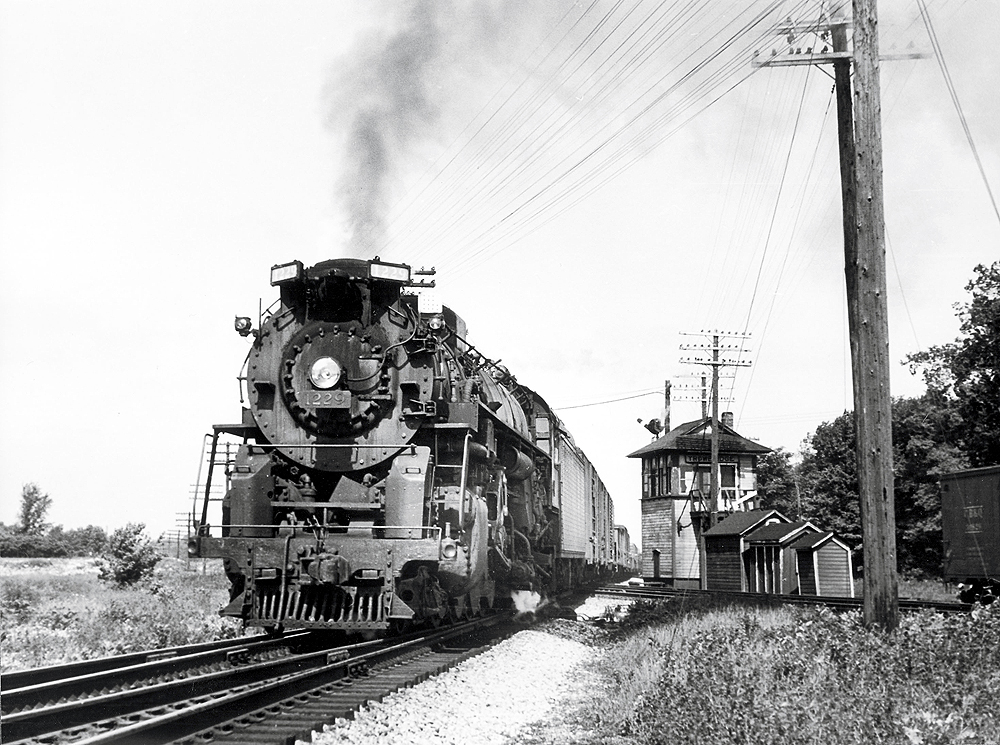 At 9:50 a.m. June 24, 1950, at the old Trowbridge Tower in East Lansing, Berkshire 1229 eases across the GTW diamonds and enters the siding to meet train 3, a Pere Marquette streamliner.
James R. Stiefel

Motive power for the big leagues
Joining railroading’s “big leagues” in the 1930s forced Pere Marquette to take a long look at its motive power. With its lumber-industry roots and perennially poor financial condition, the road had a locomotive roster full of soon-to-be-obsolete USRA-era 2-8-2s and 2-10-2s. Trains were short, yet doubleheading was common. It was the kind of roster you’d expect on a low-volume Great Plains granger, not a Great Lakes heavy hauler.

The motive-power experts at PM’s Wyoming Shops in suburban Grand Rapids decided to crank up the muscle. They settled on one of the iconic locomotives of the emerging Super-Power era: the 2-8-4 Berkshire, as prescribed by the Advisory Mechanical Committee, a group with representatives from all Van Sweringen roads. Lima Locomotive Works got the first order, for 15 1200-series N-class 2-8-4s, and delivered them in 1937. Subsequent Berk orders, also from Lima, came in 1941 (12 N-1’s) and 1944 (12 N-2’s).

With their clean, classic appearance and size, the Berks soon became the symbols of the railroad, helping PM put aside its reputation as a 19th-century logger and resort passenger hauler. But it was still the PM — watchful over every dollar. Although the 1200s were roughly the equivalent of their Nickel Plate S-class cousins, concessions by the budget-conscious PM included built-up frames instead of one-piece castings, plain bearings instead of roller bearings, and simple Standard MB stokers instead of the newer Duplex model.

While the sterling reputation for the Lima Berkshire was most prominently linked to NKP’s engines, PM’s near-duplicates met the standard. The 2-8-4s gave PM a reliable, high-horsepower locomotive capable of moving heavy tonnage on demanding schedules over a gently rolling main line. This drive toward PM’s first truly modern locomotives was fueled not only by the demands of the automotive business, but also by its growing overhead traffic, which moved mainly between the Erie and NYC to the east and western connections in Chicago.

The ability to run fast freight was critical for the bridge traffic. Case in point: trains 40 and 41, the Overnighter, a high-priority Chicago–Detroit service inaugurated in 1939. It hauled the usual mix of through cars and carload freight, but is also was scheduled to compete with trucks in the less-than-carload (LCL) market, offering pre-dawn delivery in either city for freight delivered by late afternoon. The delivery times nearly matched those of express shipments carried on PM’s passenger trains. The service was promoted heavily, including by ads in passenger timetables, and it was all possible because of the 2-8-4s. 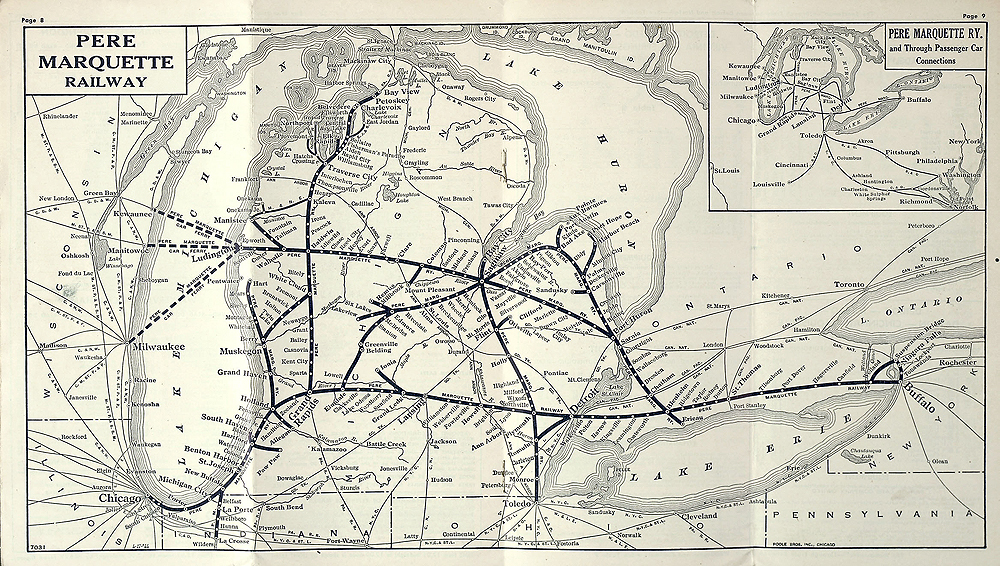 Bigger than it looked: This map, from a 1944 PM timetable, shows the roughly 600-mile breadth of the system (Wisconsin to Buffalo). 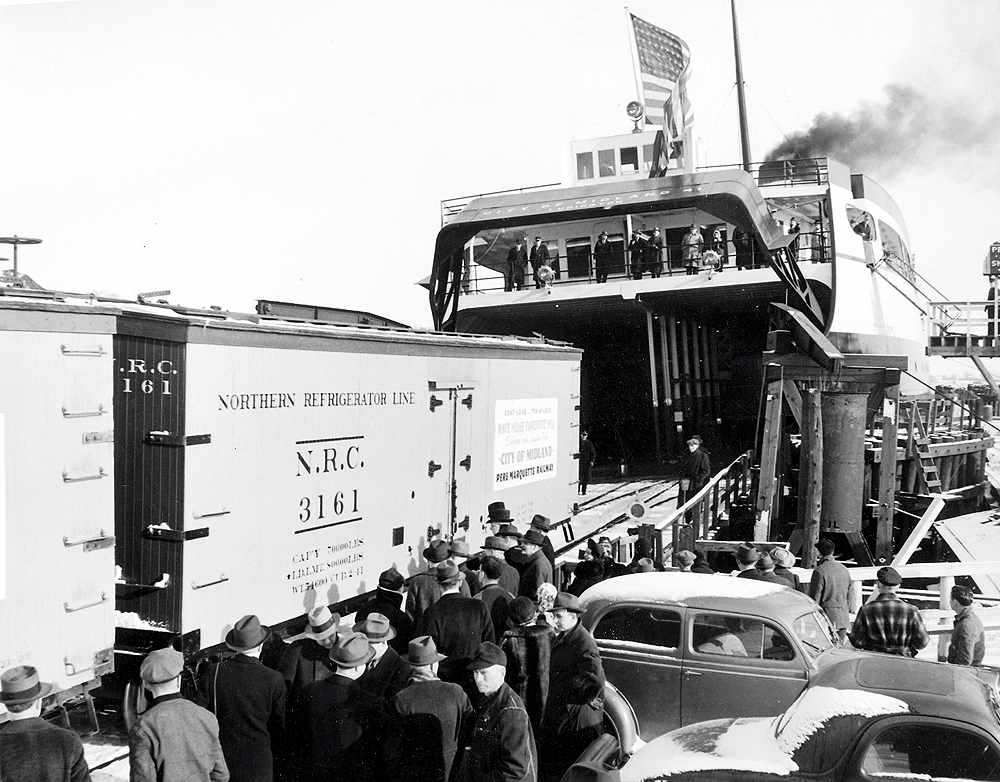 Pere Marquette passenger service
Pere Marquette’s passenger trains had been making do with smaller power, mostly 27 light Pacifics built by Baldwin and Alco (Brooks) during 1910–21. Most of the timetable was full of short, speedy day trains linking Chicago, Grand Rapids, Saginaw, and Detroit, trains such as the Furniture City Special, Peninsular, and Business Man’s Special — hardly the stuff of legend, but memorable to Michiganders just the same. Only the seasonal Resort Special, which brought Chicago vacationers to the northern resorts of Traverse City and Petoskey, gained any real fame.

As the postwar era began, PM turned things up. The Van Sweringen roads had been acquired by financier Robert R. Young, who had a taste for trendy new passenger trains. For a conservative road like PM, what came next was a radical departure: two diesel-powered, yellow-and-blue trains called the Pere Marquettes. The railroad billed them as “the nation’s first postwar streamliners.”

Even now, the Pere Marquettes impress. In their original 1946 configuration, they were matched, gleaming, seven-car Pullman-Standard coach trains, each pulled by a new Electro-Motive E7. The first two trains ran between Grand Rapids and Detroit, then fleet expansion also put them in Grand Rapids–Chicago service. The cars were nice, of course, but what was most remarkable about the Pere Marquettes was the near-flawless performance of the E7’s (which totaled eight, Nos. 101–108, by 1947). Frugal PM set out to protect a demanding schedule with as few trainsets as possible, and the redoubtable E’s did the trick. Suddenly, the low-profile PM was marked by the bold swashes of color on E7’s awaiting departure from Detroit’s riverfront Fort Street Union Depot and Chicago’s Grand Central Station.

Alas, the colorful trains were the railroad’s last big statement as an independent. As World War II ended, Young and his lieutenants in Cleveland were already planning C&O’s absorption of PM, which occurred on June 6, 1947.

As for the famous Berkshires, they, along with all of Pere Marquette’s steam locomotives, were retired by 1951. Eleven found a temporary reprieve on C&O’s Chesapeake District in Kentucky and West Virginia, but only for a few months. Two, 1223 and 1225, survived as display items in Michigan, and as a student at Michigan State University, I became involved with the restoration of the 1225, which today occasionally operates on excursions.

Perhaps it’s fitting that the Pere Marquette’s last equipment order as an independent railroad was in 1947 for six of EMD’s 1,500 h.p. BL2 “branchline” diesels, Nos. 80–85. Chosen to negotiate PM’s web of secondary lines — most of them rooted in the road’s origins as a logger — the homely diesels were as quirky and as singular as the PM itself. Pointedly, even though they sported the “speed striping” as found on the E7’s, the BL2’s were delivered in full “Chesapeake & Ohio” lettering.