The Texas & Pacific Railway is Classic Trains' Railroad of the Month for June 2020. 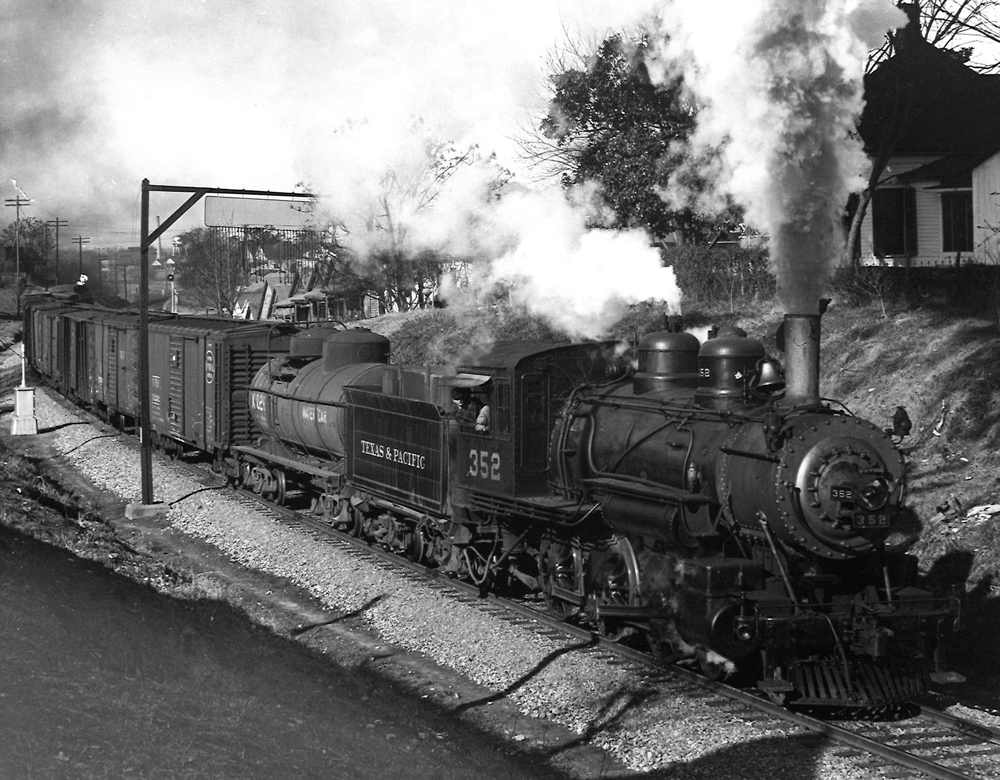 Texarkana–Shreveport mixed train
Ten-Wheeler 352 leads Texas & Pacific’s Texarkana Local, a mixed train known as “The Bullet” because of its slow schedule, into Shreveport, Louisiana, in about 1942. The oil-fired 4-6-0 trails a tank car of extra water.
Ed Robinson

Under a Texas sky
Trackmen stand back to let a Texas & Pacific 2-10-4 pass with a freight climbing Baird Hill, about 15 miles east of Abilene, Texas.
Texas & Pacific Railway

Tower 55, Fort Worth
Texas & Pacific F7A 1553 and a Missouri Pacific GP7 lead a freight train across the diamonds at Tower 55 in Fort Worth on January 30, 1955. T&P’s landmark general office building is visible above the train.
R.S. Plummer

Oil train
One of Texas & Pacific’s staple commodities was oil, evidenced by 2-8-2 804 wheeling a train heavy with tank cars west of Fort Worth near the Brazos River in the early 1940s.
C.M. Clegg

T&P-Katy meet
Steam meets diesel at Denton on the joint track used by Texas & Pacific and Missouri-Kansas-Texas between Fort Worth and Sherman, Texas. T&P 2-10-4 603 passes on the main as Katy F3s wait in the siding in this April 1949 scene.
Charles M. Mizell Jr.

Flood duty for a “foreign” 2-8-2
When flooding from the Red River west of Alexandria, Louisiana, covered Texas & Pacific’s main line in 1957, the dieselized T&P borrowed a 2-8-2 from Fort Worth & Denver to drag trains through the water that would damage diesels’ traction motors. To guard against a repeat, T&P in January 1958 bought a different FW&D Mikado and gave it the number 400. During the 2-8-2’s one call to action, in May ’58, it’s seen replacing F7s on freight 54. Other diesels will take over beyond the flooded track.
A.E. Brown

Steaming out of Texarkana
The head brakeman rides the top of the tender as Texas & Pacific 2-8-2 805 pulls out of the Texarkana yards with a westbound string of gondola cars in 1951. The following year, T&P retired its last steam engines.
R.S. Plummer

All this month — June 2020 — Classic Trains editors are celebrating the heritage, history, and images of the Texas & Pacific Railway.

Please enjoy this photo gallery of images from the David P. Morgan Library archives at Kalmbach Media that include TP diesel- and steam-powered freight trains through time.

You might also enjoy this Texas & Pacific history article from Classic Trains or a photo gallery of TP passenger trains!