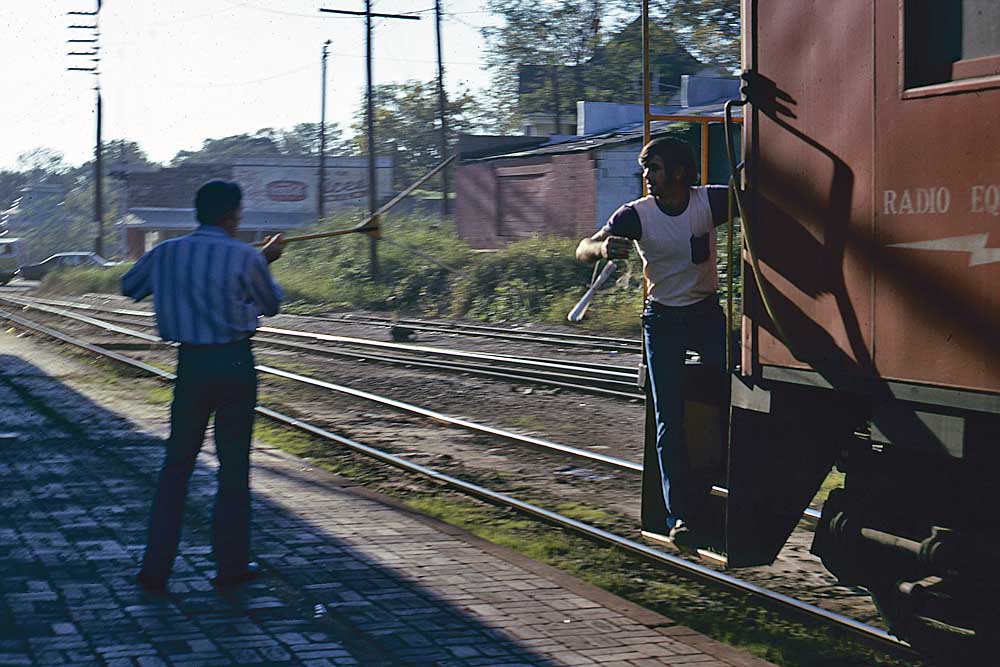 Frisco freight trains: Classic Trains editors are celebrating the history and heritage of the St. Louis-San Francisco Railroad all through May 2022. Please enjoy this photo gallery of Frisco freight trains selected from the archives of Kalmbach Media’s David P. Morgan Library.

Westbound Frisco freight train No. 39 with GP38-2 No. 423 on the point heads west 1 mile west of the Pacific, Mo., depot on Oct. 16, 1976. The trailers loaded on flatcar are examples of how the traffic was handled at the time. Paul H. Dalman photo

On second 33, a “true vision”— fancy 4-8-4 No. 4500 with “Meteor” on its tender to promote the road’s passenger service. The train is seemingly made up entirely of tank cars. Robert F. Collins photo

At Sapulpa, Okla., out from Cherokee Yard comes train 31 for Oklahoma City, led by F3 No. 5013 and EMD/Alco cab units in December 1960. Note the use of both searchlight and semaphore signals. J. David Ingles photo

A station agent with a train order fork holds out train orders for a Frisco freight train. This was part of timetable and train order operation common on North American railroads throughout the early- and mid-20th century. Mike Condren photo

At its heart, the Frisco was a regional Class I railroad, an X-shaped system with lines from St. Louis through Oklahoma to Texas, including the Quanah, Acme & Pacific, the west Texas tail of the core system, and from Kansas City, Mo., to Birmingham, Ala., and Pensacola, Fla. In 1966, the Burlington Route purchased a sizable block of Frisco stock. For about a decade, there was no further substantive news of a Frisco merger, but in 1977 successor Burlington Northern and Frisco began discussions which led to merger on Nov. 21, 1980.

Frisco’s main line southwest from St. Louis started climbing right at the yard limits, crossing a watershed into the valley of the Meramec River. Down through the Ozarks it followed the top of a ridge much of the way, but it was hill-and-dale running. The Kansas City-Memphis route similarly sliced through the mountains. The outer reaches of the system across the plains of Oklahoma and Texas were easier going.

Remembering the Frisco, at Trains.com!