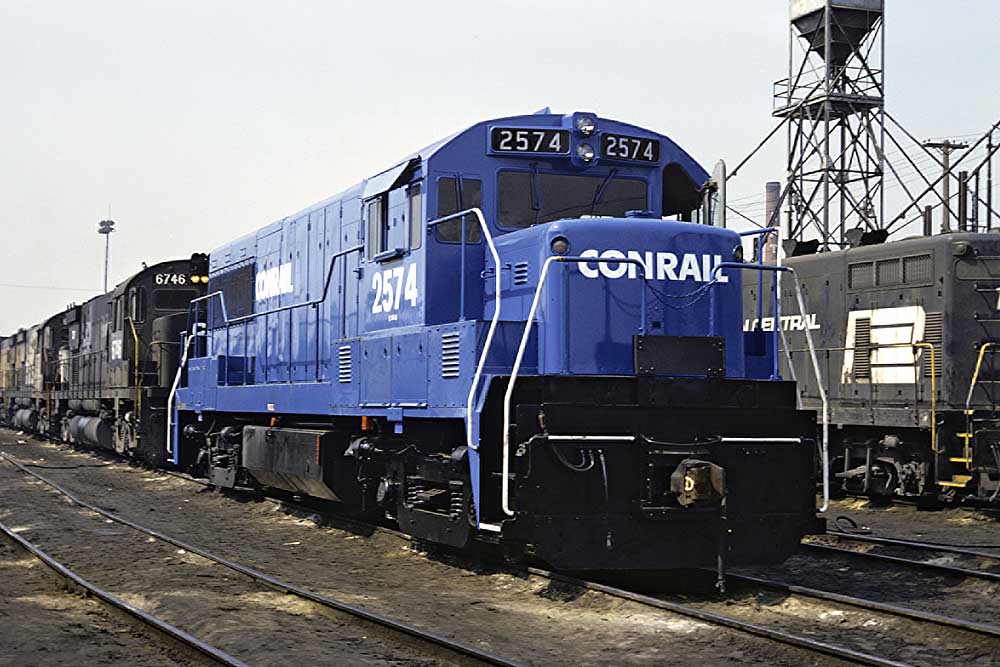 Aging diesels inherited from bankrupt railroads, such as this ex-Reading U30C assisting a freight at Duncannon, Pa., in July 1977, provided for colorful consists in Conrail’s early years. Paul Carpenito photograph

New Conrail SD50s await assignment at Boston in 1984. The SD50 used a frame 28 inches longer than the SD40-2, the better to contain the upgraded 16-cylinder 645F engine and electrical components. This eliminated the “porches” of the SD40-2. The SD50 has a larger radiator than its predecessor, and the dynamic brake grilles are relocated behind the cab, just in front of the air intake. The SD50 has six door panels with four latched doors below the radiator. John C. Benson photograph

Conrail was formed in 1976 with the consolidation of several bankrupt Northeastern railroads: Penn Central, Central of New Jersey, Erie Lackawanna, Lehigh & Hudson River, Lehigh Valley, Reading, and Pennsylvania-Reading Seashore Lines. This resulted in an eclectic mix of motive power, including switchers and F units dating back to the 1940s. About 80% of the original roster came from PC. Over the next 20 years, the roster became more streamlined, with older power retired and new diesels joining the roster. In 1998, Conrail was acquired jointly by CSX and Norfolk Southern, which divided Conrail’s locomotives.