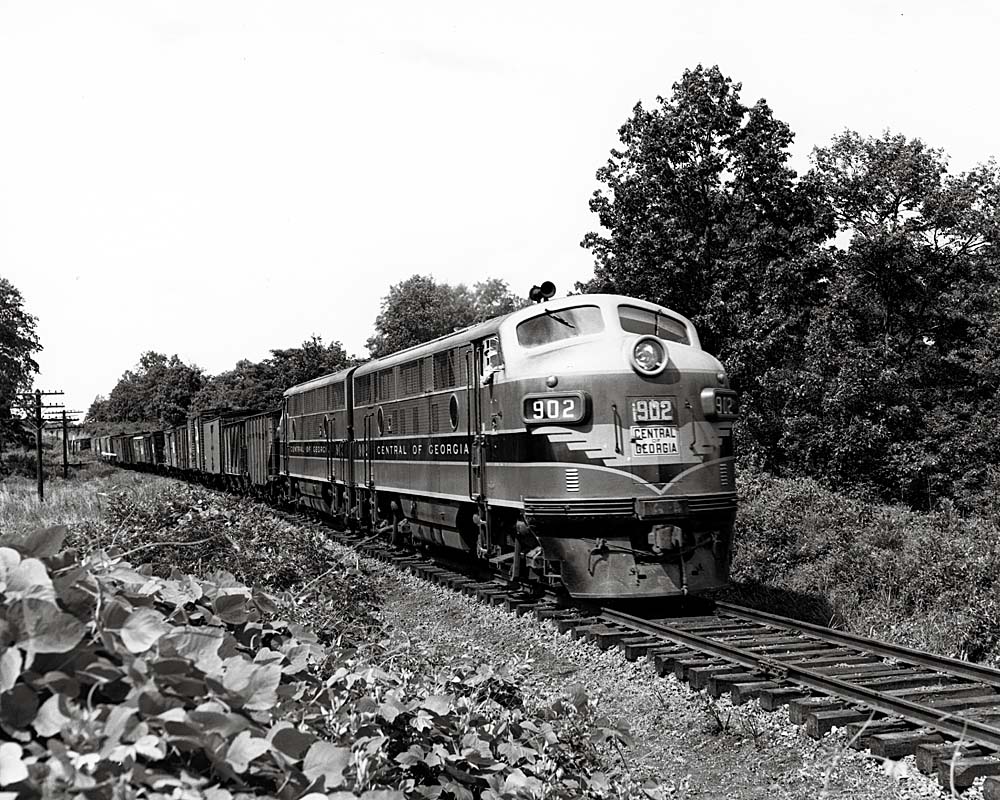 The builders of the Central of Georgia Railway’s earliest predecessor lines, beginning in my hometown of Savannah, could not have imagined that their railroad would eventually extend across Georgia into Alabama, barely into Tennessee, and, briefly, just inside Florida. But they persisted in assembling smaller roads into “A Hand Full of Strong Lines,” a slogan used on early public timetables depicted by an outstretched hand, with prominent cities in the palm and fingers, and Savannah at the wrist.

The city’s location on the Savannah River about 20 miles from the Atlantic Ocean had provided it with a prosperous port since 1733. The river, navigable as far north as Augusta, Ga., was used for freight, mostly cotton, to travel to the Port of Savannah for shipment abroad.

A century later, in 1833, construction of the South Carolina Canal & Railroad Co. between Hamburg, S.C. (across the Savannah River from Augusta), and Charleston, S.C., caused concern among Savannah’s leaders. Worried that the new railroad would divert traffic, they sought to build their own. On Dec. 20, 1833, the Central Rail Road & Canal Co. of Georgia was chartered to build a railroad or canal from Savannah west to the Ocmulgee River at Macon, and the first rails were laid at Savannah in December 1835 amid great fanfare. Just as construction began, the charter was amended to allow banking privileges, and the company’s name was changed to the Central Rail Road & Banking Co. of Georgia.

The specific route to Macon caused disagreement, with some wanting a more direct “southern” route, and others preferring a less direct “northern” route, which was better from an engineering standpoint. Management eventually chose the latter, in part owing to plantations in the region from which slave labor could be obtained for construction, and from which shipments of cotton would be made. The selection of this route likely was the inspiration for the railroad’s later slogan, “The Right Way.”

The company had financial problems and labor issues, but construction continued, reaching the east bank of the Ocmulgee, across from Macon and 190 miles from Savannah, in October 1843. At that time, the Central Rail Road was thought to be the longest railroad in the world under single ownership.

Near the end of the War Between the States, the main stem of the Central between Macon and Savannah received significant damage from Gen. William T. Sherman’s troops on their March to the Sea.

The wartime blockade on Savannah had stopped all port activities and limited further development. That changed in 1872 when Central Rail Road President William M. Wadley purchased the Vale Royal Plantation, 273 acres of riverfront property on the Savannah River just north of the city, where docks, warehouses, railroad yards, and industries were built. Two years later, the Ocean Steamship Co. was formed as a Central Rail Road subsidiary. Its initial fleet of six ships allowed the railroad to reduce dependency on private ship owners to get products to northern ports.

With the “hand full of strong lines” stretching across central Georgia, management turned attention to Alabama, purchasing a line to Montgomery in 1879. Birmingham was reached in 1888 via the Columbus & Western, which had two tunnels just east of Birmingham. One of those, Oak Mountain Tunnel, is thought by some to be the site of John Henry’s legendary competition with a steam drill.

During and shortly after the reorganization, several smaller railroads, some of which had been subsidiaries, were absorbed into the “new” CofG, including the Chattanooga, Rome & Southern, which extended the system to its northernmost point at Chattanooga, Tenn. CR&S built south to Carrollton, Ga., and the Savannah, Griffin & North Alabama built from Griffin north to Carrollton, resulting in a 200-mile branch off the CofG’s Atlanta-Macon main line.

The Central barely reached not only into Tennessee but also Florida. Its line from Columbia, Ala., west to Dothan was built by the Chattahoochee & Gulf, and a branch extended the route to Lockhart, Ala., next to the Florida border, in 1904. Soon 2-mile spurs from Lockhart reached to Paxton and Lakewood Fla., but they were gone before World War II. CofG’s zenith in mileage is believed to be 1,944, around 1930.

In east-central Georgia, CofG controlled several railroads which were often referred to as the “Central Short Lines”: Wrightsville & Tennille, Wadley Southern, Louisville & Wadley, and Sylvania Central. They often shared equipment, much of it hand-me-downs from the CofG, and the “down home” operations with aging steam locomotives and wooden combines on mixed trains, often run daily except Sunday, became popular with railfans.

IC acquired Central of Georgia Railway’s control in 1909 through purchase of stock from E. H. Harriman, although the Central was operated as a separate company with its own facilities, operations, and administrative offices. IC opened a route from Jackson, Tenn., to Birmingham via trackage rights and new construction, to connect with the CofG. It was during IC’s ownership that several Midwest-to-Florida passenger trains, including the Seminole, began operating over CofG.

Central of Georgia entered receivership in 1932, which continued until 1948 when it was reorganized, no longer controlled by the IC.

The Savannah & Atlanta Railway, which ran from Savannah northwest to a connection with the Georgia Road at Camak, Ga., was purchased in 1951 [“Fallen Flags Remembered,“ Winter 2012 CLASSIC TRAINS]. CofG operated S&A as a separate company, though they consolidated 70 miles of nearly parallel mainline trackage out of Savannah (about half each CofG and S&A) in 1962.

In the mid-1950s, the St. Louis-San Francisco Railway (Frisco) began buying CofG stock, soon acquiring a majority ownership, but without ICC approval. Ultimately, the ICC ruled against Frisco and ordered it to sell its CofG stock. Southern Railway acquired that stock and exercised control on June 17, 1963.

Cotton, fruit, and coal on the Central of Georgia

Central of Georgia Railway enjoyed a variety of freight traffic, much of it agricultural owing to the moderate climate and favorable growing conditions. Cotton, the original commodity, was shipped from middle and south Georgia to Savannah and loaded onto ships bound for northern mills. Orchards around Fort Valley were served by seasonal sidings, with blocks of Fruit Growers Express refrigerator cars taking peaches to northern cities. Other fruits and vegetables not requiring refrigerated transport were shipped in Central’s vast fleet of ventilated boxcars.

The availability of timber resources, mainly southern yellow pine, contributed to the growth of the paper industry in the Southeast. On-line mills at Savannah, Macon, Rome, Coosa Pines (40 miles east of Birmingham), and near Augusta, received pulpwood racks and wood-chip cars from area woodyards, with finished paper products shipped out in boxcars. Coal was mined near Birmingham and Chickamauga, with much of it used by CofG for locomotive fuel or sent to Savannah as fuel for steamships.

Central of Georgia was basically an east-west road, with the predominant route being between Birmingham and Savannah via Columbus and Macon, 440 miles. Most CofG freight traffic was to or from Savannah. Operationally, traffic heading away from Savannah was considered westbound, with odd-numbered trains, while traffic moving toward Savannah was considered eastbound, with even-numbered trains.

Probably Central of Georgia’s best-remembered freight cars were the 50-foot PS-1 boxcars that were black with a large aluminum oval — called a “blimp” on the stencil drawings, often a “football” by train-watchers — on each side. The Central had two groups of these cars, built in 1954 and 1956.

Southern Railway control in 1963 resulted in many immediate changes, as CofG offices and operations in shared terminals were closed or consolidated with Southern facilities. CofG’s three operating divisions — Savannah, Macon, and Columbus — remained autonomous (although the Savannah Division was consolidated with the Macon in 1964) until September 1967, when they were absorbed into Southern’s Atlanta, Macon and Birmingham-Mobile divisions.

Today, Central of Georgia Railway’s main route, from Savannah to Macon to Columbus to Birmingham, remains important to Norfolk Southern. Other lines remain — Millen to Augusta, Macon to Atlanta, and Macon to Albany — but most of the other portions of the independent CofG are either run by short lines or have been abandoned. CofG’s riverfront property in Savannah, sold to the State of Georgia in 1958, now is the Ocean Terminal of the Georgia Ports Authority.

The regional system that touted itself as “The Right Way” and grew to almost 2,000 route-miles at its peak, now has been a “Fallen Flag” for half a century.

One thought on “Central of Georgia Railway history remembered”