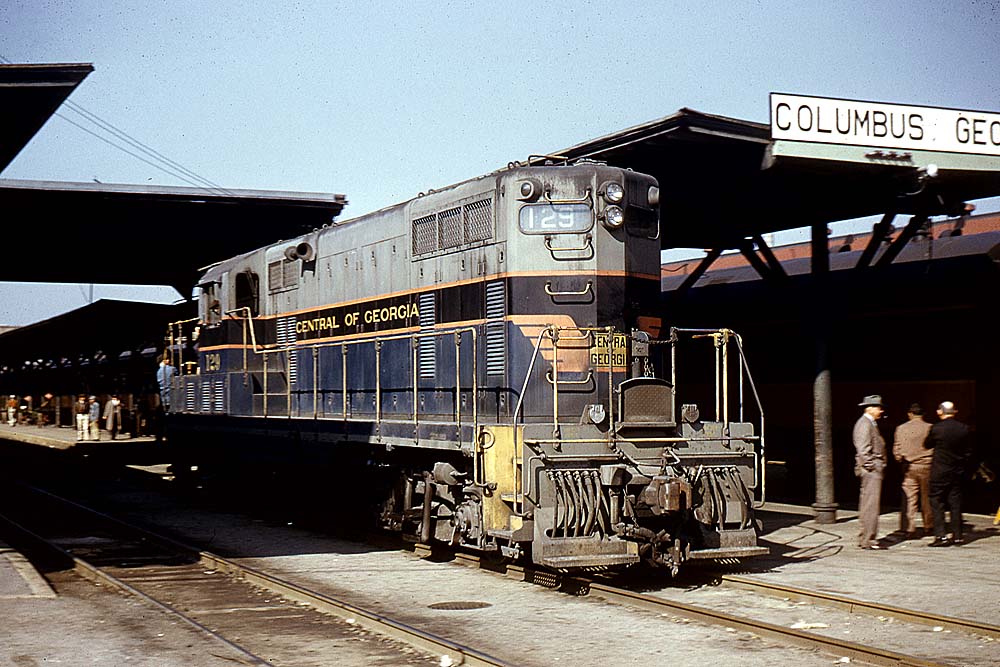 Central of Georgia locomotives bought a great deal of variety to the South.

The Central’s only modern steam engines were eight Lima 4-8-4s, Nos. 451-458, received in 1943 and used in both passenger and fast freight service. Designated the K class, they were nicknamed “Big Apples,” but would have only a 10-year life, as all were retired in July 1953.

Dieselization began in 1939 with the arrival of SW1 No. 1, which was joined by about 40 more switchers from EMD, Alco, Baldwin, and Fairbanks-Morse.

Diesels for mainline use began arriving in 1946 when eight E7As replaced steam on through passenger trains. In 1947, two intra-line streamliners were added, Nancy Hanks II between Savannah and Atlanta, and the Man O’ War between Columbus and Atlanta. To help with these, two more E7As came in 1948, along with two E8As in 1950, Nos. 811 and 812, which were used in pool service with Illinois Central on the Seminole. The E8s, like the E7s, came in CofG’s distinctive blue, gray, and black scheme with orange trim, but later were painted in IC’s brown-and-orange, although they kept Central of Georgia lettering. In later years they could be found on virtually any IC train, being spotted as far from the Seminole route as St. Louis, Mo., and Sioux City, Iowa!

Central’s first diesel road freight units were nine EMD F3As in 1947-48, followed in 1949 by five FM H15-44 road-switchers. The latter were not successful in road service and were soon assigned to branchline duty. Beginning in 1950, CofG filled its roster of road-switchers with 15 GP7s, 39 Alco RS3s, 11 GP9s, and 8 GP18s, plus a single SD7 and 6 SD9s. Four each of the GP7s and RS3s were equipped with steam generators for passenger service.

Most of the early road diesels were painted in the blue, gray, and black, a scheme that would continue until 1959 when locomotives began receiving a simplified Pullman green scheme, referred to by some fans as “collard” green, with yellow striping. The GP18s were the only locomotives delivered in green. Early switchers were black with white lettering and the red rectangle on the cab.

After the Southern takeover in 1963, Central of Georgia locomotives began receiving Southern’s black-and-imitation aluminum “tuxedo” scheme, although with Central of Georgia lettering and keeping their original road numbers. Five new GP35s in December 1963, and then 10 SD35s in 1966, were delivered in this scheme, with the high short hoods preferred by Southern. Beginning in the late ’60s, CENTRAL OF GEORGIA on the flanks was replaced by SOUTHERN with small “CG” initials. CofG’s GP7s and GP9s were renumbered into Southern’s series, but other Central units kept their numbers.

Mountain 490 (Richmond, 1920), one of 32 CofG 4-8-2s, heads out of Macon Terminal Station toward Atlanta on March 5, 1949, with the five-railroad Jacksonville-Chicago Dixie Limited. Central of Georgia Railway Historical Society collection

Central of Georgia 2-8-2 Mikado 1846 (later 646) was built by Lima in 1923. The Harriman influence is evident in the straight boiler and the deep-arched cab roof. Lima photo

Displaying the pre-Southern look of CofG yard diesels is S12 No. 311, one of 10 Baldwins of 4 models, at Columbus, Ga., in November 1960. Norm Herbert, Brian M. Schmidt collection

Dual-service GP7 No. 129 moves around the depot at Columbus, Ga., in April 1960. CofG’s Geeps and SDs were set up for short-hood-forward operation, so this is the rear of the unit. Norm Herbert photo

Georgia Southwestern’s ex-VIA FP9s 6308 and 6302 wear a Central of Georgia-inspired paint scheme at at Dawson, Ga., in the early 2000s. Erik Fedde photo

Central of Georgia-painted GE ES44AC No. 8101 poses for its official portrait upon completion in 2012. Norfolk Southern: Casey Thomason photo

One thought on “Central of Georgia locomotives remembered”