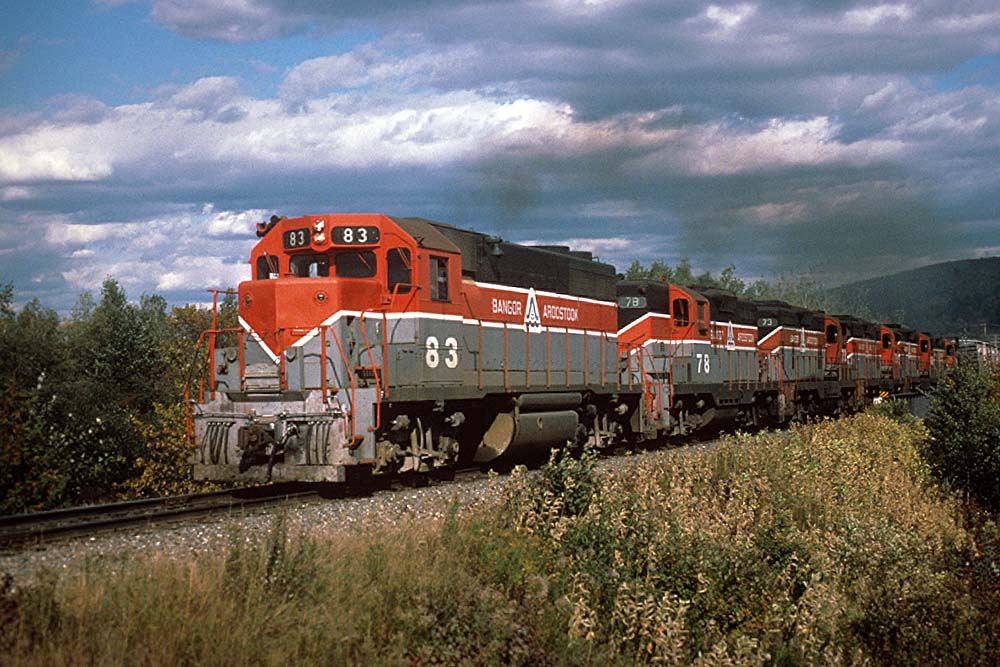 Let’s celebrate the variety and color of Bangor & Aroostook locomotives!

The Bangor & Aroostook didn’t purchase its first diesels (EMD F3s) until 1947, but dieselization then came quickly, with the last steam operations in 1949. The railroad kept its older diesels in good shape for a long time, supplanting them with GP38s in the late 1960s. BAR was purchased by rail holding company Iron Road Railways in 1995.

Blue-and-gray Bangor & Aroostook E7 700 couples to the Aroostook Flyer, due out at 5 p.m. sharp for Van Buren, 230 miles north on the Maine-Quebec border at Bangor Union Station on July 24, 1950. Bruce Owen Nett photo

On March 4, 1955, a northbound extra freight waits at West Seboois (55 miles south of Oakfield), also for a meet with the Aroostook Flyer. Behind the F3-GP7-F3 diesel trio are 103 cars, mostly empties for potato-loading. Allen A. Sharp photo

The blue and off-white of GP7 63 (on exchange to Pennsylvania Railroad in Cleveland in 1961). The. BAR would lease locomotives to other railroads when its traffic was down in the winter. William D. Volkmer photo, J. David Ingles collection

In 1950, BAR wanted to fully dieselize (which it did in 1951, with 42 units replacing 73 steam engines), but each winter when Maine potatoes began to move, it had to fire up stored steamers. So the 600-mile pike solved the problem in a unique way: It ordered 12 GP7s, Nos. 560-571, which EMD delivered that November, but signed a seven-year pact to lease 10 of them, at no profit, to the Pennsylvania Railroad during each May 1 to Nov. 15 period. The deal was extended (and carried on into the ‘70s), as evidenced in this June 1961 scene on Cleveland’s Lake Erie waterfront, where two of the GP7s (BAR got four more in 1952) and three of its five GP9s of 1954 (Nos. 76-80 — all Geeps dropped the “5” in BAR’s 1953 system renumbering) congregate in front of Municipal Stadium. Herbert H. Harwood Jr. photo

Last livery: GP38 83 leads five older Geeps south on train ON-28 at Island Falls in October 1984. The road had 17 GP38s: 81-88 were purchased new and 90-98 were acquired secondhand from Conrail and Missouri Pacific. Ron Johnson photo

Bangor & Aroostook BL2 57, returned to its original number, with an earlier paint scheme and given a name, is spun on the hand-operated turntable at Caribou, Maine, on a June 1980 excursion. J. David Ingles photo

See all our previous celebrations online.