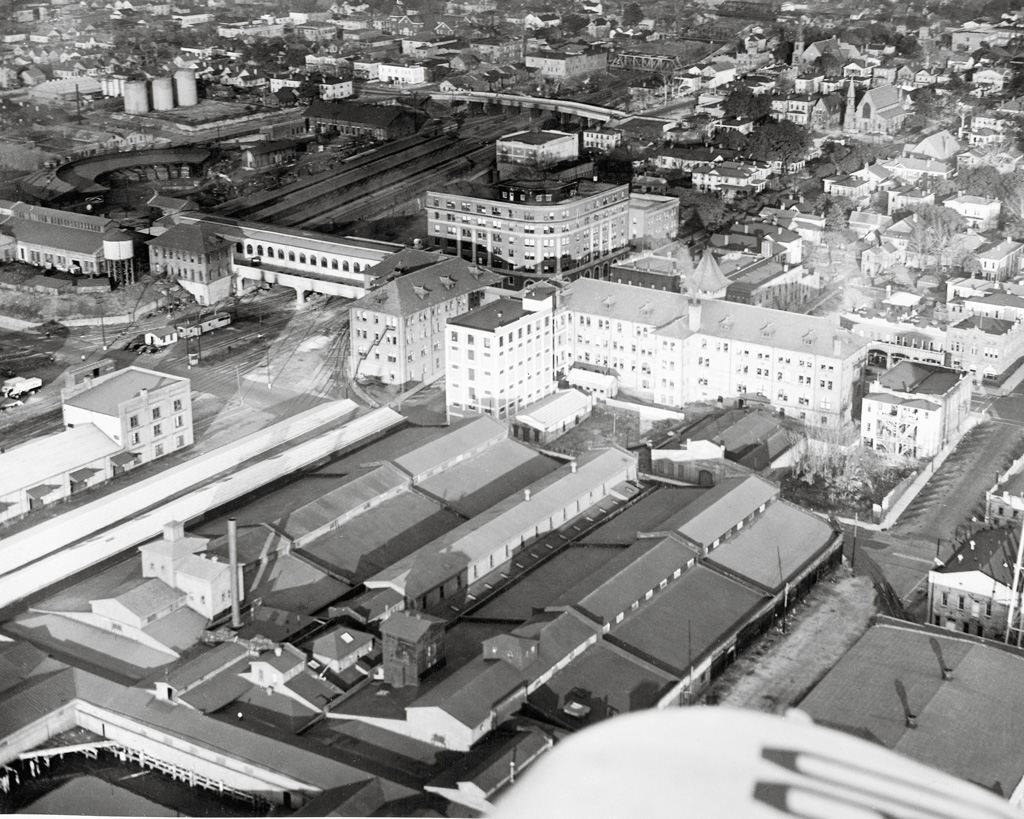 This 1940’s afternoon photo looks northeast from over the Cape Fear River across the north end of downtown Wilmington, N.C. (the ocean is 6 miles to the east). Atlantic Coast Line’s history in the port city dates to 1840, when the Wilmington & Raleigh opened a 161-mile line northwest to Weldon. After the Civil War it and four other roads reaching from Richmond, Va., to Charlestron, S.C., came under control of William T. Walters of Baltimore and became known collectively as “the Atlantic Coast Line.” A firm Walters formed in 1889 to control them formally took on that name in 1893. Wilmington was bypassed during 1885-92 when W&W built the Fayetteville Cutoff linking Wilson, N.C., and Pee Dee, S.C., 62 miles shorter than via Wilmington in the 1880’s and ’90’s, and its headquarters stayed there as the system surpassed 5000 miles. In 1958, ACL and parallel rival Seaboard Air Line revealed a merger study; they petitioned for union in 1960, when ACL left Wilmington and moved into a new headquarters in Jacksonville, Fla. Seaboard and ACL merged in 1967; the last passenger train left Wilmington in ’68. Most of the ACL Wilmington facilities were razed. Left are 1945 office building D, now the city police department; warehouses A (1876) and B (1900; to the left of A), part of the Coastline Convention Center; and A’s freight office, now the Wilmington Railroad Museum, which displays ACL 4-6-0 250.

One thought on “Three depots of the South”