Home / Railroad Stories: The Way It Was / The “middle” order

A failure to communicate on the old Norfolk Southern 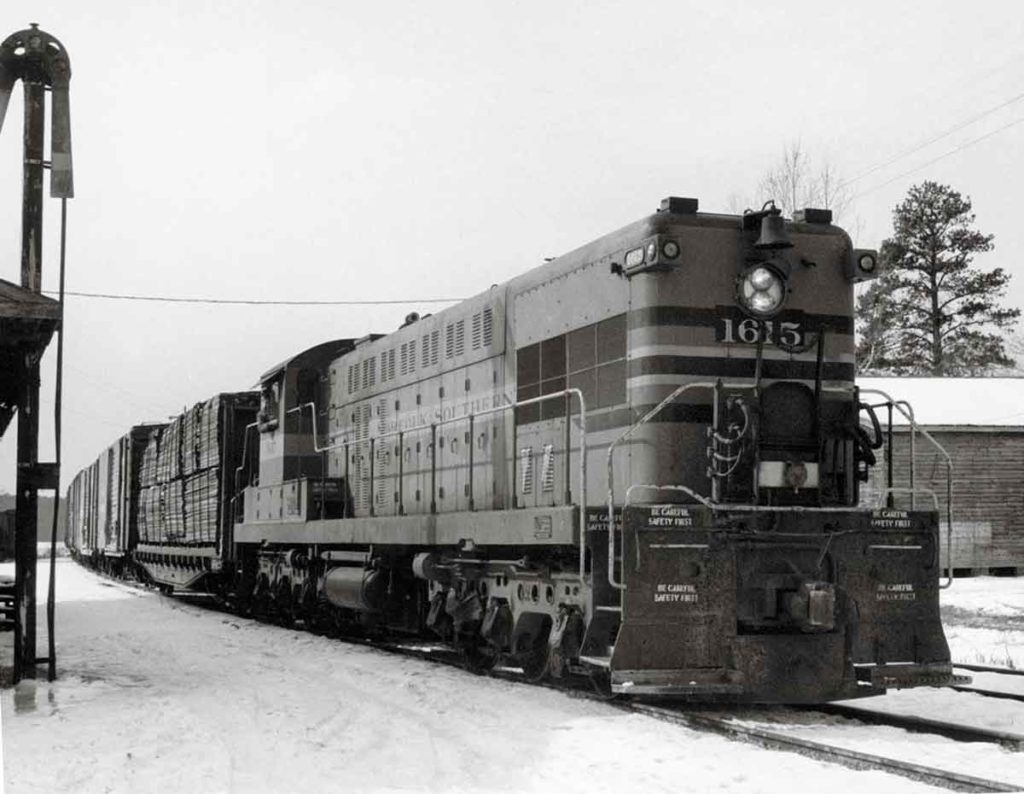 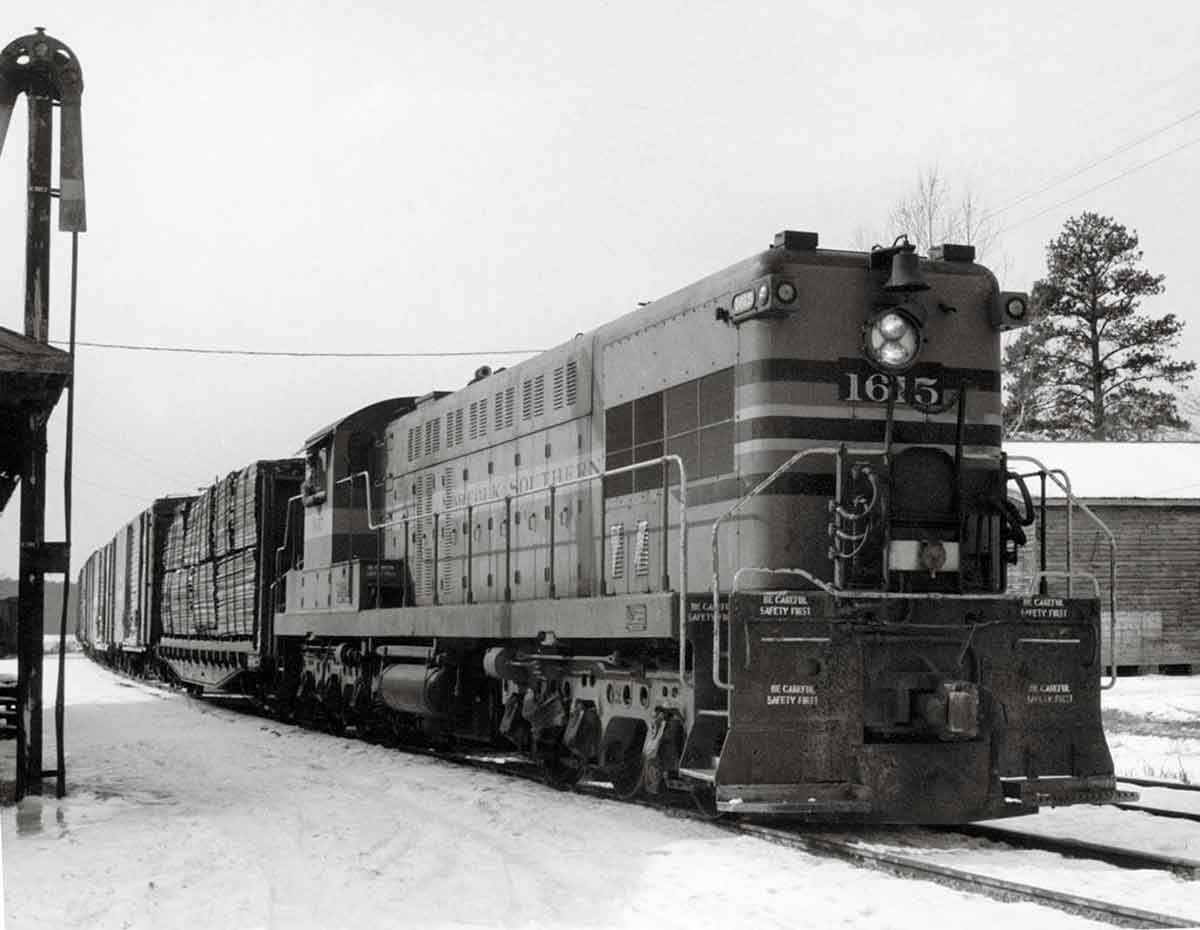 Baldwin road-switcher 1615 passes the Hertford, N.C., depot with Norfolk Southern freight 88 in January 1965. A few months later, removal of a siding here would cause some confusion.
Harry Bundy
Telegraph operators working from the extra list rolled with the punches. They were on call 24/7, as they say now, to fill vacancies created by emergencies, vacations, and “tag” nights — the one shift occurring each week at continuously staffed stations that could not be covered by the four regularly assigned operators.

In May 1965, the chief dispatcher of the old Norfolk Southern Railway notified me to protect the agent-operator position at Hertford, N.C. Agency work wasn’t my forte. There were cars-on-hand reports, demurrage reports, blind siding reports . . . and more. Certainly the agent contributed to the profitability of the railroad, but I much preferred operator-leverman and operator-clerk assignments. These jobs had an immediate and discernible impact on the day-to-day operations. Watching Charlotte-bound freight No. 99 pass the yard office at Carolina (Norfolk) was a fringe benefit that did not translate to the paycheck stub. You’d typed the consist, calculated the tonnage, copied a “meet” order, and cleared the train with the proper orders. There was satisfaction in knowing you’d played a part in getting the train out of its initial terminal.

On the Monday in question, section foreman Harris had unlocked the Hertford depot before I arrived. After copying a line-up for motor cars, he advised me that his force was in Hertford to remove the 70-car passing siding. Anderson siding had been removed in the late 1940s. With the passing track at Hertford gone, there’d be no siding on which to meet trains for the 24 miles between Elizabeth City and Edenton.

No. 87 did local switching from Fentress, Va. (9 miles south of Carolina Yard), to Mackeys, N.C. (at the south end of the Albermarle Sound trestle), including at Hertford. There was one proviso — suspend switching in sufficient time to set out cars at Plymouth and go on to the final terminal, Marsden, prior to the crew’s expiring on the Hours of Service Law, which then was 16 hours. That Monday, the accumulation of weekend traffic had consumed 87’s available switching time before it left Elizabeth City (“E-City,” as we called it). So 87 passed Hertford without setting off the car of company material billed there; the car would be cycled back up to Norfolk and included in 87’s train on Wednesday.

On Tuesday, there were several cartons from the local shirt factory and an air conditioner to be sent out by Railway Express. Because the assigned agent-operator would complete REA’s complicated monthly report, it was mutually agreed that he’d be entitled to the 10 percent commission that the billing station received.

On Wednesday my assignment finally took a tack toward conducting transportation. Mackeys had OS’ed No. 64, and the train was crossing Albermarle Sound at the regulation 7 mph. No. 87 was about to complete work at E-City. The buzzer on the dispatcher’s phone sounded, and the crusty old Frenchman working the dispatcher’s job at Raleigh commanded, “Edenton, three on a 31. E-City, three on a 19. Hertford, three on a 19.” By the sequence the operators were addressed, I knew I was to copy a “middle” order. This was a copy of the “meet” order addressed to the operator at the meeting point to be delivered to the first arriving train as a reminder not to proceed against the opposing movement.

How could this be? Mr. Harris’s gang was removing the siding. Was the dispatcher having a “senior moment”? He’d been dispatching for 40-plus years. Before copying began, I thought it best to confirm his intent, rather than complete the transmission and then have to annul the order.

“Mr. LaFrage, are you going to give me a ‘middle’ order?”

And to that I responded, “Mr. LaFrage, you can’t meet ’em here.”

“What do you mean I can’t meet ’em there? I’m the dispatcher!”

Now Mr. LaFrage was faced with a conundrum — if he held 64 at Edenton to meet 87, Carolina Yard would be hard-pressed to classify and deliver cars to the connections by midnight. Stick 87 at E-City and there’d be a risk of the crew “hogging” on hours before making its final terminal. He resolved the matter by holding 64 at Edenton. To expedite 87 to the meeting point, local switching at Hertford was curtailed and the carload of company material passed its intended destination one more time.

2 thoughts on “The “middle” order”