Home / Railroad Stories: The Way It Was / Smoldering embers of a different age

Remembering a 1967 ride on the New Haven's Owl 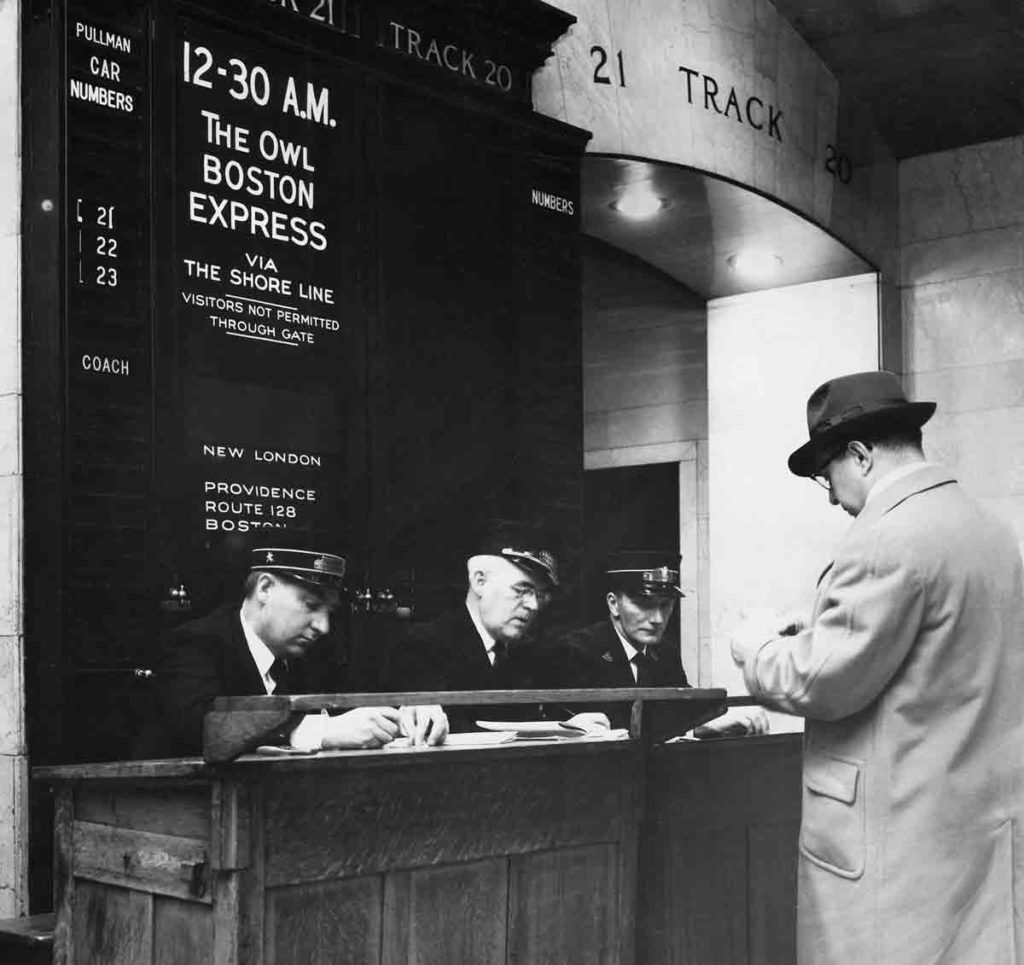 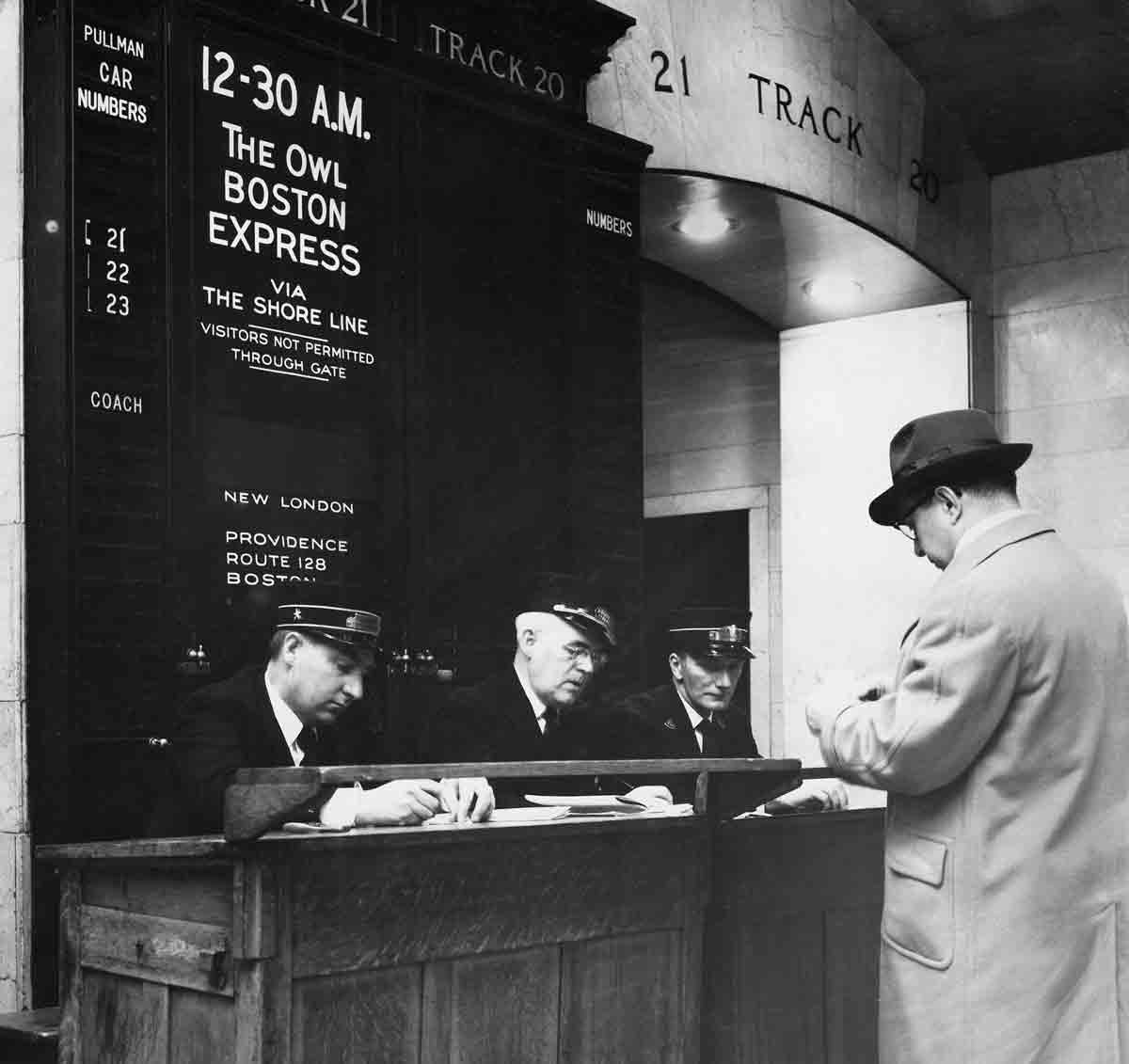 A passenger for the New Haven’s Owl checks in at the gate for track 21 in Grand Central Terminal. This photo, from March 1957 Trains magazine, was author Gwyer’s introduction to the train.
Don Wood
I was first introduced to the New Haven Railroad’s Owl by a photo in the March 1957 issue of Trains magazine. The picture, made by the late Don Wood, shows a Grand Central Terminal trainboard at the gate heralding the departure of NH train 2, the Owl. In that era, the Owl was the premier all-Pullman overnight train between New York and Boston. (It was not the only New York–Boston overnighter, as NH also ran the Narragansett, a mail-coach-sleeper train that respectfully departed GCT 15 minutes after the Owl.)

In 1967 I was in New York Central’s management-training program under the supervision of R. D. Timpany. This was the dawn of the computer era in the railroad industry, a direction firmly embraced by the NYC (President Alfred E. Perlman even created a Vice President of Cybernetics position before 99 percent of the world and 99.9 percent of the New York Central even knew what the term meant), and we were installing a computer-based payroll system for the Maintenance of Way, Mechanical, and Signal departments. We trainees were drafted to help educate supervisors on how the new system worked, and this meant travel from headquarters in New York City all over the railroad. One of my assignments was Boston.

At the time, public travel options between New York and Boston included flying, a bus, or the New Haven Railroad either via Springfield, Mass. — the long way around — or the main line through New London, Connecticut, and Providence, Rhode Island. I chose the latter option, although I’m sure my boss would have preferred otherwise, as passenger trains were a dirty word on the NYC. Nevertheless, I booked passage on the Owl.

The railroads had recently instituted something called the Home Road Pass Plan in a move to get rid of the pass department and its associated paperwork. Under that system, all one did was show his pass to the foreign-road ticket agent and you got half fare. As I recall, the New Haven was a signatory to the pact. So, on the appointed evening, I presented myself, pass in hand, to a ticket agent at Grand Central and paid for a lower berth to Boston. The fare came to $20.78 (in a coach it was $15.39).

In the heyday of the 20th Century Limited and trans-Atlantic liners, it was chic to have dinner in Manhattan, drinks at the Oyster Bar in Grand Central, and proceed to your accommodations. But by 1967 the Century as well as the greyhounds of the sea were on their way to Valhalla. All was not lost, however, as the Oyster Bar and the Owl remained — smoldering embers of a different age. Not wishing to offend the gods of the high iron, I headed for the Oyster Bar to celebrate my impending New Haven adventure — after all, it was a road that I had never ridden, and the NYC was footing the bill. About 11 p.m. I walked to the gate, which still announced the Owl in the grand manner, just as in the Trains photo. The sleepers were open at 10 p.m. and the train left at 12:40 a.m. Arrival at Boston’s South Station was at 6:50 a.m., but you could stay aboard until 8.

My section accommodation, itself an anachronism in 1967, was in a 6-section/4-double-bedroom/6-roomette car, one of an order of 11 Beach-series sleepers built by Pullman-Standard in 1955. By this late date, the Owl carried coaches in addition to sleeping cars. However, the New Haven was still part of the Pullman Company empire, unlike the NYC and Pennsylvania, which had taken over operation of their own sleepers. As I recall, that night’s Owl had two sleepers, two coaches, and a couple of head-end cars. I was ushered into my clean lower berth, complete with crisp white linen sheets, and was sound asleep before departure.

I woke up once during the night (I have no idea where), and it seemed we were gliding on air. Despite the fact that the New Haven was in rough seas financially, the track was impeccable — far better than anything on NYC’s Water Level Route. My friend Henry Frick, a BNSF train dispatcher with whom I worked toward the end of my career, was from New Haven territory. He knew the road well, and says I was not dreaming about the ride, but whether it was the quality of the track or the quality of the car is probably an open question. In any event, it was the smoothest ride I have ever experienced except for a Mitropa sleeper years later on a Berlin–Paris train.

Arrival at South Station was to the minute, and in plenty of time to attend my instructional duties. I returned to New York the next afternoon on another New Haven legend: the Merchants Limited, in a parlor-car seat, no less. The ride was just as smooth, validating my impressions from the night before.

My employer merged with the Pennsylvania Railroad in February 1968. As a condition of the merger, Penn Central was forced to absorb the New Haven, which it did in January 1969. The Owl came off the following month. One could still book a sleeper between New York and Boston, but the car was handled both ways by PC’s Federal, a through train to/from Washington that operated via Penn Station.

Henry had his Owl memories too. He rode the train in September 1968 from Grand Central to Boston in a bedroom, also in a Beach car. He told me he saw the Owl the last week it operated: just one FL9 locomotive and three forlorn cars.

Amtrak never reinstated overnight New York-Boston service as such. It did run a Boston-Washington sleeper on a train called the Night Owl, which appeared in the November 1972 timetable and was more a reincarnation of the Federal, not the Owl. Indeed, its Gotham times were not conducive to the overnight New York-Boston market, as it left Penn Station in the wee hours in both directions. I had occasion to ride it several times while in the employ of Amtrak, but the ambience and romance of the old New Haven was missing. It just was not the same.

8 thoughts on “Smoldering embers of a different age”