Home / Railroad Stories: The Way It Was / Serving the president of the Katy

Riding a business car revealed how a railroad really functions 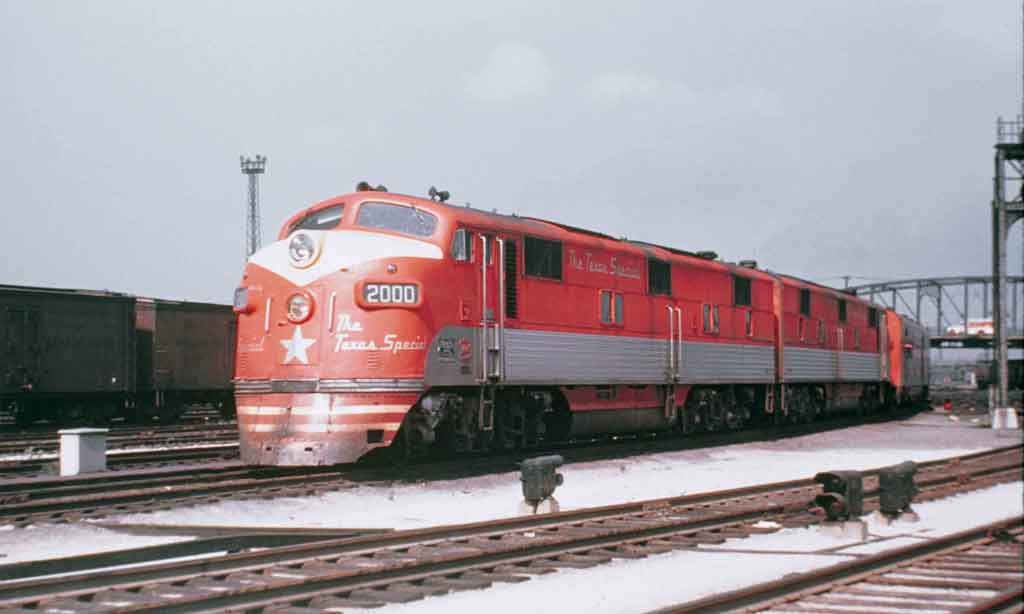 The Katy-Frisco Texas Special, a favorite conveyance for the Katy president’s business car, arrives in St. Louis in 1956.
Fred Scott
My railroad-related career started in 1941, when I was hired as a stenographer by the South-Western Freight Bureau in St. Louis. It was readily accepted for a young man who had studied shorthand and typing in high school to get a job with a railroad office using those skills. The Bureau published freight tariffs for an association of railroads whose headquarters were in St. Louis or in southwestern U.S. cities.


Then World War II came along, and in May 1942, I enlisted in the U.S. Coast Guard as a yeoman, serving the next four years in domestic locations and winding up in the Philippines before being discharged in 1946. On returning to the Bureau, I worked as a reporter at freight tariff meetings and eventually as secretary to the chairman of the Bureau.

In spring 1949 I heard there was an opening in the executive department of the Missouri-Kansas-Texas Railroad, the “Katy,” which was headquartered in St. Louis, so I applied and was hired as secretary to the president. He was Donald V. Fraser, a true gentleman. Needless to say, I was overjoyed, not the least because my salary jumped from $200 to $385 per month.

Along with the usual office duties, my job entailed traveling with the boss, mostly aboard his business car, the 401. This was the part of the job I liked most, because it gave me a chance to see the actual workings of the railroad, as well as the various cities and towns that our railroad served.

The Katy and the St. Louis-San Francisco, the “Frisco,” jointly operated a streamlined passenger train, the Texas Special, between St. Louis and San Antonio, Texas. Southbound, the Special traveled on the Frisco from St. Louis to the northeastern Oklahoma town of Vinita, where it easily moved through a connection track onto the Katy.

On the not infrequent occasions when Mr. Fraser would tell me we would be going to Dallas in a few days, it was my job to arrange for the 401 to be connected to the rear of the Texas Special. The Special left St. Louis Union Station at 5:30 p.m. and arrived in Dallas about 7:30 the next morning. If the boss wished to take a more leisurely trip, the 401 would be attached to train 5, the Katy Flyer, which used the Katy all the way, leaving St. Louis at 11:30 p.m. and arriving in Dallas at 10:05 the next evening.

The 401 was a very comfortable car, consisting of a galley (kitchen), crew’s quarters (staffed by a chef and a porter), a dining room, four bedrooms, two showers, and an observation lounge at the rear, which had an open platform. One of the bedrooms also served as the secretary’s office. We had an excellent chef, Eddie Robinson, whose fried chicken and sirloin strip steaks couldn’t be beat.

Supplying the 401 was quite a process. Toussaint Washington, our porter (today, the term is car attendant), and Eddie, our chef, took care of this. The meat products came from Will Docter Meat Co. and the grocery items from Straub’s Market, both St. Louis establishments. It was my job to approve all the bills for these things, so periodically I would accompany the crew on their shopping trips.

When we rode the Katy Flyer, each superintendent would board the train at the beginning of his district and ride with us to the end of his territory. Their job was to bring Mr. Fraser up-to-date on matters such as the number of cars of wheat shipped for the month, new businesses started up on their district, and so forth.

My favorite superintendent was Charlie Birge, who was in charge of the North Texas District headquartered at Denison, Texas. Charlie always had a story to tell, an example of which would be, “I was talkin’ to an old boy up at Wichita Falls the other day, and he said it was so hot up there last week that he saw a dog chasin’ a jackrabbit and they were both walkin’.”

The superintendents would vie with each other to see who could tell Mr. Fraser the best news. Of course, exaggeration was part of the routine, which didn’t fool the boss for a minute. Another Charlie Birge story concerns watermelons. Sometimes during summer when we were riding the 401 in Charlie’s territory, the boss would wink at me and say, “Charlie, do they still grow those big watermelons down here?” Charlie would reply, “Oh, yes sir, Mr. Fraser, they sure do!” Upon which, at the next station stop, a big watermelon would be put aboard the 401 for Mr. Fraser . . . and of course, “nobody knew where it came from.”

I worked for the Katy from 1949 to 1958, and I always felt I was part of the railroad family because I was treated so well. In 1958, however, there was a change in management, and 60 percent of the employees were laid off, including me. The Katy struggled financially and eventually in the late 1980’s was merged into Union Pacific.

Today, the route of the Katy Flyer in Missouri is the “Katy Trail,” from St. Charles to Sedalia, and it is a favorite biking route of my son, Patrick. Although the Katy no longer exists, I still have fond memories of the “good old days.” They were great while they lasted!

5 thoughts on “Serving the president of the Katy”