Home / Railroad Stories: The Way It Was / Railfan Stories / The mums

Decades after they perished, three SP railroaders were not forgotten 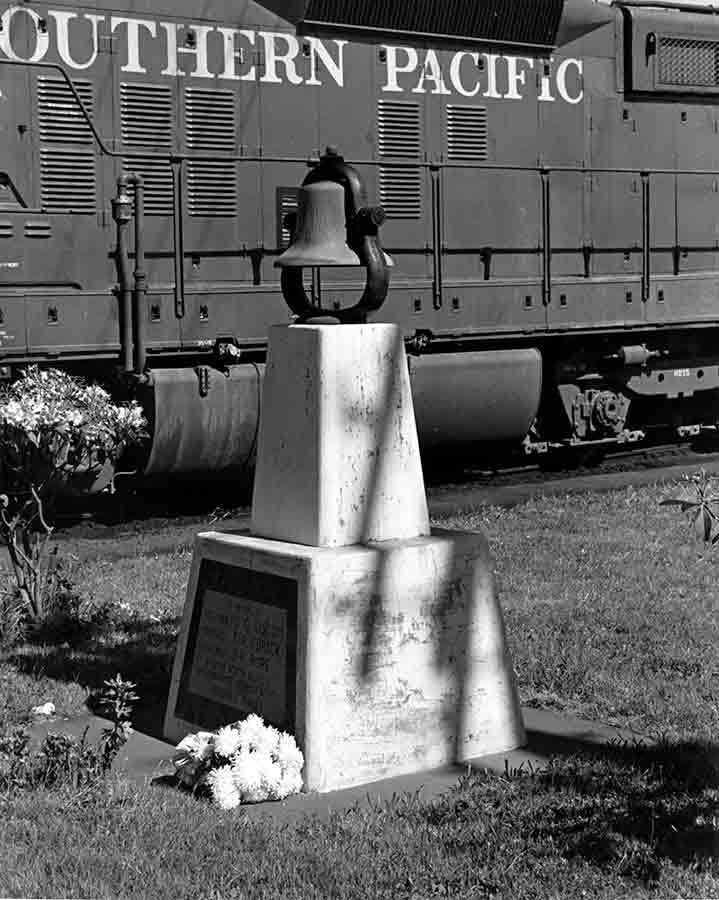 A railfan went to Eureka, Calif., to see SD9s, but it’s the flowers at a memorial that made an impression.
David Lustig photo
It was the lure of the machinery that first attracted me to trains. But technology is nothing without people to operate it, and I suppose it’s a side effect of the aging process, but now it is the very human side of this business that leaves the biggest impact on me.

On a pleasant June day years ago, while chasing trains on the Northwestern Pacific, I came across a small monument in its Eureka (Calif.) yard. Here was a tribute to three men — engineer, fireman, and brakeman — who lost their lives decades before in a railroad accident. Atop the two-tiered concrete obelisk sat a steam locomotive bell, signifying to even the most naive of bystanders the profession of the fallen. I looked at it for a moment and then went about my business snapping the portraits of the various Southern Pacific SD9s that were then the trademark of the NWP.

(Later, I researched the incident the monument commemorated. The men were D. G. Liscom, engineer; T. R. Porter, fireman; and H. J. Aure, brakeman. They died on January 17, 1953, when a landslide swept their locomotive, NWP Ten-Wheeler 112, into the Eel River at Scotia Bluff. Their bodies were recovered, and the monument was dedicated later in 1953. Engine 112 was salvaged, but never ran again; it’s now displayed at the California State Railroad Museum. The monument has been relocated to the Fortuna NWP depot museum.)

On my way out of the yard, pleased with my well-lit catch of first-generation diesels that never seemed to migrate down to my home area in Los Angeles, I turned to take a last look at the monument. There was something different from when I first spied it: the flowers.

Sometime in the 20-minute span I was blissfully recording the nuts and bolts of railroading, someone, perhaps a friend or relative of the fallen, had laid a bouquet of mums at the base of the monument. These men were not forgotten.

And I have not forgotten them, either. Whenever I get too caught up in welded rail, turbochargers, and onboard computers, I think about those mums. It’s one of the very few railroad photos that I’ve never had to rummage through my notes to remember when and where I took it.

2 thoughts on “The mums”