Home / Railroad Stories: The Way It Was / Railfan Stories / Roselle to Jersey City: A farewell

With the Aldene Plan upon us, it was time for one last train (and ferry) ride 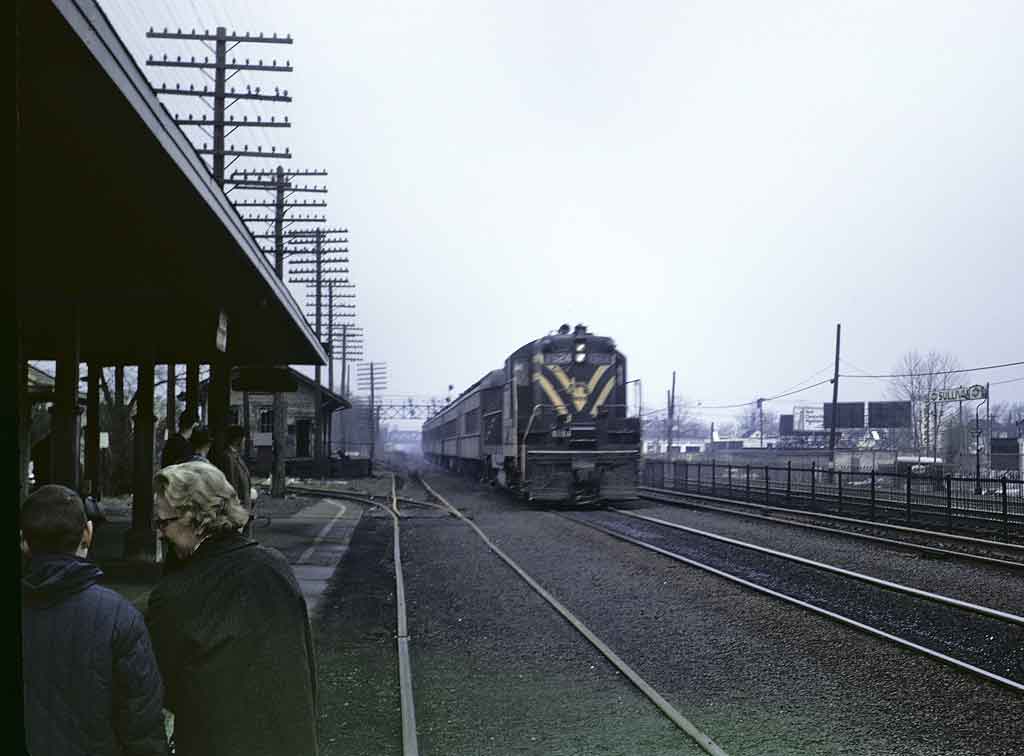 CNJ GP7 1524 brings a Jersey City-bound commuter train into Roselle station on April 27, 1967, not long before the Aldene Plan diverted such trains to Newark’s Penn Station.
John A. Yohannan
A major change was about to take place in 1967 on the Jersey Central passenger service to Jersey City, N.J. From its humble beginnings on January 1, 1839, when it began operations as the Elizabethtown & Somerville, the railroad had grown to a 35-mile stretch of four-track main line from Raritan into Jersey City, carrying as many as 35,000 commuters daily on several dozen trains on their daily trek to their places of employment, mainly in New York City.

The “Aldene Plan” was to take effect on May 1, and the mainline passenger trains that had been going to Jersey City for more than 100 years would no longer pass through Roselle, Elizabeth, Elizabethport, and the stations in Bayonne and at Communipaw en route into Jersey City. Instead, after leaving Cranford eastbound, they would go up a new ramp onto Lehigh Valley track and east to a connection at Hunter Tower with the Pennsylvania main line, which they would use into Newark’s Penn Station. There, riders could take PATH rapid-transit trains to midtown Manhattan or PRR trains into Penn Station, New York City.

On April 27, for nostalgia’s sake, I took one more trip to Jersey City from Roselle, where I lived, and took my 13-year-old son along. We drove the short distance to the Roselle station and waited, along with probably the usual number of other riders, likely on a routine trip into New York City. As the train approached from Cranford, we saw we’d have Jersey Central GP7 1524 as our motive power. The train was well-patronized, but we found seats. We made the usual stops at Broad Street in Elizabeth and Elizabethport, then passed over the huge Newark Bay lift bridge before stopping at Bayonne’s West 8th Street station. We clattered into Jersey City Terminal right on time.

As the 1524 backed the empty train out of the station, we walked the short distance to our ferry, The Tides, to cross the Hudson River one more time. The Tides and her sister, Narrows, both diesel-electric-powered, had plied between 69th Street in Brooklyn and Staten Island until they were put out of business by the Verrazano-Narrows Bridge. They were then leased to the Jersey Central, because CNJ’s only operable ferry, Elizabeth, was steam-boilered and only used in rush-hour service.

The 12-minute ride across the Hudson had always been an enjoyable one for me, and this was no exception, with mild spring breezes blowing across the deck of The Tides. On the New York side, work had been in progress for some time for the new World Trade Center, and except for our ferry slips, all else had been removed from the immediate area, including the old Pennsylvania Railroad slips that had been alongside. Also gone were the piers that once were host to the famous steamship lines that had sailed up Long Island Sound to Providence, R.I., and Boston.

My son and I walked the short distance to the financial district at Wall Street, visited the old Federal Treasury Building where George Washington was sworn in as our first president, and then took a quick trip to the Brooklyn Bridge and back to Cortland Street before riding the ferry back to Jersey City.

Boarding The Tides, we made ourselves known to the pilot, a friendly man who would be out of a job soon. He invited us into the pilot house, but I declined with thanks, not wishing to take his attention from his duties. Our 3:15 p.m. train, a local, left Jersey City Terminal on time. At Roselle, we descended from the train in time to take a photo of the conductor with his hand on the signal cord, as if in tribute to the era that was ending. The local swiftly left the station, and in the short time we lingered, we saw several express trains pass on the inside tracks of the four-track main. We watched the afternoon westbound rush hour in full swing, which kept the four tracks busy with train after train, in both directions. Except for a terse notice posted on the station door, there was no indication that all this would cease forever three days later.

We returned home, having spent a glorious day together. Living not far from the Lorraine grade crossing, we could hear the diesel horns blowing as the trains continued to operate through Roselle, but in a few days all became quiet as the Aldene Plan went into effect. Several days later, we visited the Roselle station and found it quiet, the service-change notice still posted on the door, now locked. The paper advised patrons to go the new Roselle Park station, a mile north.

CNJ operated RDC shuttles into Jersey City for a while, and freight service continued until it was finally discontinued by Conrail. Gradually, the once shiny rails took on a rusty hue, then turned black from disuse as time went by. The well-kept four-track main line became weed-grown, with garbage and old tires strewn on the roadbed, and only one westbound track remained active, for occasional equipment moves from Elizabethport Shops, still in use by New Jersey Transit, out to the main line at Cranford. When NJT completed a new shop in the Jersey meadows, those moves also ended. The low railroad overpass over busy Route 1 in Elizabeth was removed, replaced with a high overpass for the one remaining track. As Conrail needed re-lay rail in other places, it would remove the heavy-duty rail from the station area for use elsewhere.

Today the right of way remains, choked with vegetation and second-growth trees pushing between the rotting ties, but there is serious talk about a light-rail line to connect Cranford with Elizabeth and on to Newark by way of the Newark Airport. Only time will tell if this happens, but I still fondly remember the day my son and I took our final ride into Jersey City.

One thought on “Roselle to Jersey City: A farewell”