Home / Railroad Stories: The Way It Was / Railfan Stories / For Mike Schafer, there’s always a shot

Train photography led to a career in railroad journalism 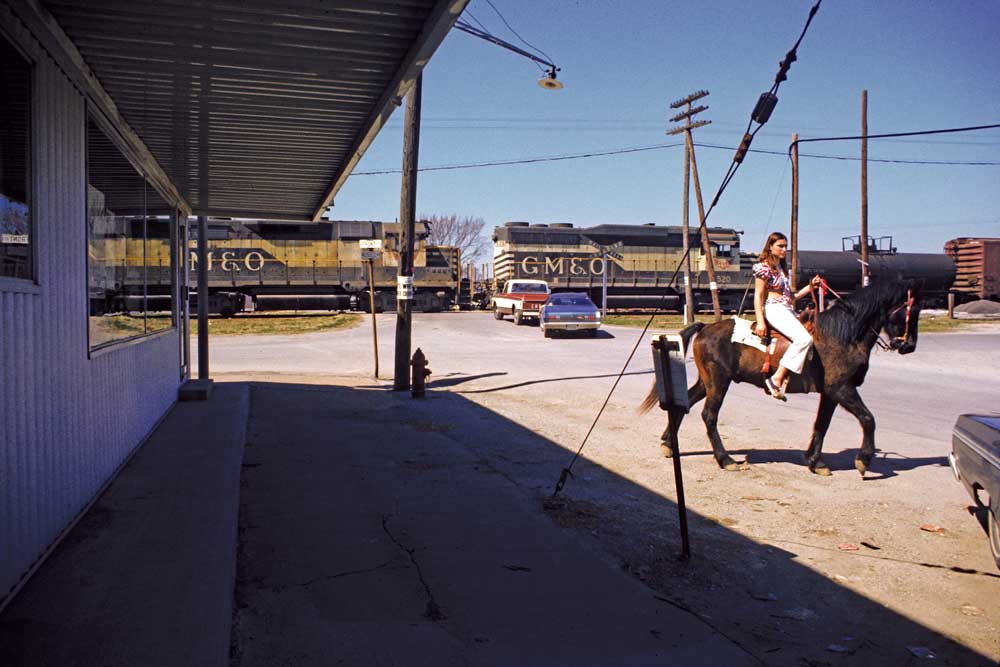 Although I’ve never been great with a camera, I’ve enjoyed a life immersed in railroad photography, thanks to my good fortune at being able to edit railroad magazines for most of the past 40 years. I’ve had my favorites, of course, but I’ve tried to be as neutral as possible when it came to photographers. Serving the story or the topic comes first, choosing who gets the credit line is second. That’s the goal, anyway.

But it hasn’t always worked out that way. When you spend a career sifting through tens of thousands of 8×10 black-and-white prints and 35mm color slides, you start looking for that one approach — that certain signature — that not only makes your life as an editor easier but also means “great photograph.” Quite often that search led me to Mike Schafer.

Mike and I sort of grew up together in this business, even though we came at it from different directions. He was one of those young lions of railroad photography who began emerging in the late 1960s and blossomed in the ’70s, often in the pages of Trains and other magazines, as well as on the slide-show circuit. In fact, it was thanks to the latter that Mike and I first met in 1972 at a Michigan Railroad Club program in Detroit.

We were nearly the same age — I was 21 — and we immediately hit it off. And fate was good to us: we’d work together often in the years to come, first at Kalmbach Publishing in the mid-1970s and later on at Passenger Train Journal when I was managing editor and he was art director. I think having easy access to his incredible archive of passenger images gave PTJ a distinct elan in those days.

Which brings us to the latest issue of Classic Trains, Winter 2022, in which Editor Brian M. Schmidt has assembled a Schafer showpiece, Mike’s tribute to the Gulf, Mobile & Ohio. Some of the photos from the story are included here.

This is the Schafer style I’ve always known and loved: beautifully composed images of a Midwestern railroad that, while not in its prime any more, still compels. As he so often does, Mike captures the essence of the GM&O with railroad pictures, not train pictures.

Mike’s instinct for composition can be credited partly to his genes: artistic talent runs in his family, from his late father, Don Schafer, a tool-and-die maker whose drawings left Mike “astonished,” to his half-brother Mark Schafer, a graphic designer who has counted the Chicago Cubs among his clients. He describes his sister Maureene as a talented artist; her daughter, Mike’s niece, is an art teacher.

And it was an aunt, Bert Magnuson, who led Mike to what became his calling, the 35mm slide. “She entertained us kids with slide shows of stuff she shot while serving as a Navy nurse during the Korean War, plus family-related photos,” Mike explains. “I was fascinated by the color slide format and took my first railroad slide on Nov. 27, 1964, a scene at Santa Fe’s Chicago engine terminal. I was sold on the photography thing.”

But beyond genetic predisposition, a successful artistic career is also made up of influences. Perhaps the prime one for Mike was the late Jim Boyd, the celebrated photographer who edited Railfan magazine for decades and in some ways came to personify the genre. Mike met Boyd around 1964, after the latter graduated from Milwaukee’s now-defunct Layton School of Art. The two became fast friends.

“I met Jim when he joined our local model railroad club in Rockford,” Mike recalls. “At our Friday night meetings, he brought his projector and did slide shows. I was blown away.

We did a lot of railfanning with J.B. through the rest of the 1960s, and he was always happy to share photography tips, mostly having to do with composition. He was a wizard at it.”

Meanwhile, Mike went on to make his passion “official” by graduating from Northern Illinois University with a degree in art and art education. From there he followed the usual track of the railroad photographer, doing roster shots of diesels until — unsatisfied — he began to widen his horizons, literally.

“I began experimenting with action scenes, attempting to get to a location long enough before the train so I could scope how I might compose the scene. I look for elements in the location that can enhance the photograph — trees, water, interesting buildings, whatever I can do to avoid just another mundane, three-quarter view.”

Exhibit A might be the accompanying photo showing GM&O train 233 hustling through Stanford, Ill., behind a pair of F units in the summer of 1972. This image says a lot about how Mike operates: his decision to shoot on the “wrong” (or shadow) side, his perspective from a very low angle, his use of the grade-crossing sign to frame the image, and his embrace of all those jarring angles from the grain-elevator complex. Nothing mundane here.

When I think about being out on the road with Mike — and we’ve had a couple of memorable road trips of our own — I imagine a situation in which we drive up to a scene and I scowl and say “there’s nothing here.” For Mike, there’s never “nothing here.” There’s always a good shot somewhere, somehow.

2 thoughts on “For Mike Schafer, there’s always a shot”