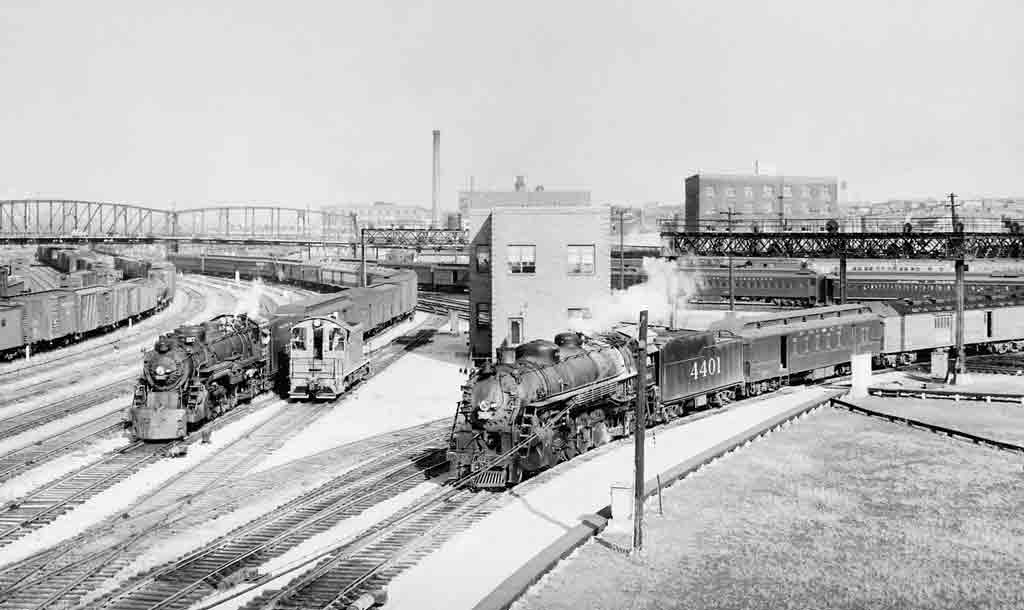 St. Louis, late 1940s: After a “race” that was not as close as the one author John Mills saw in 1941, MP 4-6-2 5327 rolls the Missourian past a Terminal Railroad Association Baldwin diesel as Frisco 4-8-2 4401 backs the Will Rogers into Union Station.
Harold E. Williams
What could be more exciting to an 11-year-old who loved trains than a full-fledged passenger-train race? Forget about the famous one departing Chicago’s Englewood Union Station eastward between the famous crack New York Central and Pennsylvania Railroad flyers—those are already well documented. “My” race, though with trains not as prestigious, was much longer, about 35 miles. Moreover, it often ended in a dead heat.

The combatants were Missouri Pacific and Frisco trains approaching St. Louis from the south in early morning. From suburban Tower Grove eastward for the first few miles, the railroads ran almost parallel and the passengers on both would soon be caught up in the competition. The train crews would wave and gesture to each other, and the whistle sounds were added flavor to the competition.

A July 1941 trip to St. Louis to visit relatives and attend a St. Louis Browns vs. Boston Red Sox baseball game at Sportsmans Park (in which I saw Boston’s Ted Williams hit a home run) was just one of the times I witnessed this galvanizing race, but it was perhaps the most memorable. An hour before our scheduled arrival at St. Louis Union Station, some 6.6 miles north of De Soto, Mo., near Hematite on Missouri Pacific’s old “Iron Mountain” line, is where the race began. I was aboard MP train 18/28, the combined (at Knobel, Ark.) Hot Springs Special and Tennessean.

At that location, the MP track passed under the Frisco’s “River Line” which came up from Memphis to St. Louis, and suddenly our train was being passed overhead by Frisco 806, the Memphian, with an eight-car consist behind 4-6-2 Pacific No. 1025: four head-end cars, two coaches, a snack-lounge, and one 16-section Pullman. Our train was made up of a 4-8-2 Mountain type locomotive, No. 5338, and 12 cars: five head-end, three coaches, three Pullmans, and a coach-cafe-lounge. The four Memphis cars had been switched into the middle of the train at Knobel.

Shortly after it went overhead on a wooden trestle, the Frisco train was slightly behind us, with both trains traveling about 60 to 65 mph. The Frisco then veered off toward the northwest, which resulted in it coming into Tower Grove from a southwest direction, scheduled to make the suburban stop at 7:18 a.m. Our train was due into Tower Grove at 7:21 and had a more difficult route to follow, including 20 miles along the Mississippi River. Our train also had three conditional stops, to discharge passengers only, but on this morning we made none of them. If only one of those stops were made, the MoPac train would lose the race into St. Louis Union Station. The winner was usually determined by the first train to receive a clear signal at the Frisco-MoPac crossing just west of the separate depots at Tower Grove, although getting past Lindenwood Yard in St. Louis sometimes delayed the Frisco train.

On the morning in question, we arrived first at Tower Grove and quickly discharged our passengers. Just as we began to move, I saw the smoke from the Frisco engine from over at the Frisco station as it pulled in with train 806. We got a slight head start from Tower Grove before I heard the Frisco “highball” of two short toots from the whistle. Thus did the final lap begin for the Grand Avenue junction, where the Terminal Railroad Association trackage started.

Now, progress from Grand Avenue to the east end of the wye tracks, where trains backed into Union Station, depended on the TRRA dispatchers. Luckily we got green signals and came to a stop just as the Frisco train pulled up alongside us not 10 seconds later! The race was over. We won!

In a way, the race was not the highlight of our St. Louis arrival, at least to this 11-year-old, for when we finally stopped under Union Station’s giant trainshed, we were greeted by no fewer then a half dozen round-end observation cars of streamliners either having just arrived or making ready to depart. The St. Louis morning lineup included the likes of MoPac’s Eagle, Illinois Central’s Green Diamond, Alton’s Abraham Lincoln, and Burlington’s Mark Twain Zephyr, Zephyr Rocket, and Pioneer Zephyr. What a sight!

And oh yes, competitive action also was known to take place on MoPac’s and Frisco’s lines westward, between Pacific, Mo., Tower Grove, and St. Louis, with MP 16, the Sunflower, and Frisco 2, the Texas Special, as well as other trains on those almost-parallel lines.

One thought on “First train to Tower Grove usually wins”