Home / Railroad Stories: The Way It Was / Railfan Stories / Dad, trains, and me

A son remembers a special encounter with a Grand Trunk 4-8-4, and all that it stood for 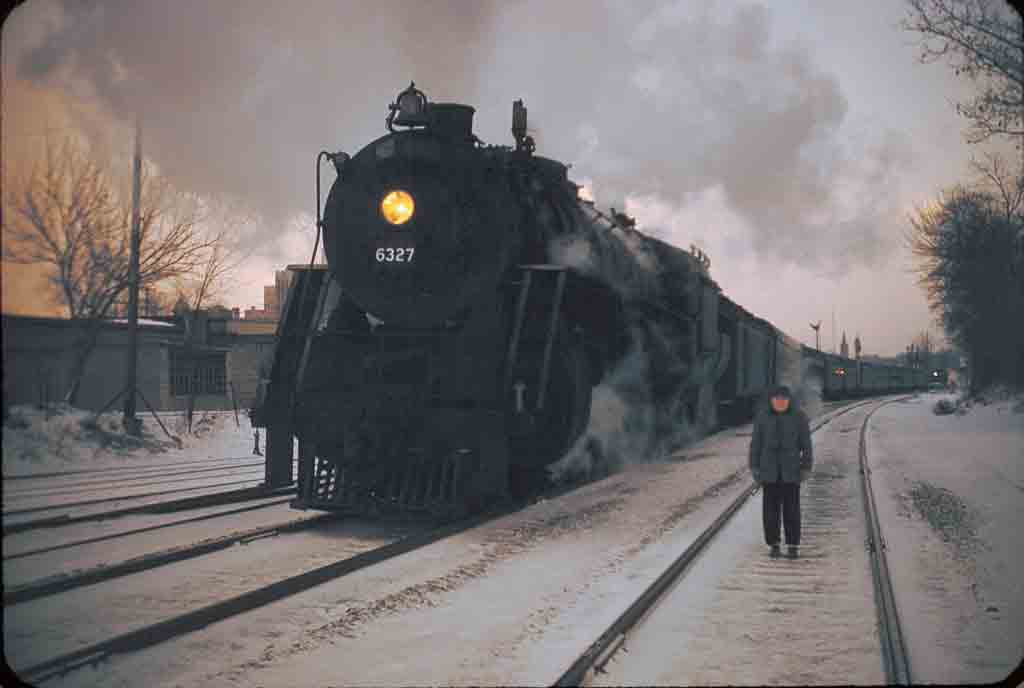 In a photo by his dad, 11-year-old Michael Landry stands in Pontiac, Mich., with the Grand Trunk Western 4-8-4 they rode from Detroit on March 24, 1960.
Hank Landry
There I am, 11 years old, dwarfed by the Grand Trunk Western 4-8-4 on the next track during its stop at Pontiac, Mich., on March 24, 1960. This picture [following page] represents several things to me: Gratitude for my father’s appreciation of my love for trains, one of the final glimpses of U.S. Class 1 steam railroading, and one of the last things my dad gave me before he died.

Often I’m impressed by how contributors to Trains and Classic Trains refer to their fathers. For some, their fathers were railfans who took their sons on rail outings, thus passing on an interest in the hobby. Others were professional railroaders, and visits to Dad’s place of work and a resulting cab ride or some other “inside view” fostered a lifelong love of the industry. In my case, the love of trains began elsewhere, but my dad went out of his way to support it. That’s the story behind the picture.

On this unseasonably cold spring day (“Michigan: Where March comes in like a lion and stays that way”), Dad and I had just completed a 26-mile ride in the cab of 4-8-4 6327 from Detroit’s Brush Street station to Pontiac. At my request, he had secured liability releases from the railroad, taken time off work so we could catch a mid-afternoon bus from Pontiac to Brush Street, and then rode with me on the head end of GTW’s Detroit-Durand train 19. Dad was not a railfan, although as an antique collector he appreciated steam engines and history.

It was not from him that I came to love railroading; rather, like many boys in that era, Lionel was my gateway to the world of trains. And my father was great about encouraging that. He would drive me to trackside when I asked, or take a detour on a family vacation so I could see an obscure short line or other rail attraction, or stop the car or circle his private plane so we could get pictures of rusting steam hulks in a scrap line or some such thing. As I said, he appreciated the history, but, unlike me, was not an enthusiast. In fact, I can still recall him wondering at my junior high school knowledge of locomotive numbers, specifications, and rail trivia and saying: “Why can’t you do that well on your schoolwork?” (Actually, it worked out OK, since in my career as a university business professor I sometimes teach a course in logistics in which I can draw from my rail knowledge.)

Back to the picture. Our cab ride that blustery Michigan afternoon was an event that could not be repeated. Within days, GTW’s order of new EMD switchers and Geeps would essentially banish steam from regular service on U.S. Class 1 rails. Only a few steamers would remain active on the Norfolk & Western during that spring of 1960, and a lone 2-8-0 would work on a Colorado & Southern branch until 1962. Otherwise, except for the occasional fan trip and the later tourist-train renaissance, American steam faced a slow death for another decade or so in shortline and industrial service. As a result, Dad and I were among the last witnesses to the Big Show.

Time passed. Like many others, I made my peace with diesels, and, as I grew up, faced a life more complicated than questions of what engines would be on 428 tonight, or what would happen when the next train-off petition was granted. There were issues of education, careers, marriage, family, and more.

But I continued to chase trains every now and then. In fact, I still do. And my dad came along on occasion. I have great memories of him in the late 1980’s accompanying my two sons and me to watch Union Pacific Challenger 3985 storm through Harmon, Wyo. And for my 40th birthday in 1988 he joined my mother in luring me from my home in Colorado to Indianapolis for a surprise trip behind then-recently restored Nickel Plate 2-8-2 587.

But a severe heart attack in 1984 somewhat limited Dad. Toward the end of 1992, his health was failing and we knew he had little time. I visited him that fall for what I knew would probably be the last time. Weak and wasted on a hospital bed in Ann Arbor, Mich., he told me to check with my sister-in-law about something he had given to her for me. I did, and she handed me this picture. It was something I had forgotten about for a long time. Previously I had only seen it as a slide, but Dad had gotten my sister-in-law to have it made into a framed print for me. Six weeks or so before his death, Dad thought of my love for trains and gave me a remembrance of that cab ride we took more than 30 years before.

I’ve got a lot of train pictures, some of them with better action, better composition, better lighting, and certainly with better interest than an 11-year-old boy taking up space. But this one is special. I tend to spend a lot of time gazing at it. In it, I recall the final days of Grand Trunk steam, those great old heavyweight coaches, semaphore signals silhouetted against a fading sky, later winter trips home from college to this same Pontiac station, and the cold, cold air of that brisk Michigan winter-trying-to-turn-into-spring. And I remember how my father went out of his way to accommodate my oddball interest in railroading.

To me, it’s a great picture.