Home / Railroad Stories: The Way It Was / Railfan Stories / Boarding the cars at Guthrie

A 1968 ride to St. Louis required patience and a tolerance for misinformation and indifference 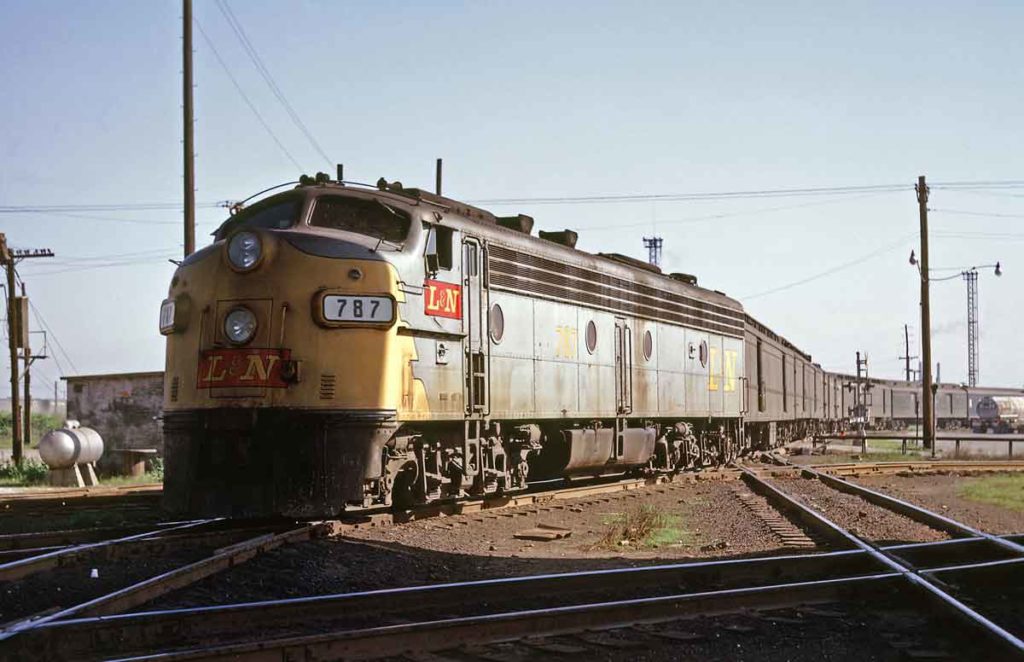 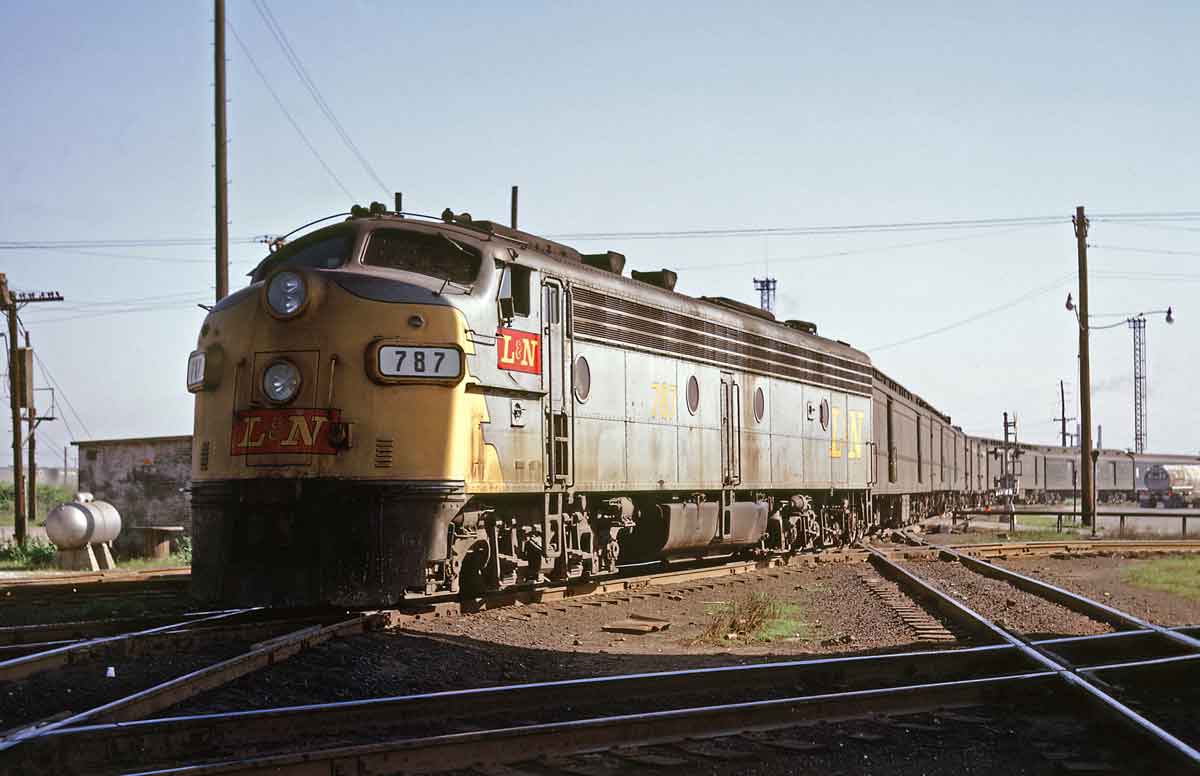 Louisville & Nashville E8 No. 787 leads the head-end cars and lone coach of Evansville–St. Louis train 10 out of East St. Louis in May 1968.
R. R. Wallin, George W. Hamlin coll.
“No, that train doesn’t stop here. You’ll have to go up to ‘Hoptown’ to get it,” was the less-than-helpful information from the Louisville & Nashville agent in Guthrie, Ky., when I asked him about boarding there. The 12:42 a.m. schedule from Guthrie was already pressing the limit of a “convenient” departure; 1:15 a.m. and 24 miles down the road to Hopkinsville undoubtedly put this into the inconvenient category, and would strain the graciousness of the people taking me to the station.

Taking the L&N from Guthrie to St. Louis for a few days of train-watching in July 1968 had seemed like a logical thing to do, even if it involved sitting up all night in a coach seat. And while the L&N timetable portrayed this as two separate trains (No. 4, Atlanta–Evansville, Ind., and No. 10, Evansville–St. Louis), I had a strong suspicion that it was in fact a through service. Guthrie (and Hopkinsville, for that matter) were conditional stops, but the “Y” printed next to the time designations for both locations indicated that No. 4 “Stops to leave or take revenue passengers from or to Evansville or Nashville and beyond,” and my planned journey complied with this requirement.

Since we were in Nashville the day before my departure, a stop at Union Station verified that the Guthrie agent was mistaken, and that the train would indeed stop there on demand, per the timetable. And just to be sure it did, the Nashville agent suggested being very visible on the platform, and indicating to the crew that I wished to be picked up. I’d have to buy my ticket on the train from the conductor, of course.

Late Sunday evening, we drove the short distance to Guthrie, located at the junction of L&N’s Nashville–Evansville and Bowling Green–Memphis lines. Although the depot was not manned at that hour, the lights were on and a crew member intending to deadhead to Madisonville, Ky., was inside. When asked whether the train would stop, he laughed, and said that it always did for him, and he certainly expected that it would tonight. So much for the requirement that revenue passengers be involved!

It was a pleasant evening to stand outside, and not too many minutes beyond the scheduled time, No. 4’s headlight appeared and the train slowed for a stop to pick up its two patrons. This remnant of the once-proud Georgian consisted of an E8 followed by five baggage and express cars, with L&N coach 3200, still lettered for the Humming Bird, bringing up the rear.

The conductor swung down from the vestibule at the tail end of the train, and greeted the crew member, whom he seemed to know well. When I stepped up next, he inquired about my destination, and upon hearing “St. Louis,” said “That will be to your left”—an appropriate direction, as turning right led only to the ties and ballast.

I found a seat and settled in next to another employee, headed to Evansville. We departed Guthrie and achieved a moderate pace, although not sufficient to avoid being passed by trucks on the parallel highway. My seatmate was in track maintenance, and remarked that this was one of the roughest lines on the railroad; in fact, we did seem to be making almost as much progress up and down and side to side as forward, but the moderate speed kept any discomfort to a reasonable level.

After a while, it dawned on me that the conductor had made no attempt to collect my fare, so I located him in the men’s room, at the forward end of the car. He seemed confused at my presence, and it dawned on me that he thought I was an employee—apparently revenue passengers at Guthrie were few and far between. With my status resolved, he removed a battered tariff from his pocket and began thumbing through it to determine the fare. After some minutes of searching, he looked at me and said, “How much have you been paying for this ride usually?”

My response that it was my first trip on this line sent him back to the tariff, and shortly he announced that it would cost me $10.42. I paid and was issued a cash receipt, and went back to attempt to sleep. Success was not great on that score. I remember much of the ride, including a lengthy stop in Madisonville for no discernible reason, as well as the elevated approach to the Ohio River crossing between Henderson, Ky., and Evansville.

At the latter, there was a crew change. The new conductor was large and had a relatively belligerent manner. His idea of customer service involved turning the lights fully bright at 4:15 a.m., and loudly demanding all tickets.

While the car hadn’t been full up to this point, a large crowd boarded, again including more deadheads. Since the lights were on full, and quiet had not been requested for the benefit of those who might have been attempting to retire, shop talk was the order the day, including a discussion of the relative tractive effort of U25C’s and EMD products, per the tonnage ratings in the employee timetable. Another large group of company employees consisted of a track gang returning from their weekend in Evansville to Ashley, Ill.

At least the track on this line rode better than the line south of Evansville. While there had been only three intermediate stops in the 111 miles between Guthrie and Evansville, we made 11 en-route stops in the 165 miles to St. Louis, including towns named Mount Vernon in both Indiana and Illinois. Consistent with the first segment of the trip, the train made all stops, whether regular or conditional.

West of Ashley, where L&N crossed the Illinois Central’s north-south main line and where until the mid-1960s the Official Guide duly noted that the IC and L&N depots were “about 26 rods apart,” a modicum of quiet returned for the balance of the journey with the departure of the track gang. There was plenty of time to soak up the peace and quiet, since the 63 miles to St. Louis were covered in just short of 3 hours, rather than the 2 hours 3 minutes called for by the timetable.

Eventually we backed into St. Louis’ cavernous, albeit somewhat down-on-its-heels, Union Station. After a brief look around, it was time for a nap before enjoying the railroad sights of the city and its environs for the next few days.

2 thoughts on “Boarding the cars at Guthrie”