Home / Railroad Stories: The Way It Was / Learning the lingo at Flagstaff 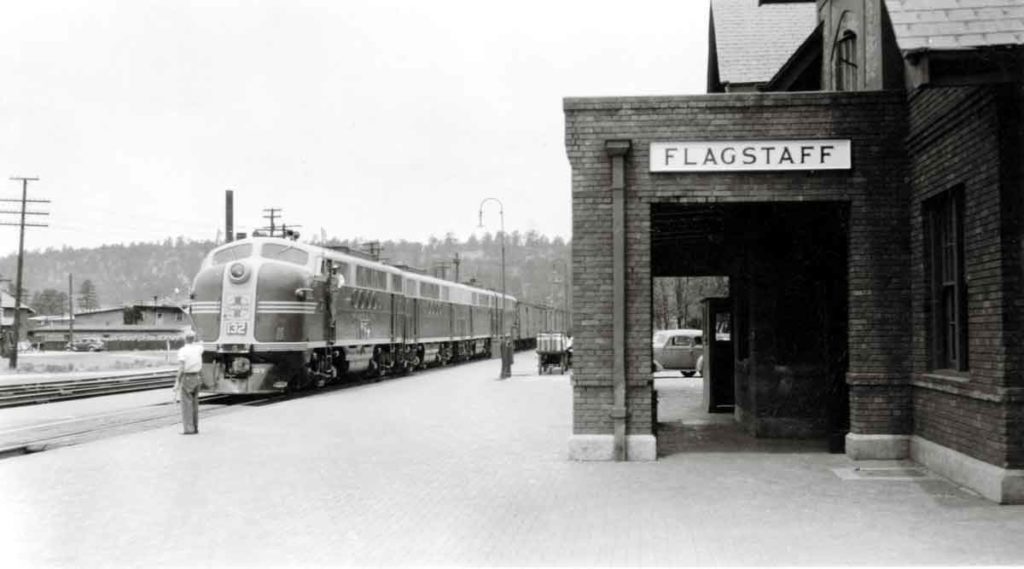 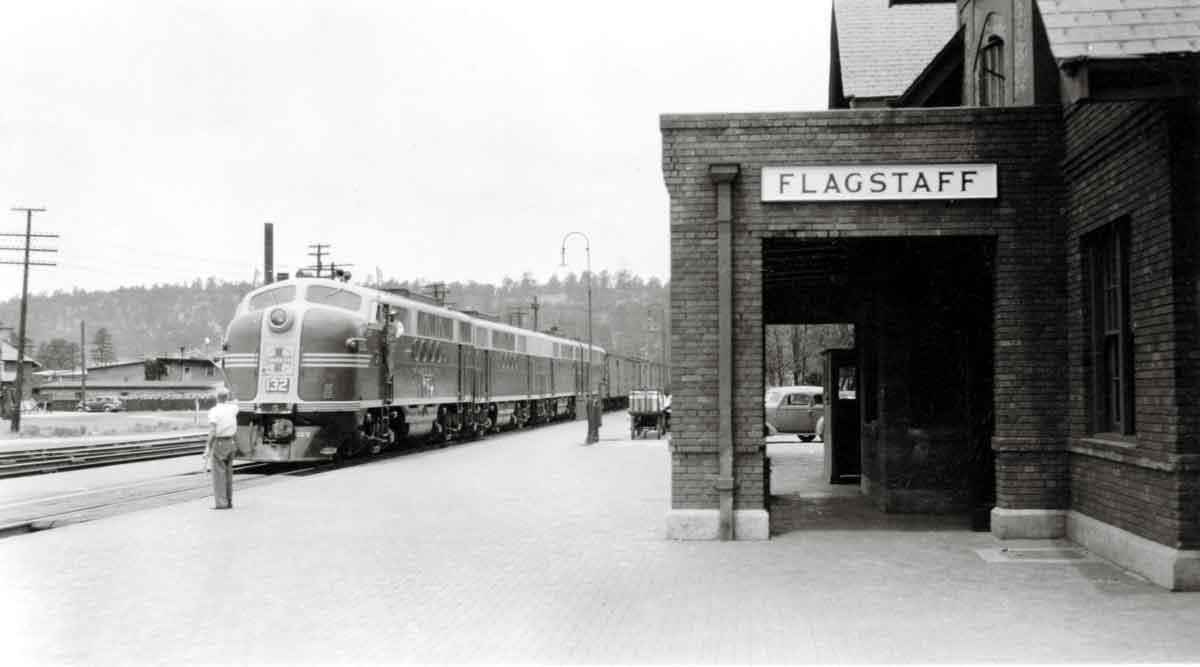 At Flagstaff, Ariz., where Santa Fe operator Elisa Lindenberg apprenticed in 1943, an operator hands up orders to an FT-powered eastbound perishables train in 1947.
Joe Lynch
The time was August 1943, the place, Flagstaff, Arizona. My mother, Elisa Ward Lindenberg, and I had come west because Zane Gray’s books had captivated her and she decided the West was her future home. She applied for work at the Bellemont ordnance depot, was told to “wait a couple days,” which turned into several weeks. Then one day, as she waited for word that never seemed to come, she was approached by a man who asked if she’d like to work for the Santa Fe Railway.

She jumped at the chance, after being told that railroads were just as important to the war effort as was working at the ordnance depot.

After passing her physical exam in Winslow and filling out the endless forms, she was accepted as an apprentice operator. Thrilled — and at the same time intimidated — she reported for work at the lovely old Santa Fe station in Flagstaff. She documented her first day’s experiences as a complete greenhorn in the world of railroading:

It is quite easy to feel confident at a distance — it is quite another thing to come face to face with the facts: going to work for the Santa Fe had seemed utterly wonderful yesterday, but today I was frankly scared. So, to bolster my courage, I chose my prettiest New York dress for my debut as apprentice operator, only to discover, on reaching the depot, that I might as well have donned sackcloth, for all the notice the masculine quartet, whose sanctum I had invaded, took of either me or my clothes. Women, I was told curtly, had never before been admitted inside that office.

Distinctly under the impression that my welcome was not the warmest, I made my way to the telegraph key on the desk at the bay window. I felt the hostile glances at my back relegating me and my blue-and-white rayon print dress to the limbo of discarded rags. That nobody seemed to want me there struck me as strange, and I decided the best thing to do was learn as fast as I could and then transfer elsewhere.

What I learned first of all was that, to be able to learn, I must first acquire the queer jargon that was the accepted language of the railroads.

Still too proud to ask questions of people who evidently did not want me there, I blundered along by myself, until a subtle change in the attitude of my companions caught my attention. Why had they changed? My relief at having been accepted by my coworkers was stopped by the humiliating discovery that neither I, nor my New York dress, had anything at all to do with it. It was in fact my incredible ignorance that had finally awakened their interest in their apprentice.

Like nearly all the people I was to come in contact with from now on, these men had grown up with railroading. They had assumed that I, embarking upon a like career, must have come from a like environment. When it dawned on them that, far from trying to be funny, I was actually desperately earnest, their hostility turned to perplexity, then to amazement and finally, because chivalry was not dead after all, into a genuine desire to help me.

Now, if at this juncture I had admitted to them, as well as to myself, how much in need of help I really was, all would have gone well. But would Elisa Ward admit to anything so damaging to her ego? So, when told to report a passing train to the dispatcher, rather than show ignorance by asking who the dispatcher might be or how to contact him, I blithely queried, “What’s his number?” When incredulous stares met this unwitting sally, I put my foot still deeper in it by adding, “Where can I find him then?” I probably saved myself from eternal disgrace by keeping my mouth shut on my next remarkable supposition that the dispatcher might be the agent in the freight house.

“Step on that pedal and speak into the phone,” I was told patiently. “Take your foot off the pedal to listen.”

This worked, although I had no idea how. Nor would I ask. Instead, I cheerfully explained to my puzzled audience that I did not know the Santa Fe used a different kind of telephone. This time they fully believed me, and kindly took time out to instruct me in the elementary process of private communication.

As part of my training, I was instructed to don the earphones and pay attention to what was said over the Santa Fe phone lines. They might as well have told me to listen and understand a Siamese dialogue well sprinkled with strong Indonesian expletives. Why, I asked myself with mounting despair, had no one ever thought of inventing a railroad dictionary and conversation manual for the benefit of idiots who, like me, want to know everything without asking?

While I was glumly absorbed in this problem, my instructor, looking over my shoulder out the window at a train that had just stopped, said, “You can tell the dispatcher the extra west is in the hole.”

“In the what?” I cried aghast, rising from my chair to try and catch a glimpse of the wrecked train. What I caught was the icy gleam in the blue eyes of my instructor. I sank back.

“Don’t you know what it means when a train goes in the hole?” he asked. I shook my head. “It means a train has gone in a siding to let another one by.”

Soon after, a small train arrived. The engine uncoupled and went off hunting for cars around the yards. When it found what it sought, it returned to its train, hitched itself back on and puffed contentedly out of the yards. My instructor, now back in his chair, watching the caboose disappear beyond the freight house, turned to me and instructed me to go see if the local east had left any soup.

“Soup!” I looked hastily around for signs of a steaming tureen, or maybe a dinner pail. My instructor frowned. “Go look in the jar,” he said tersely.

But of course. How silly of me. A glass jar would naturally be the most convenient receptacle for soup, though why a freight train should be leaving soup at the depot, with perfectly good restaurants right outside, was beyond me. Obediently I went to the jar.

“There’s nothing here, except papers,” I reported — and my instructor, rising from his chair, came toward me.

“Don’t you even know what a soup ticket is?” he asked.

“Oh, a ticket.” I smiled, relieved. So that was what these slips of paper were, meal tickets. How silly of me not to think of that before. In sudden dismay I studied these slips more closely: “Loads,” “Empties,” “Red Ball” — could it be, I asked myself in mounting uneasiness, that food, too, was known on the railroad by different names? My instructor fished one of the slips out of the jar and gave it to me.

“That’s a soup ticket,” he explained. “The list of cars and tons filed by the conductor to show what his train has in and out of a station. Go give it to the dispatcher.”

I swallowed the information in silence, and hoped the dispatcher would have less trouble swallowing the soup.

Before the day was over, I had made myself a sort of private railroad encyclopedia that went something like this:

SOUP TICKET: list of cars and tons.
HOLE: siding for trains to get into.
HOGHEAD or HOGGER: locomotive engineer. (Once I asked a conductor, in all good faith, if the rear end of a train was known as a “hogtail”; the only answer I got was a glacial stare.)
DOG-CATCHERS: not gangs of men sent out to grab stray curs off the tracks, but rested crews sent out to relieve — or “dog-catch” — the crews whose legal working hours were over.
CABOOSE HOP: not the last car of a freight train that has become derailed, but a lone caboose being hauled by an engine with no train in between.
LIGHT ENGINE: any locomotive running by itself, regardless of its weight.
TO GET HIGH BEHIND: to get moving in a hurry.
SWINGER or SWINGER: not a daring young man on a flying trapeze, but an added member to the regular crew.

Mother finally gained the respect and admiration of her mentors for her tenacity and willingness to learn. She was then transferred to other points on Santa Fe’s main line across Arizona. But that’s another story.

One thought on “Learning the lingo at Flagstaff”