Home / Railroad Stories: The Way It Was / Crisis at the coal chute! 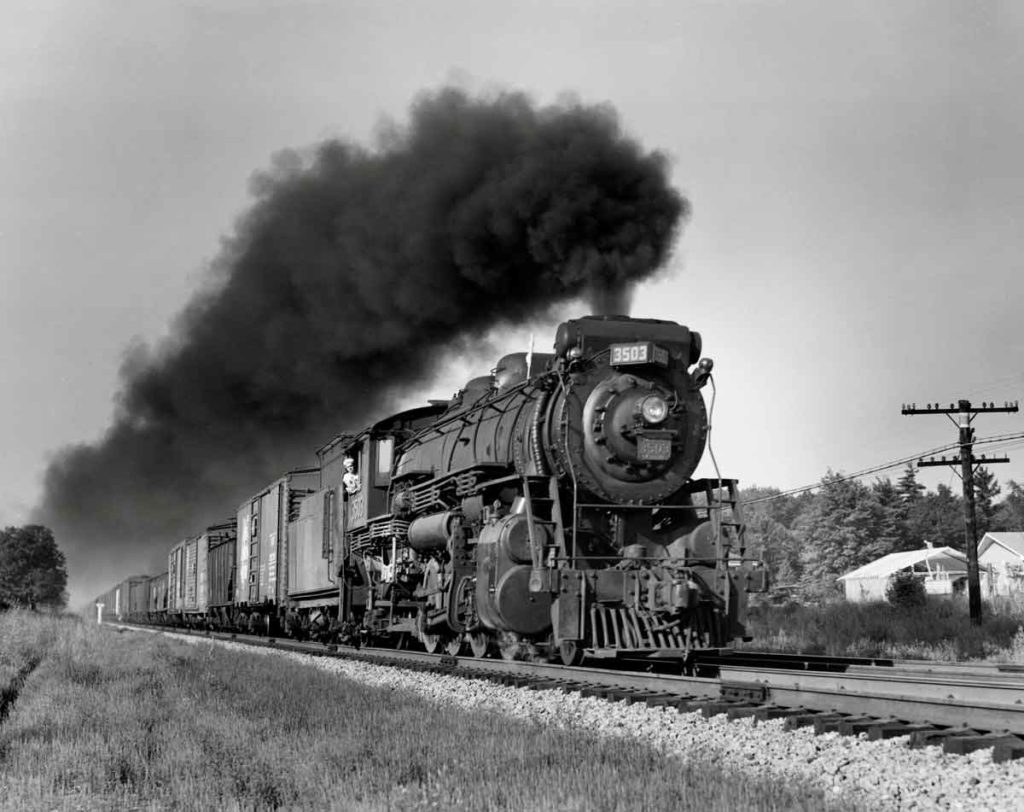 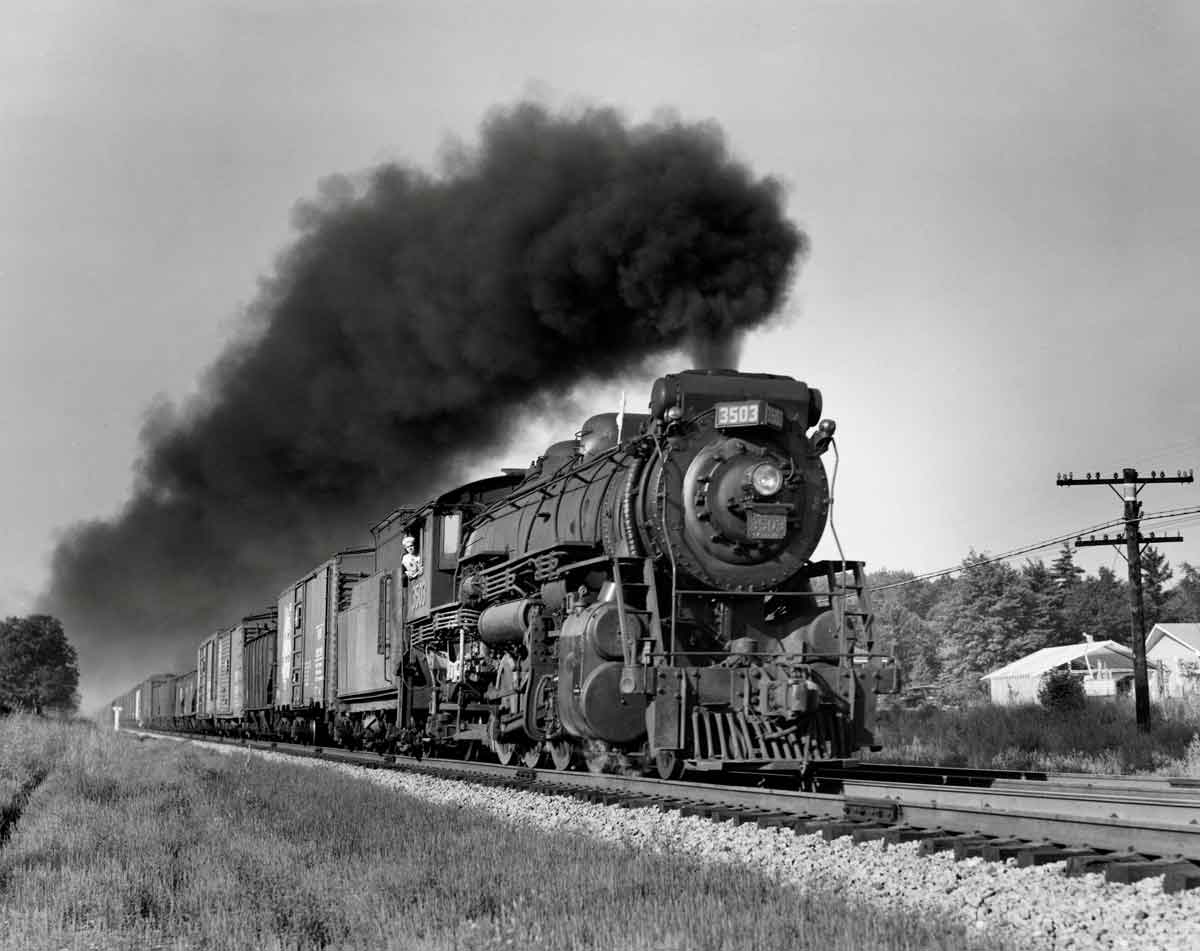 The engineer of Canadian National 2-8-2 3503 enjoys the breeze as he hurries a freight east at Lorne Park, Ont., in August 1955, a year after the author’s experience on another CN Mikado some 700 miles to the northwest.
W. H. N. Rossiter
A steam locomotive fireman’s duties go far beyond the actual firing of the locomotive. Besides “keeping her hot,” with full steam pressure and lots of water in the boiler, he had to replenish the coal and water in the locomotive’s tender. The latter were not always pleasant duties, but necessary if you wanted to keep that big steamer hustling over the road.

I learned about these tasks in my early 20s, when I was a Canadian National Railways fireman with a starting date of October 8, 1950, and working in the wilds of northern Ontario. Filling the tender with water could be a relatively easy, even enjoyable chore on a mild day. But you had to be careful in the frigid cold weather during the winter, as overflowing water would freeze almost immediately as it hit the ground, making for very slippery, awkward, and dangerous conditions. Taking on coal was another story. I was never too excited about stopping at a coal chute to refill the bunker with black diamonds.

Sometimes taking coal at a wayside coal chute would turn into a balancing act. Many CNR engines had coal bunkers that did not extend the full width of the tender. Standing on the narrow walkway alongside the bunker, you held the chute in a downward position with one hand and pulled the chain that released the coal from the chute with the other. On tenders not equipped with side walkways, you had to stand on the edge of the coal pile, being careful not to slip into the big space in the tender that you were about to fill with tons of hard, dusty material. Lots of fun, especially at night or in inclement weather. Some coal stops were particularly memorable, and two stand out all these years.

In this first instance, I was firing a 2-8-2 Mikado on a manifest freight train heading east on the transcontinental main line toward the terminal of Hornepayne, Ont., 39 miles west of CNR’s crossing of the Algoma Central Railway at Oba. It was a blistering hot day in August 1954 with an exceptionally strong south wind. The small lumber town of Caramat, about 75 miles west of Hornepayne, would be a double stop for our train, as we would be taking both coal and water. As we got closer to the Caramat yard limits, the skies turned very dark, and lightning and thunder were making their presence known. But there was work to be done, and I was the one to do it.

While I was taking water at the huge tank, down came the rain in a torrential fashion, soaking me to the skin in a matter of minutes. That wasn’t really so bad, considering the day’s oppressive heat and the fact that I’d soon be back in our Mikado’s vestibule cab, which was like an oven in the hot weather. I’d dry out quickly in there. When the tender had filled with water, I pushed the spout back into position and stayed on the tender deck as the engineer moved us up to the coal chute.

As luck would have it, the chute was full of dry, powdery coal. Black dust flew everywhere as the coal slid down the chute. The strong wind was blowing right into my face, and the coal dust stuck to the wet me like glue on paper.

When I got back into the cab, I was a sorry sight, covered in coal dust from head to toe. The engineer, head brakeman, and I all had a great laugh at my expense. However, thanks to that toasty cab, within 10 miles I was totally dry, and the coal dust came off with no problem. Thank goodness for the squirt hose in the cab, which gave me enough warm water to clean off my somewhat dirty face. Needless to say, my overalls and other clothing made a quick trip to the washing machine upon arrival in Hornepayne.

My second memorable coal chute incident involves firing a passenger train in January 1955 west from Longlac, Ont., to Port Arthur (now known as Thunder Bay). It was a cold night—of course, what other kinds are there in northern Ontario in winter? We had hand-fired 4-6-2 Pacific locomotive No. 5101 and a train of four passenger cars. We were due into Nipigon, 72 miles from Port Arthur, around midnight and were to take coal there.

The 5101’s tender had no side walkways, so I began my balancing act on the coal pile. Filling up the bunker was no problem—the fuel had not frozen in the chute—and we took on a load of at least 8 tons. After I had released the chain and the chute should have closed, in the dark I could hear some coal still trickling out of the chute onto the ground. In a hurry to resume our journey, without thinking I yanked quickly on the chain to close the chute—as I was standing below it. This did close the chute, but it also brought down a bucket or two of coal directly on top of me! A good deal of it went right down the back of my neck, making for a very uncomfortable situation.

I retreated to the warmth of the Pacific’s vestibule cab as we pulled up to the water tank and then to the station for a passenger stop. While we were at the station, I put a good supply of coal into the firebox to get us out of town, and to give me a few minutes to peel off my overalls, sweater, and shirt to free myself of the coal that was certainly an irritation. My engineer and I had a good laugh over this, but after getting dressed again, it was a pleasure speeding along and heading for home, with an arrival time of 3:15 a.m.

I guess you could say that the first event was unavoidable because of Mother Nature’s intervention, but the second occasion was a lesson well learned. I still chuckle when I think of these two incidents, humorous moments in the everyday life of a steam locomotive fireman.

2 thoughts on “Crisis at the coal chute!”