Home / Railroad Stories: The Way It Was / Chariots of fire on the Erie 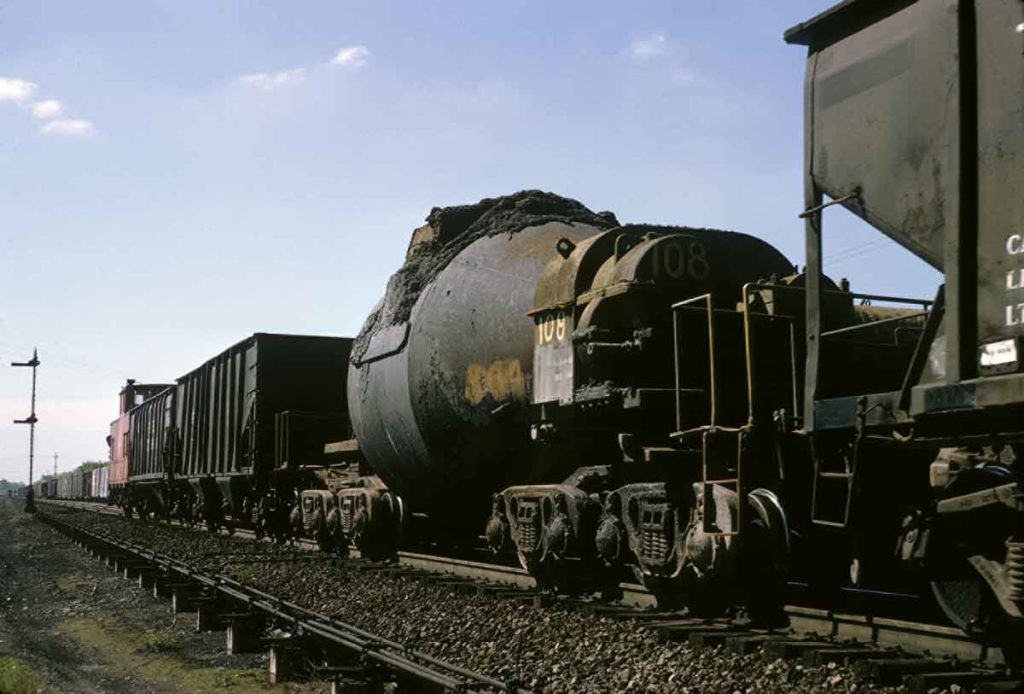 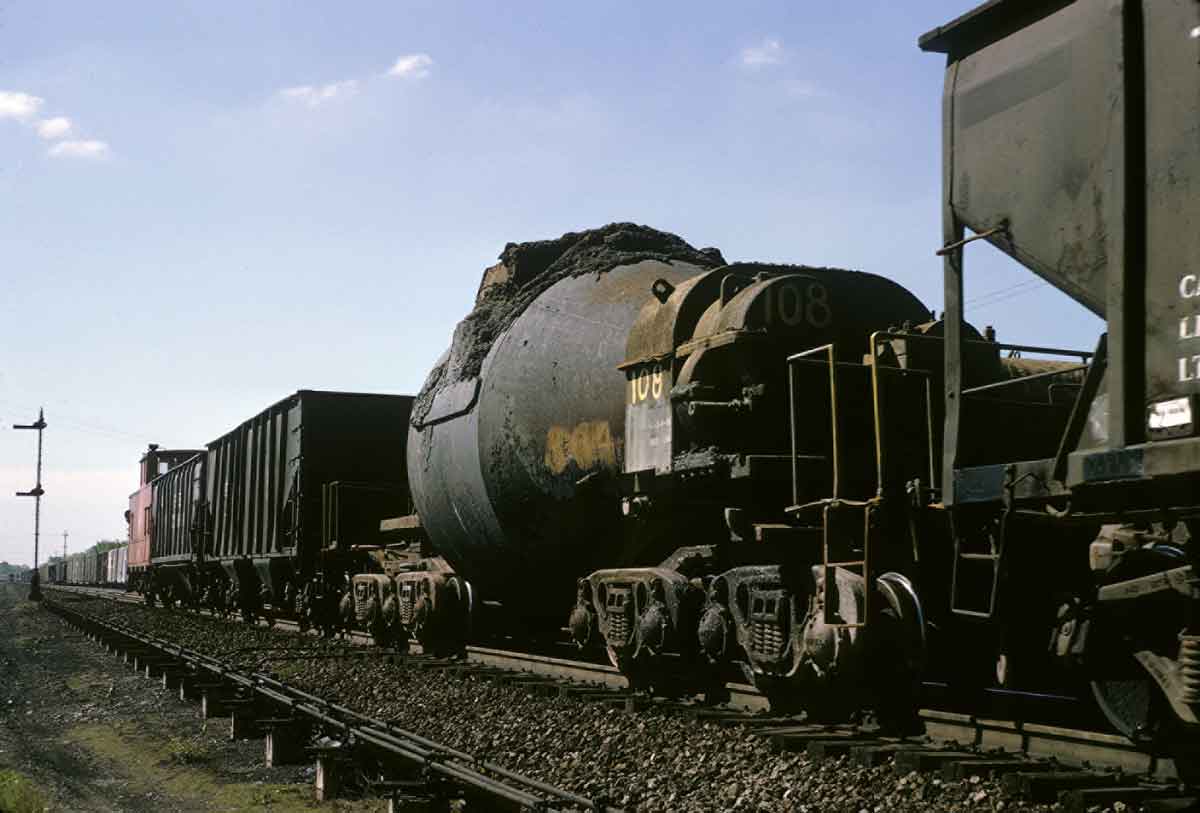 A hot-metal “bottle car,” one of three in an Erie train that included eight hopper cars as spacers, passes DeForest Junction, between Youngstown and Warren, Ohio, in 1966.
Clifford A. Redanz
One of the more interesting aspects of steel-mill railroading were the “hot-metal runs” that moved molten iron from the blast furnaces to the open hearths. The technology dates to 1914, when Jones & Laughlin at its Pittsburgh plant introduced the first “bottle” cars that could keep iron hot enough to remain molten for up to 36 hours. J&L’s innovation saved a major step in the steelmaking process by eliminating the need for “pig iron” (so named because as the hot iron was poured from the furnace, it flowed down a central channel with molds on each side resembling pigs at a trough). The early cars had a capacity of 90 net tons, but by the mid-1920s they could carry 150 tons.

Hot-metal runs were a staple of the Erie Railroad (and successor Erie Lackawanna) around Warren and Youngs­town in northeast Ohio when I was a tower operator there in the late 1950s and early ’60s. The sight of a Baldwin or Lima-Hamilton diesel switcher with three or four “bottles” and caboose was routine, as much as a part of the traffic mix as boxcars and hoppers. Some bottle cars had covers, but others did not, and these were known to spill over and cause brush fires. I remember staring into the open tops of these cars as they rumbled underneath the street bridge at Erie’s Youngstown station. It was like looking into Dante’s Inferno, and I’m sure that riding in the caboose of a hot-metal train was a little intimidating. Special instructions in the employee timetable required that, to spread their weight, the bottles be separated from each other and from the engine and caboose by idler cars. Another reason for idlers: Some of the bottle cars did not even have brakes! Speed was limited to 20 mph loaded, 30 mph empty.

The Erie’s hot-metal trains used the same tracks as passenger and freight traffic. I always mused about would happen if a bottle car derailed on its side. Luckily such incidents were few, but one did manage to turn over at Worthington Street, just west of the Youngstown station, pouring molten metal over both tracks and into the street. Those who witnessed it must have thought a volcano had just erupted. It melted the rails and turned the ties into so much charcoal. The clean-up job must have been interesting. I wonder if they used jackhammers to break up that field of solid iron.

Hot-metal runs started on the Erie in the early 1950s between Youngstown and Hubbard, Ohio. In later years they also included Warren, Sharon, and Sharpsville. As a rule, the crews made one trip per day, sometimes two. Most bottle cars were built by the W. B. Pollock Co. in Youngstown, an on-line customer for the Erie. Pollock also built slag-dump cars for intra-plant use.

These hot-metal jobs also were a source of considerable acrimony between the Erie and the Pennsylvania Railroad. At a junction just east of Youngstown called variously Center Street, N Office, or Division Street, five Class 1 railroads crossed one another at grade: Erie, P&LE, Pennsy, Baltimore & Ohio, and New York Central. It was supposedly the busiest non-interlocked railroad crossing in the U.S. This crossroads of the nation’s commerce was under the control of a switchtender employed by the B&O who directed all movements with colored flags by day and lanterns by night. It was a statutory stop, so no train moved until the switchtender beckoned him on. This included 16 daily passenger trains operated by the PRR, P&LE, NYC, and B&O. Just a few miles west, the Erie crossed the PRR main line to get into one of the mills. The crossing was controlled by a target handled by the Erie crews. Because getting into the mill with the hot-metal jobs required throwing seven switches, the Erie crews were wont to just leave the target lined for themselves. The PRR trains could wait — which they did. And this led to war.

The PRR crossed the Erie at two strategic places. One was at North Warren, where the PRR’s Ashtabula line crossed the Erie’s Second District, over which most of its hotshot freights ran. The second was at Bruin, near Greenville, Pa. Here the Erie main crossed the PRR’s branch to Erie, Pa. The critical thing to understand here is that the operators at both towers were employed by the PRR. So when the war cry came out, these operators kept their signals red even if one of the Erie’s hotshot 100’s had to cool its heels while the closest Pennsy train was many miles away.

Needless to say, the Erie had a serious tactical problem. After about an hour or so, the Erie would cry “Uncle,” and some poor trainmaster would have to be rousted out of bed to chase down the hot-metal crew. Then peace would again reign in the valley until the next hot-metal job.

Alas, with the decline and fall of the steel industry in the Youngstown–Warren corridor, such skirmishes are long forgotten. After all, the former adversaries soon had to live together when Conrail came along. And of course the Erie hot-metal runs became history, as did the Erie itself. But the bottle car is alive and well and is used all over the world in the steelmaking process.

And they have not been forgotten. Pittsburgh authorities recently named the old Monongahela Connecting Railroad bridge over the Monongahela River — modified to carry a highway after the rails were taken up — the “Hot Metal Bridge.” I wonder, if there is a historical marker to mark the Erie-PRR skirmishes at Center Street near Youngstown? There should be.

5 thoughts on “Chariots of fire on the Erie”