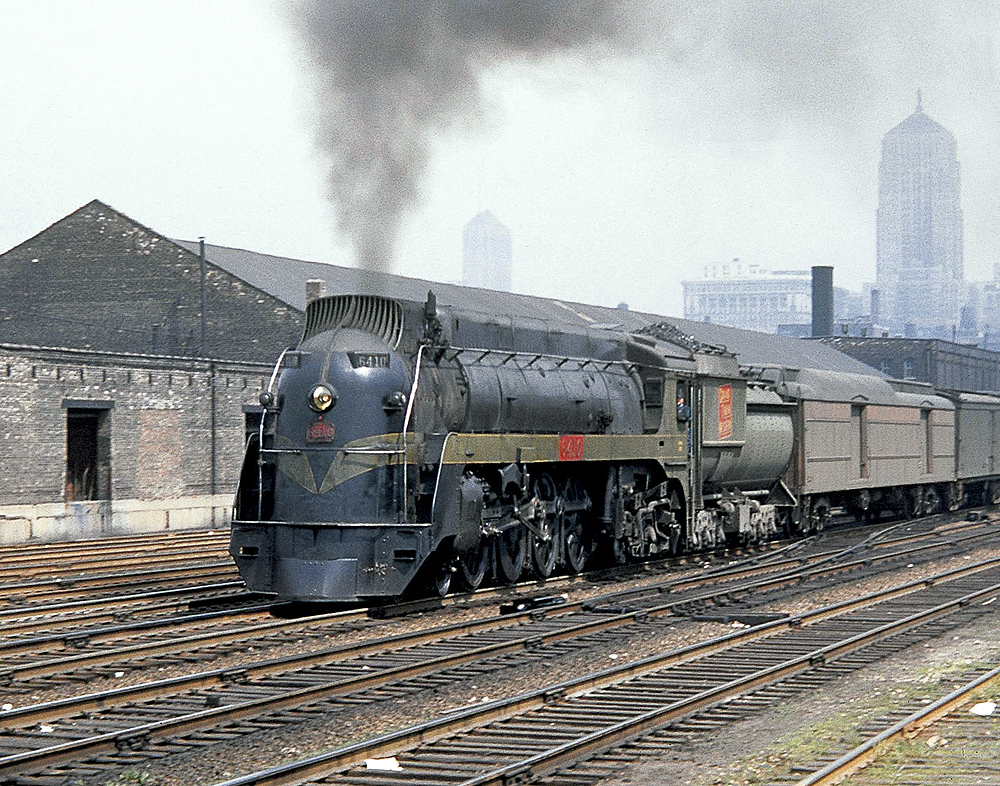 North America’s first streamlined steam locomotive was conceived by New York Central mechanical engineer Carl F. Kantola in February 1934, less than two weeks after Union Pacific motor train M-10000 introduced streamlining to the continent’s rails. Three-year-old J-1 Hudson 5344 rolled out of the shops clad in an “upside-down bathtub” cowling in December 1934. As part of its makeover, the 4-6-4 was named for the founder of the New York Central System, Commodore Vanderbilt. It was one of only two engines to be streamlined twice, trading its 1934 shrouding in 1939 for the styling given to the 20th Century Limited’s J-3 Hudsons.

The four class A locomotives built 1935–37 for the Milwaukee Road’s Hiawatha trains were extraordinary on several counts. They revived a wheel arrangement that had been out of favor for 20 years; they were the first steam engines designed for sustained 100-mph running; and they were the first steam engines built with streamlining from the start. Artist/designer/railfan Otto Kuhler devised their clean styling; Alco built them. Kuhler also designed the next generation of Hiawatha engines, the six F7 4-6-4s of 1938, whose styling was broadly similar to, but visually “busier” than, that of the 4-4-2s.

The giant PRR fielded only a handful of streamlined steam locomotives before 1945. Its first came in 1936: Pacific 3768, a 16-year-old member of the 425-strong fleet of K4s 4-6-2s. Industrial designer Raymond Loewy, whose numerous PRR commissions included the GG1 electric, devised the styling. Unlike some streamlinings, Loewy’s “torpedo” styling did not hide the steam locomotive’s principal visual element, the boiler. However, sheet metal concealed the drivers and pilot. The 3768 figured prominently in PRR publicity, heading the first eastbound streamlined Broadway Limited in 1938 and starring in the 1940 Hollywood film of the same name. PRR’s much-touted S1 6-4-4-6 of 1939 was similarly styled.

One of the largest families of streamlined steam locomotives relied on little more than a skyline casing, conical smokebox front, running-board skirts, and a colorful paint scheme to achieve a striking visual effect. The 60 engines built by Lima for SP’s Daylight trains debuted with the GS-2 in 1936 and culminated in the GS-5 of 1942. The 4-8-4s helped underwrite SP’s “most beautiful trains in the world” claim for the Daylights. The GS-4s and 5s headed the Coast Daylight into the 1950s, making it among the last top-tier trains to be steam-powered. Restored in 1975, GS-4 4449 remains an excursion star.

The effort that produced Canadian National’s five Montreal-built U-4 4-8-4s of 1936 (and six Lima sisters on CN’s Grand Trunk Western subsidiary in 1938) began in 1931, three years before the dawn of the streamline craze. Wind tunnel tests by Canada’s National Research Council, aimed mainly at lifting smoke clear of the cab, produced a design with a rounded front end and a skyline casing. Green paint on the running-board skirt, cab, and tender added
a splash of color, but the U-4 is generally not regarded as an aesthetic triumph.

Although the Santa Fe placed more emphasis on its passenger service than many roads, it had only one fully streamlined steam engine. This was No. 3460, the first in a class of six 84-inch-drivered Hudsons built by Baldwin in 1937, the same year the road received its E1 diesels. Painted a shade of light blue applied to no other Santa Fe equipment, the 4-6-4 was tagged the “Blue Goose.” It kept its streamlining until retirement in 1956.

CP’s 45 handsome Royal Hudsons of 1937–40 were best described as “semi-streamlined.” Their styling originated with the more fully air-smoothed F2 4-4-4 Jubilee type of 1936. These and other similarly clean-lined engines (including 2-10-4 Selkirks that qualify as the biggest conventional steam power ever streamlined) joined the CP roster during the tenure of Chief of Motive Power & Rolling Stock Henry Bowen, who favored the uncluttered look of engines in his native Great Britain. The Hudsons gained the “Royal” prefix, and small crowns on their running boards, after one of them took Britain’s King and Queen across Canada in 1939.

Perhaps the most iconic of all streamlined steam locomotives, NYC engines 5445–5454 were the final 10 of an order of 50 J-3a Alco-built “Super Hudsons.” Their Buck Rogers styling was the work of industrial designer Henry Dreyfuss, who also framed the look of the train they hauled, the incomparable 1938 20th Century Limited. If the finned hemispherical nose looked like a spaceship, the Dreyfuss Hudsons were unapologetically steam locomotives, with cylinders, valve gear, and drivers fully exposed. An 11th Hudson got this treatment: streamlining pioneer J-1 5344, which traded its 1934 “bathtub” cowling for the Dreyfuss look in 1939.

The 14 4-8-4s designed and built by Norfolk & Western in three batches between 1941 and 1950 were more remarkable for their performance capabilities than for their appearance. They were phenomenally powerful, and despite relatively low 70-inch drivers could attain 110 mph. N&W’s Frank C. Noel designed their streamlining along conservative lines; their solid black livery was relieved by a Tuscan-red stripe that matched the cars they hauled. When No. 611 was reactivated for excursion service in 1982, Norfolk Southern Chairman Robert B. Claytor called the J “the finest steam passenger engine ever built” — a claim that has not been seriously challenged.

The Southern’s only streamlined steam engine was classic Otto Kuhler, with a bullet nose and plenty of lines to suggest speed and style. The 1923 Pacific was gussied up in 1941 for a specific assignment: to haul the new stainless-steel Tennessean streamliner between Washington, D.C., and Lynchburg, Va., where Southern handed off the train to Norfolk & Western (which forwarded it to Bristol, Va./Tenn., where it regained SR rails for its run to Memphis). Diesels took over the Tennessean in the late 1940s, but the 1380 kept its streamlining as it worked secondary trains until retirement in 1952.

In the mid-1940s, PRR amassed the largest single class of streamlined steam locomotives: 52 T1 4-4-4-4 duplexes. Baldwin built two prototypes in 1942; designed by Raymond Loewy, they looked like nothing else on rails. Their bizarre styling was simplified somewhat for 50 production models, built by PRR and Baldwin in 1945–46. The radical machines arrived just as PRR was committing to total dieselization, and most were dropped from the roster by the end of 1953. There was a hint of the T1 styling in Loewy’s design for Baldwin’s “Sharknose” diesels, and a dozen South Australian Railways 4-8-4s were near-copies.

A small handful of streamlined steam designs emerged after World War II. One was the work of B&O research engineer Olive W. Dennis, one of the few women in the field. In 1946, as B&O was planning a new Washington–Cincinnati train using rebuilt 1920s equipment, Dennis devised a “torpedo” cowling for the Cincinnatian’s four Pacifics. One of them (5304) had worn a Kuhler-designed shroud 1937–39 for the Royal Blue. When the Cincinnatian moved to a Detroit–Cincinnati route in 1949, the 4-6-2s went with it, remaining on the job until October 1956 — years after most other streamlined steam locomotives had vanished from the rails.

A new aesthetic — “streamlining” — took hold in the 1930s. Objects from telephones to ocean liners were designed to be unified in appearance instead of collections of parts. Curves replaced square corners, and horizontal lines replaced verticals.

Streamlining burst upon the railroad scene with the 1934 introduction of two sleek internal-combustion-powered passenger trains. Steam was still king, so railroads desiring a modern image applied streamlined styling to existing and new steam locomotives. The benefits were mostly aesthetic, but increased efficiency through reduction of wind resistance was also a factor.

More than two dozen North American railroads fielded steam locomotives that were streamlined to some degree. Here are 12 of the most notable ones.

One thought on “Streamlined steam locomotives”