The excitement created by Union Pacific when it brought Big Boy no. 4014 back to life can now reach your HO scale layout with this specially detailed locomotive model from Trix, the two-rail, DC subsidiary of Märklin.

All of the Big Boys, also known as 4000s due to their number series (4000-4024), were coal-burners except one, no. 4005, which was refitted to burn bunker C in 1946. It proved to have such a voracious appetite for the heavy oil that it was impractical to switch the locomotives to oil burning. Of course, the rebuilt no. 4014 burns oil like its other steam program mates.

Of the 25 locomotives, eight were preserved. In 2012, Union Pacific (UP) indicated it was considering returning a Big Boy to the rails, and in 2013, UP arranged a trade with the Southern California Chapter of the Railway & Locomotive Historical Society, sending a diesel locomotive and caboose to the RailGiants Museum in exchange for no. 4014.

In spring 2014, UP moved the locomotive from Southern California to Cheyenne, Wyo., with numerous stops for fans to see the locomotive. The staff of Trains magazine recorded the event.

Work on the restoration of no. 4014 kicked into high gear in 2016, and by the spring of 2019, no. 4014 was ready to return to the limelight. The summer and fall found no. 4014 touring across the Upper Midwest and the Southwest, to the delight of millions of railfans.

The model. Trix didn’t just renumber its Big Boy model, first released nearly 20 years ago (Andy Sperandeo reviewed the model in the April 2002 MR); it made more than a dozen changes to the model.

The most obvious change is the oil-burning tender. Märklin also revised the front of the tender to replicate the modified prototype, added steps to the rear of the tank to ease filling its water tank, and added the train control box to the engineer’s (right) side of the tender.

On the locomotive, the ash pan was removed as on the prototype, as were the handwheels for emptying the ash pans. Inside the cab, the backhead has been modified to reflect changes made in the restoration, and the large UP 4014 logo on the cab floor has been replicated. The large cab windows and interior lighting make this easy to see.

On the cab roof, a blade-type radio antenna has been added, and a second turbogenerator stands next to the original, as the restored engine has higher electrical power needs than the 1940s originals did.

Märklin also updated the location of steam lines and painted the bearing caps silver. To match the prototype, the steam blowoff valves are turned brass.

The final touch is the “Big Boy” lettering on the smoke box door.

As Andy said in his 2002 review, all of the model’s dimensions are within scale inches of published drawings, except the driver diameter, which scales 631⁄2″ instead of 68″.

This is common on model steam locomotives, as the larger flanges on the model mean either the wheel diameter has to get smaller or the wheelbase between drivers has to get larger. Märklin chose to make the wheelbase accurate. Andy’s note about the eccentric cranks on the left side has been addressed; they now lean forward at bottom dead center.

The die-cast boiler and tender shell are sharply molded, and the numerous metal and plastic detail parts make for a satisfyingly busy appearance. The paint is smooth and opaque, with sharp color separations between the black boiler and graphite-colored smokebox and firebox. The lettering is sharp and legible.

Under the shell. We don’t usually disassemble steam locomotives, as they tend to go back together poorly, but this model is an exception. Popping off the steam dome and the round foam-collapsing muffler ahead of the cab reveals two screws. I removed those, and the die-cast metal boiler lifted off easily.

Inside is a die-cast metal frame and a mostly concealed can motor, flywheels, and other drive gear. A sound decoder is mounted to a motherboard with a 21-pin connector. At the front of the frame are contacts for optional, user-installed smoke generators (Märklin no. 7226).

The tender is equally easy to open, with a single screw hidden under the first water hatch behind the fuel bunker. Inside are an enclosed speaker and electronics for the backup light. The tender shell and frame are also die-cast metal.

Clever engineering continues with the chassis design, which allows the locomotive to negotiate a claimed 14 3/16″ minimum radius. I don’t have access to any curves that tight, but the engine easily negotiated compound yard ladders made up of Atlas no. 4 turnouts on my home switching layout. Overhang is significant, though. 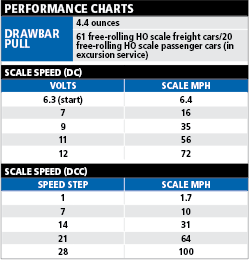 On the test track. I started testing with my NCE PowerCab. At speed step 1, the engine crawled along at 1.7 scale mph. At speed step 28, it hustled down the track at 100 scale mph, about 20 scale mph faster than most engineers were willing to run the full-sized locomotive.

The Trix Big Boy exerted 4.4 ounces of drawbar pull, enough to pull 61 free-rolling freight cars or 20 passenger cars on a straight and level surface. On our staff layout, the Milwaukee, Racine & Troy, the Big Boy clawed its way up a 3 percent curving grade with 15 50-foot boxcars on its tail.

The locomotive’s DCC-compatible sound decoder is designed to operate on Märklin’s mfx system and Märklin Motorola systems. The function buttons are arranged differently than most U.S.-market systems. The headlight is still Function (F) 0 and the whistle is set to F2, but the bell is at F9, while F1 turns on the locomotive sounds. A grade-crossing sequence is available at F10. A short whistle is at F7, labeled “switching whistle” in the instruction booklet.

On DC power, there are no sound effects. The headlight came on at a little over 4V, and the locomotive started moving at 6.3V at just over 6 scale mph. Speed at 12V was 72 scale mph, and reached 95 scale mph at my power pack’s maximum output of 13V.

The Trix Big Boy 4014 brings back the excitement of standing trackside to see the huge locomotive rush by. The high level of detail and quality of the model makes this a top contender if you’re a fan of present-day railroading. The wooden presentation case and display panel make this a top choice for collectors, as well.