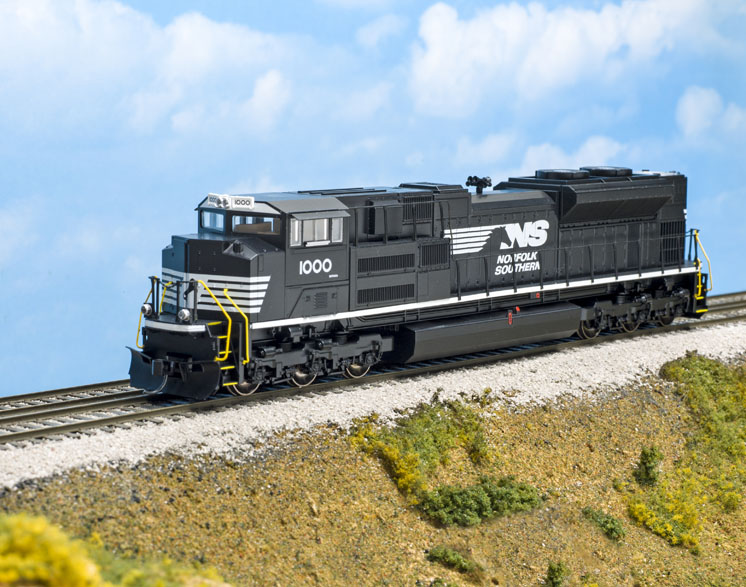 A modern-era mainstay, the SD70ACe diesel-electric locomotive is back on HO scale rails from Wm. K. Walthers Inc. in a selection of new prototypical road names and paint schemes from Walthers Trains. First reviewed in the June 2016 Model Railroader, the HO scale locomotive is part of the value-priced WathersMainline series. New for 2018, the Digital Command Control (DCC) version of the SD70ACe features an ESU Sound & DCC dual-mode decoder.

The prototype. In 2004 General Motors Electro-Motive Division unveiled the SD70ACe, an updated version of the EMD SD70MAC. The SD70ACe was built to comply with the Environmental Protection Agency’s strict Tier II emissions standards. The heart of the locomotive is the 4,300 hp 16-710G3C-2 diesel engine, which produces 10 percent more horsepower and 50 percent less emissions than a previous 710-series engine.

Electro-Motive Division (Electro-Motive Diesel after 2005) built nearly 1,900 SD70ACes for railroads in North America and Mexico. Most remain in service, although in 2015 EMD replaced the SD70ACe in its product line with the EPA Tier 4-compliant SD70ACe-T4. 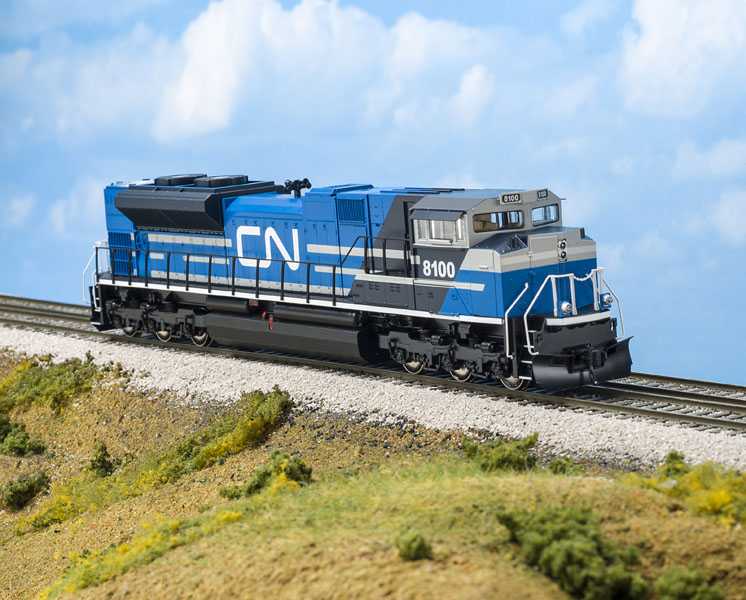 WalthersMainline HO scale Canadian National SD70ACe
The model. Built with the same tooling as the 2016 release, the WalthersMainline SD70ACe matches prototype drawings published in the November 2004 Model Railroader. Engine-access doors, grills, and other details are well defined on the injection-molded plastic body shell. The placement of details matches prototype drawings and photos. The locomotive headlight is high- or low-mounted depending upon the prototype.

Like other WalthersMainline models, the SD70ACe has a modest amount of separately applied details. Separate parts include cab sunshades and a five-chime air horn. The handrails and stanchions are made of flexible engineering plastic that resists breaking.

For those who wish to further detail the model, the body shell features drill starter points for the grab irons. Walthers sells a separate detail kit for $11.98. 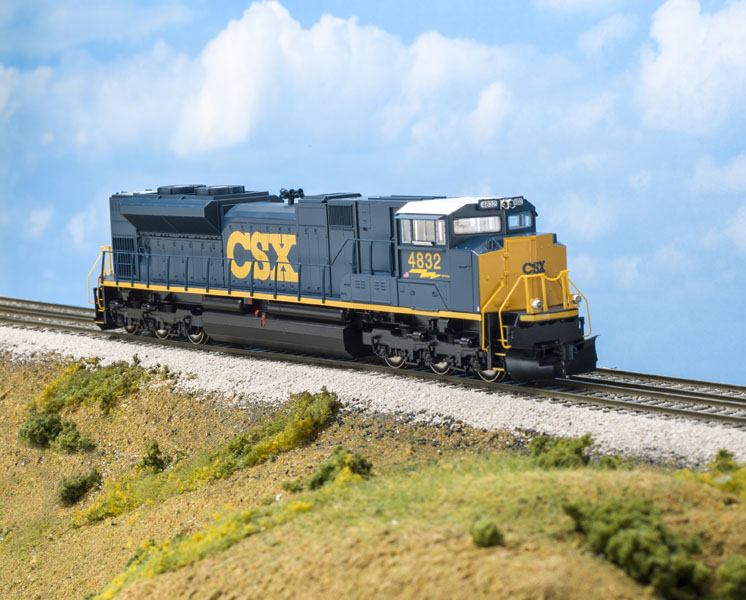 All the windows have clear plastic glazing. The cab interior includes seats and control panel details, but no crew figures. The cab window frames are painted silver for a more realistic appearance.

Mechanism. After removing the coupler draft-gear boxes, I removed two additional screws on the underframe, one on each end of the fuel tank. I could then easily lift off the body shell.

The WalthersMainline SD70ACe uses the same mechanism as a top-of-the-line WalthersProto locomotive. Resting in the center of the die-cast metal chassis, a dual-flywheel-equipped can motor transfers power to all six axles via truck-mounted gearboxes. A key feature of the Walthers mechanism is that it uses helical gears whose teeth are angled instead of straight across. Helical gearing offers extremely smooth performance that’s especially noticeable at low speeds. Gear noise is also virtually eliminated. 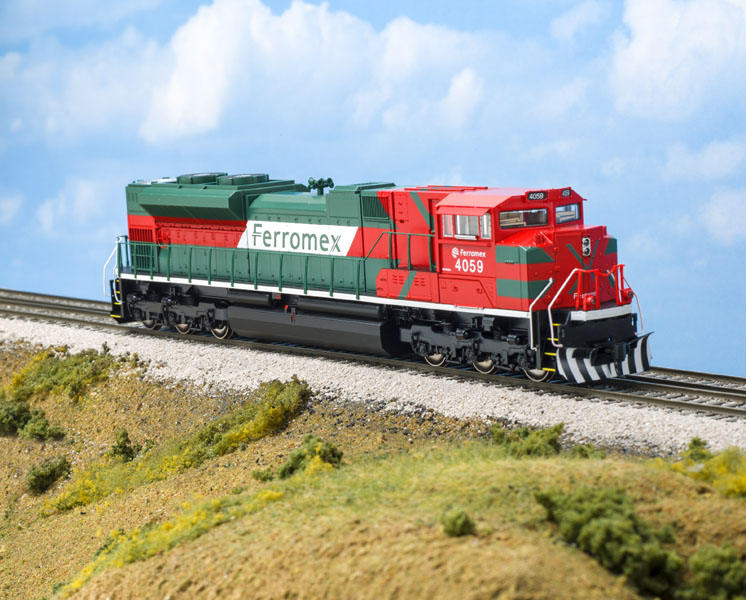 On our DCC-equipped review sample, the decoder is plugged into a 21-pin socket on a motherboard that’s attached to the chassis above the motor. Leads run from the motherboard to light-emitting diodes (LEDs) that illuminate the front and rear headlights as well as the ditch lights. A speaker is mounted above the rear truck.

Performance. The heavy frame, powerful mechanism, and all-wheel drive make the WalthersMainline SD70ACe a capable puller. The locomotive’s 5-ounce drawbar pull is equivalent to 70 free-rolling HO scale freight cars on straight and level track. On our hill climb test, the model pulled a 14-car freight train up a 3 percent grade.

The locomotive performed well on both DC and DCC speed tests, the results of which are shown in the charts below. The SD70ACe rolled smoothly even at the lowest speeds without any hesitation or jerkiness. The top speed of the prototype is 75 mph, but the model’s 50 scale mph top speed in DC and 60 scale mph top speed in DCC are more than fast enough for the compressed distances of model railroad main lines. 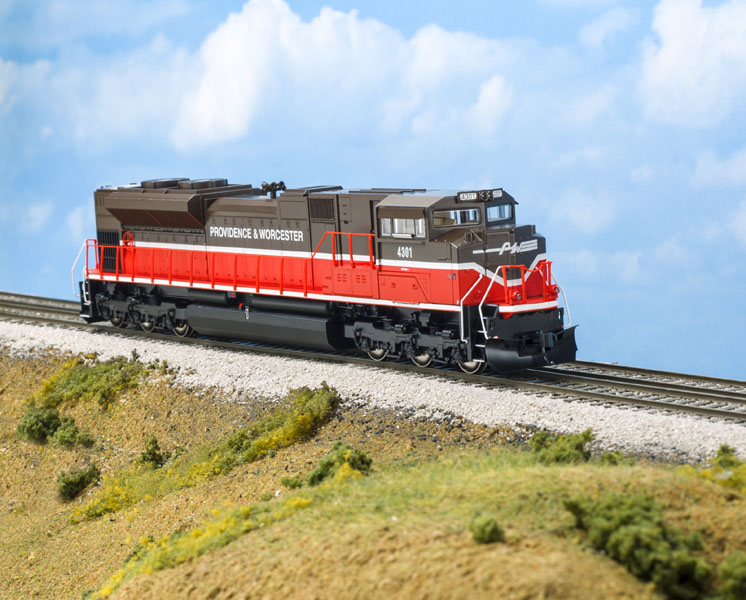 ESU Sound & DCC. Although the new ESU Sound & DCC decoder isn’t a full-featured LokSound decoder, it does provide the same excellent sound quality. The ESU Sound & DCC decoder accurately reproduces the sounds of the prototype, including the 710-series engine. There are also three air horns and two bells to choose from. The default Nathan K5HL air horn and Graham-White E-bell sounded correct to me.

In addition to the air horn and bell, user-triggered DCC features include the headlights, ditch lights, coupler crash, compressor, and an engine start-up sequence. When the SD70ACe led our test train downgrade, I pressed function 4 to trigger a realistic dynamic brake sequence.

The DRIVE/HOLD function is my favorite feature of the ESU Full Throttle diesel effects package, and I was happy to see it included in this ESU Sound & DCC decoder. With this effect, I could press function 9 to keep the locomotive speed constant while using the throttle knob to manually notch the engine rpm level up or down.

I changed the locomotive address to the cab number and added acceleration and deceleration momentum following the printed quick start guide included with the model. I also advance-consisted three WalthersMainline SD70ACes without any additional speed matching required.

For more programming options, a list of the decoder’s supported configuration variables (CVs) will be available at www.walthers.com. These include CVs to set up speed tables, adjust individual sound effect volume levels, and remap functions. 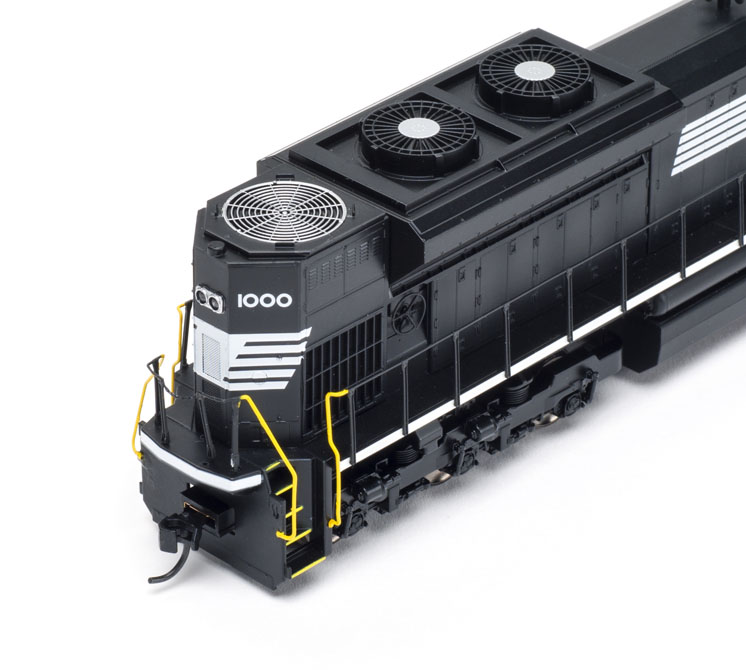 For example, I used these CVs to change the automatic, directional headlight control to independent manual control, where I use F0 for the forward light and F5 for the rear light.

Users should note that this decoder isn’t supported by the ESU LokProgrammer interface or software. However, as of this writing, a template is in the works for the free Java Model Railroad Interface (JMRI) DecoderPro programming software. To learn more, visit www.jmri.org.

DC operation. On our DC test track, the locomotive’s sounds started and the lights shone at 6.5V. The decoder’s sound effects on a DC layout are limited to the prime mover. The RPM levels increased or decreased with the throttle. Just like a real diesel-electric locomotive, the engine RPM sounds increase before the locomotive begins to move at about 8V.

In DC, the headlights and ditch lights operated automatically according to the direction of travel. In addition, the headlight realistically went from dim to bright as the locomotive started moving. 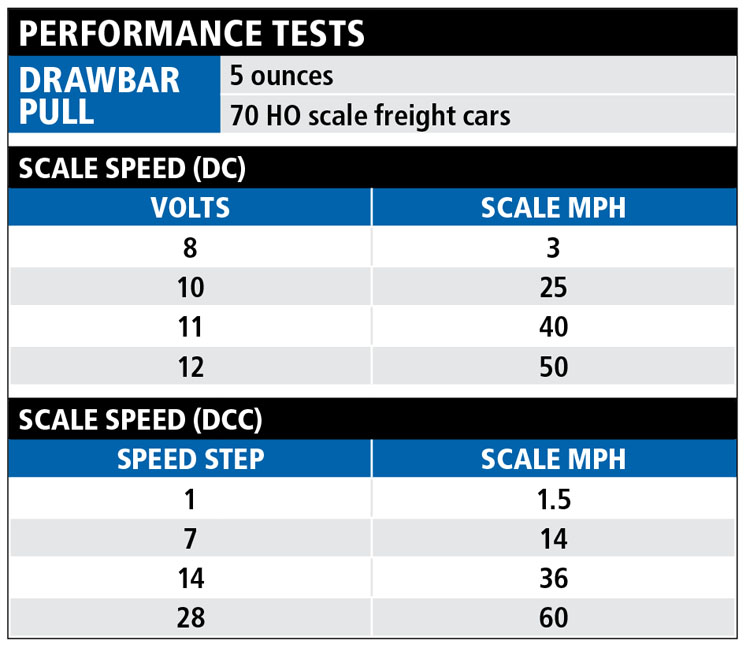