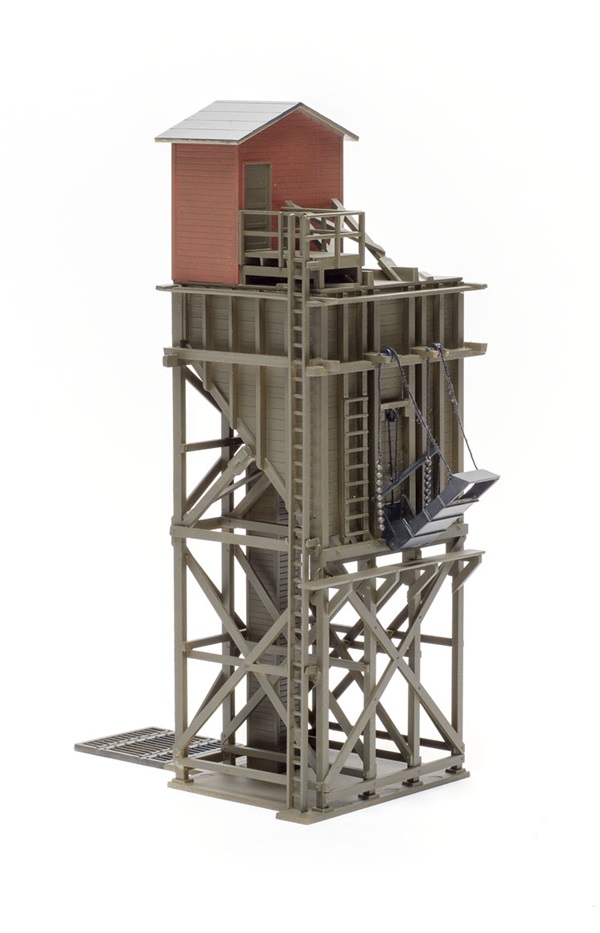 If your steam-era railroad needs a compact locomotive servicing terminal, Walthers has a new HO scale structure that will fill the bill (and your locomotive’s tender). The compact Wood Coaling Tower (item no. 933-4202) is big enough to keep a handful of steam locomotives fueled without taking up a lot of layout space. Its short height also makes it perfect for a multi-deck layout where air space might be at a premium. The kit assembles easily and precisely, forming a realistic, visually interesting structure that would look right on any steam-era model railroad.

The prototype and the model. The coal tower is quite small, being about 3″ square (not counting the unloading grate behind the tower) and standing under 8″ tall. But this isn’t a selectively compressed model; it’s based on a small prototype built by the Chicago, Burlington & Quincy at Gilman, Mo. Though the prototype was built in 1924, there’s nothing about this model that would make it out of place on a railroad set earlier in the steam era.

The tower is set up for use with two tracks: one in front for locomotives to load up with fuel, and one in back where coal hoppers dump their loads into a between-­the-rails unloading grate. If your locomotive servicing facility doesn’t have space for the unloading track, it should be easy to cut the grate off the back of the base and switch it to the front for single-track use.

Assembly. It took me about seven hours – an enjoyable day in the workshop – to assemble and paint the kit. The parts were cleanly molded, free of flash, and fit together well. My only complaint is that the isometric diagrams in the instructions show the parts in exploded form, but without any dotted lines to show where parts join. The placement of most pieces is obvious, but it took me a while to figure out where to attach some of the inner braces that were hidden at the viewing angle used in the diagrams. A diagram showing the tower from the back might have helped, too.

I deviated from the order of assembly twice. First, the instructions say to attach the window glazing at the time of assembling the head house, but since I wanted to airbrush the model, I didn’t do that until after painting. I left the roof off the head house until after adding the window glazing. Second, the holes for the thread rigging for the coal chute and door are not much larger than the thread itself. Rigging the thread can be very tricky if the parts are attached to the model. I brush-painted the door pulley (part 48) and waited until after the tower was painted to run the thread through it and attach it. (Assembly hint: Brushing cyanoacrylate adhesive on the tip of the thread stiffens it, turning it into its own needle and making it easier to push through tiny holes. White glue would do the same, but take longer to dry.)

Following the paint scheme of the completed tower depicted on the box, I airbrushed the coal tower with Testor’s Model Master Railroad Tie Brown, then brush-painted the head house Oxide Red. Metal parts like the coal chute, coal door, pulleys, and door lever I brush-painted Grimy Black. I don’t recommend painting the whole tower by hand, due to the intricate interior bracing and hard-to-reach areas. Had I noticed before assembly that the conveyor enclosure was the same siding as the head house, I would have waited to attach the tower to the base until after this interior part had been painted a matching Oxide Red.

Just the right size. This nicely engineered, finely molded, and well detailed kit built into a realistic structure that will make a great centerpiece for any small steam servicing area. It may not have the capacity to serve a busy engine terminal, but for a logging or mining line, a tourist railroad, or a station at the end of a branch, it would be just right. I already know where I’m putting it on my layout.