Reviewed in the April 2002 issue

Trix HO scale Big Boy 4-8-8-4 steam locomotive
What better way to make a big splash in the model railroad market than to introduce a top-notch model of the world’s biggest steam locomotive. Märklin introduced its Union Pacific 4-8-8-4 last year in a three-rail AC version, but most U. S. HO enthusiasts have had to wait for the two-rail DC model sold under the name of Märklin’s subsidiary, Trix. Now it’s here and fans of the Big Boy will be pleased to see it.

The names of some steam locomotives take varying degrees of explanation, but Big Boy’s is obvious. A famous photo shows that in 1941 someone at Alco’s Schenectady plant chalked “Big Boy” on the smokebox of one of these engines under construction. That was appropriate as these simple articulated 4-8-8-4s are generally acknowledged to be the largest steam locomotives ever built, even if they only exceeded the Chesapeake & Ohio 2-6-6-6 Allegheny type (see February Product Reviews) by about six feet of length.

Numbered in the 4000 series, the 25 UP 4-8-8-4s were built in 1941 and 1944 to take on the railroad’s most challenging freight run, the 176-mile Fourth Subdivision of the Wyoming Division between Green River, Wyo., and Ogden, Utah. The eastbound climb up the Wasatch Range from Ogden required plenty of tractive effort, but more level stretches called for a locomotive that could also run fast enough to keep this heavily burdened main line fluid. With a gigantic, free-steaming boiler and 68″ drivers, Big Boy developed its maximum output of 6,290 drawbar horsepower at 41.4 mph.

Ultimately the 4000s ran across the Wyoming Division to Cheyenne, including the climb over Sherman Hill where they worked out their last miles in the 1950s. The Big Boys’ last runs were made in July 1959. Seven of these legendary machines have been preserved.

The Trix HO Big Boy is largely built of die-cast metal, with numerous added parts of plastic and wire. Märklin has raised die casting to a high art and this locomotive reflects all of its builder’s expertise. The level of detail achieved on the engine and tender exceeds that of many older brass models. The model is accurately scaled to within a few inches of most major dimensions. More than 18″ long and as high and wide as a locomotive can be, the model lives up to its prototype’s moniker. 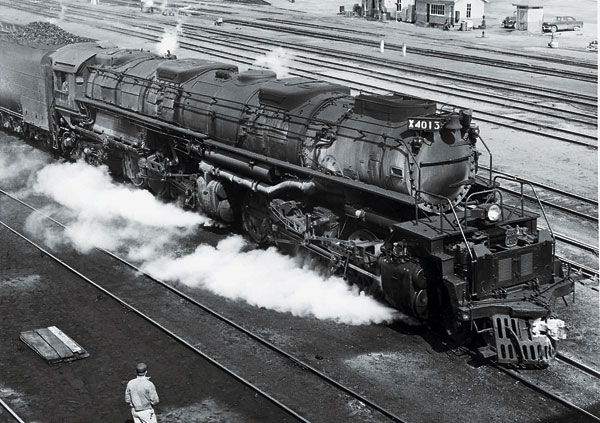 Robert Hale photographed UP 4013, the prototype of the Trix model, at work in the 1950s.
The Trix Big Boy is detailed to specifically represent engine 4013 as it appeared in the 1950s. It has a Wilson aftercooler radiator installed below the headlight and enclosed chain drives (simulated) for the mechanical lubricators on the front engine.

In common with most HO articulateds in mass production, both engine units swivel to allow the locomotive to negotiate sharp model curves. On real articulateds the rear engine was rigid and only the front engine pivoted on a hinge between the rear cylinders.

The model arrangement allows the Trix Big Boy to operate smoothly on curves as tight as 18″ radius, although with considerable overhang as the instruction booklet warns. The front engine pivots between the third and fourth drivers, and the rear engine behind the last driving axle. The tail beam under the cab pivots with the rear engine frame, and this helps minimize the offset of the trailing truck. It’s still unfortunate to see the rear cylinders so clearly disconnected from their steam delivery pipes on sharp curves.

Another major compromise on this model is the driver diameter, which is only a scale 63″ instead of the prototype’s 68″. Darkened driver tires and close-fitting brake gear help give the machinery a realistic look, and the drivers are somewhat hidden under the boiler, firebox, and running gear. Closer to scale is better, but I don’t find that the undersize wheels detract very much from the model’s appearance.

All the engine and tender wheelsets match the National Model Railroad Association standards gauge. The flanges are .025″ deep in conformance with the RP25 recommended contour.

A Big Boy detail I like to look for is missing from this model: the folding smoke deflector hood that should be inside the shroud around the twin smokestacks. Most won’t miss it, but ever since seeing it demonstrated in the documentary film Last of the Giants I’ve known it should be there.

An oddity the Big Boy shares with some other recent steam models is backward eccentric cranks on the left side. The cranks should lean forward instead of to the rear at bottom center, but the cranks are keyed to the main crankpins so changing their position wouldn’t be a trivial modification.

On the other hand I give the builder high marks for modeling the radius on the rear corners of the cab, an Alco trait that’s almost always overlooked.

The engine has an enclosed motor with a bell-shaped armature and a flywheel in the boiler above the fifth and sixth driving axles. A combination of worm and spur gears drives the rear axle of each engine, with power transmitted to the other drivers by the siderods in good steam-engine style.

The two middle driving axles on each engine are sprung to ride evenly over uneven track. The model picks up current from all drivers and all wheels of the five-axle rigid tender bed except the left rear.

This is a very sweet-running locomotive right out of the box. It’s smooth and quiet, with a good speed range and plenty of power. The model’s drawbar pull is equivalent to more than 80 free-rolling HO freight cars on straight, level track. And while the instruction booklet shows how to change a traction tire, this engine doesn’t have one!

The top of the boiler can be removed by popping off the top of the steam dome and the round foam-collapsing muffler right ahead of the cab and removing two screws. That’s about as much disassembly as the manufacturer recommends, except for snapping the roof off the cab to install the crew.

Removing the boiler gives access to the circuit board in the firebox, which includes a receptacle for a Digital Command Control (DCC) decoder as recommended by the NMRA. There’s room for a decoder measuring 5/8″ x 1 3/8″ x 7/32″, and a decoder with a plug at the very end of its circuit board could drop right in. I tested a North Coast Engineering decoder with Lenz DCC and the locomotive performed just as sweetly as on conventional power. Function 0 controlled the headlights and illuminated train indicators, and the latter are much more effective with the constant brightness allowed by DCC. 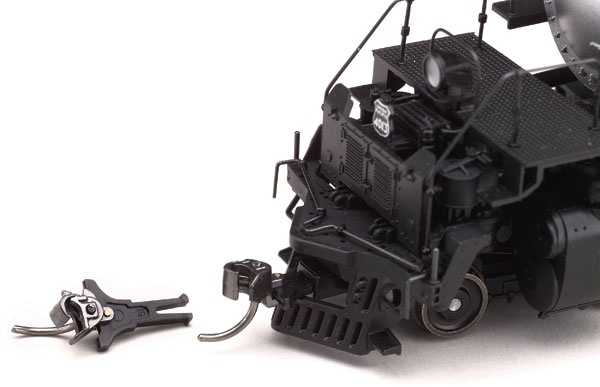 The locomotive comes with European standard NEM 362 coupler pockets at both ends and a Kadee no. 18 installed on the tender. A no. 19 swallowtail coupler (not included) snaps into the front pocket. Or you can use either gate for the look of a closed pilot (both included). The front and rear coupler heights match the Kadee height gauge.

There doesn’t seem to be an easy way to disconnect the locomotive and tender without disassembling the tender, which I didn’t try. They drawbar is the variable type that lets the tender ride close behind the cab on straight track and extends on curves. Märklin’s Web site says a tender-mounted sound system will be available later.

With smoothness, power, fine detail, and high degree of finish, the Trix Big Boy should be a hit in this country. I hope this will lead Märklin to produce other American steam models of this excellence.