Read this review from the November 2016 Model Railroader 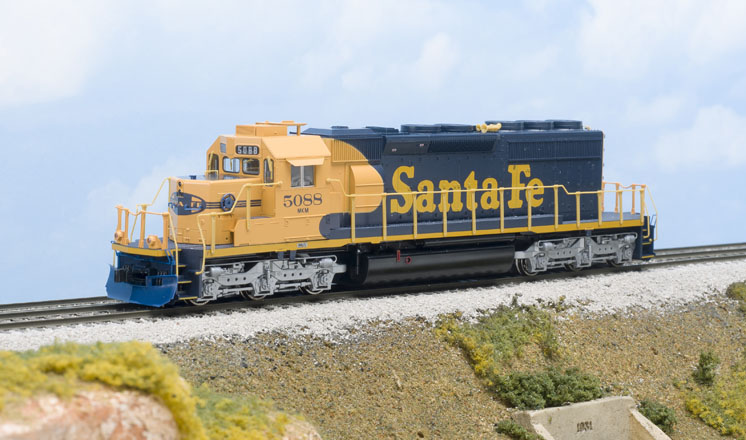 All the detail parts, including grab irons and windshield wipers, are factory applied on the Kato HO scale mid-production SD40-2. 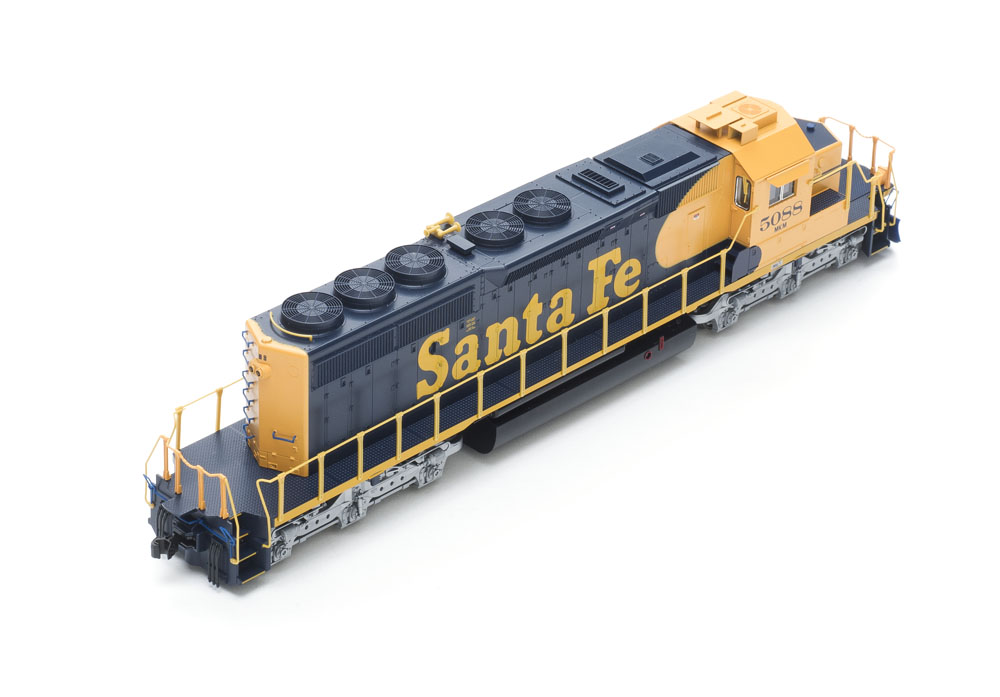 The Kato mid-production Electro-Motive Division SD40-2 features notable enhancements over the early-production SD40-2 reviewed in our August 1999 issue. Instead of supplying sprues of grab irons and other parts, Kato factory-installed the details on this model. The direct-current (DC) version we tested also features new user-controlled ditch lights. A version with factory-installed DCC sound is also available.

Like the SD40 that came before it, the SD40-2 has a turbocharged 16-cylinder 645E 3,000 hp diesel engine. As part of EMD’s “Dash 2” product line, the SD40-2 featured some key improvements over its SD40 predecessor, including HT-C high-adhesion trucks and easier-to-maintain modular electrical components.

Even after decades of service, many of these second-generation diesel workhorses still haul freight today.

The model. The model’s dimensions match drawings in the Model Railroader Cyclopedia: Vol. 2, Diesel Locomotives (Kalmbach Publishing Co., out of print). The Kato model is of a mid-production SD40-2, like the prototype for our review sample Atchison, Topeka & Santa Fe Ry. no. 5088. Built in 1979, that locomotive was one of 172 SD40-2s delivered to ATSF between 1977 and 1981.

Past releases of Kato locomotives required the modeler to do a fair amount of work installing detail parts. I’ve lost my fair share of Kato windshield wipers. With all the parts factory-installed on the new SD40-2, I didn’t have to take out my tweezers once.

The appearance of no. 5088 changed over its career, including horn placement, the addition or removal of a rooftop strobe, and other details. According to prototype photos, the Kato model depicts no. 5088 in the early 1990s with a nose-mounted headlight, the airhorn mounted at the rear of the dynamic brake fan housing, and the correct air-conditioning equipment and antennae mounted on the cab roof. The class lights on the short hood had also been plated over at this time.

The model is decorated as it appeared in the 1990s, including the MKM lettering on the cab. While Santa Fe did sell some locomotives to Morrison-Knudsen and lease them back, the railroad retained ownership of its SD40-2s. On the SD40-2 fleet the MKM lettering denotes that a locomotive is covered under a maintenance contract with the firm.

The locomotive’s mechanism rests in the center of a die-cast metal frame. Removing the dummy board reveals an 8-pin socket for a decoder.

Mechanism. After removing the couplers, I squeezed the sides of the body shell inward to release the locking tabs along the sill. I then lifted off the shell.

The dual-flywheel-equipped motor is in the center of the die-cast metal chassis. Universal joints send power from the motor to the truck-mounted gearboxes.

Two screws attach a printed-circuit (PC) board to the top of the motor. Removing a dummy board on top of the PC board reveals an 8-pin Digital Command Control decoder socket. A sound system could be easily added, as there’s a built-in speaker enclosure with sound holes in the fuel tank. A version with a factory-equipped ESU LokSound Select decoder and speaker is also available.

There are four light-emitting diodes (LEDs) on the PC board: one on each end for the front and rear headlights and two on the front of the board for the ditch lights. Plastic light pipes direct the illumination to the appropriate lenses in the body shell.

Performance. The Kato locomotive rolled smoothly throughout its speed range from 2 scale mph to 93 scale mph. The prototype could reach 76 mph.

The trucks swiveled freely, and the model easily negotiated 18″ radius curves and no. 5 turnouts.

Lighting on the model is directional. In forward the front headlight, numberboards, and ditch lights illuminate. In reverse these lights turn off and the rear headlight shines.

While the locomotive moved forward, I triggered the alternately flashing ditch lights by quickly flipping the direction switch on the DC power pack. I quickly flipped the switch again, and both lights shone steadily.

The Kato mid-production SD40-2 is worth a look for modelers who want to add motive power to a layout set in the late 1970s to the present day. 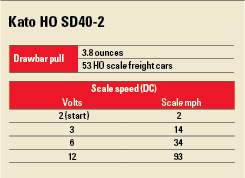