Read this review from the February 2017 Model Railroader 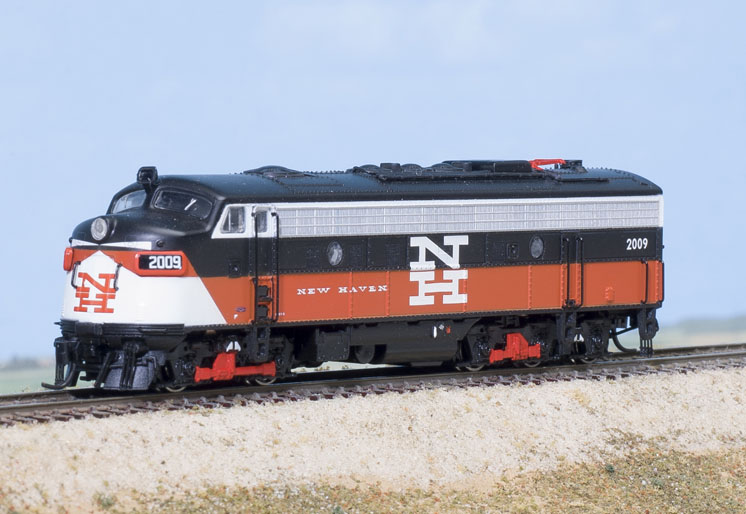 A split die-cast metal frame surrounds the motor and flywheels. Driveshafts transfer power to the trucks, driving four of the five axles, just like the prototype.

N scale modelers who want to model commuter operations on the New York, New Haven & Hartford don’t have to pine for the HO scale Electro-Motive Division FL9 any longer. Rapido Trains has them covered.

The prototype. New Haven’s FL9 was an odd duck. It was designed to accommodate two unique needs: the ability to run on electric power in Manhattan’s Grand Central Terminal, and meeting the weight restrictions on the Park Avenue Viaduct leading to the terminal. This resulted in a longer frame than a standard F9, and a combination of a four-wheel and a six-wheel truck, both with third-rail pickup shoes. For more about the FL9, see my review of Rapido’s HO scale model in the February 2016 Model Railroader.

The model. Rapido’s N scale FL9 matches drawings of the locomotive in Model Railroader Cyclopedia: Vol. 2, Diesel Locomotives by Bob Hayden (Kalmbach Publishing, out of print). Our sample, decorated as New Haven no. 2009, is accurately painted in the McGinnis-era scheme of black, white, and red-orange.

Color separation on the nose is a little fuzzy, but all lettering is sharp and opaque. Detail painting includes the stainless steel grills on the body sides and window trim on the cab side windows, m.u. doors at the top of the nose, and EMD builder’s plates. Rapido includes decals for all 60 of the possible road numbers.

Grab irons on the sides of the locomotive are formed wire, and the ladder on the back is engineering plastic, as are the m.u. hoses and uncoupling levers on the front and back of the model. The third-rail apparatus is separately applied to the trucks. The center axle on the rear truck is an idler, just as on the prototype. The four driven axles also pick up power from the track.

On sound-equipped locomotives like our sample, a printed-circuit board and an ESU Select Micro Digital Command Control (DCC) decoder are secured to the top of the die-cast frame with tape. A downward-facing speaker is mounted above the rear truck. Surface-mount light-emitting diodes are attached at the ends of the chassis facing up, where they shine into light tubes that conduct the illumination to the headlight and back-up light. The cab interior casting snaps into the side glazing. It can be removed to add crew figures.

On the test track. Out of the box, the model had a stutter in speed step 1 when I tested it using an NCE Powercab DCC system. I increased starting voltage by changing configuration variable (CV) 2 to a value of 10. That smoothed performance considerably.

Rapido recommends what it calls “Awesome Slow Speed Thingy,” which tunes the decoder’s back-electromotive force control to the model’s motor. Using programming on the main, I set CV 54 to a value of 0, then switched out of programming mode and pressed function 1, the bell. The locomotive took off for about 2 feet, then came to a stop with its bell ringing.

After turning off the bell, I retested the locomotive’s speed performance. Speed in speed step 1 fell from 5.5 scale mph to 3.9 scale mph. Midpoint speed in step 14 dropped from 51 to 35 scale mph. Top speed in step 28 fell slightly from 108 to 102 scale mph.

The locomotive had a drawbar pull of .64 ounce, equivalent to seven N scale passenger cars or 14 N scale freight cars. I took the locomotive to Model Railroader’s Salt Lake Route project layout to put it through its paces. With the tuned decoder settings, the FL9 operated smoothly. I had no trouble navigating through the double crossover or any of the other Kato Unitrack sections on the layout.

The ESU Loksound Micro decoder realistically revved the diesel engine sound before the locomotive started to move. Factory-programmed momentum gave the illusion of great mass. The momentum and many other aspects of the locomotive performance can be further adjusted via CVs. A free user guide is available at www.rapidotrains.com.

Features such as “straight to eight,” which simulates the full power application commuter locomotive engineers used on their busy routes, and Grand Central Terminal mode, which simulates the transition from diesel-electric propulsion to straight electric, add realism to operating scenarios.

With its feature-laden sound decoder and paint-scheme specific detailing, Rapido has a fully realized N scale model of an iconic locomotive. All those features make it easy to add authentic commuter operations to a model railroad, and this model will make that an enjoyable experience. 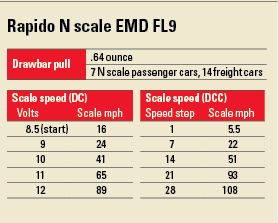