Read this review from the January 2019 Model Railroader 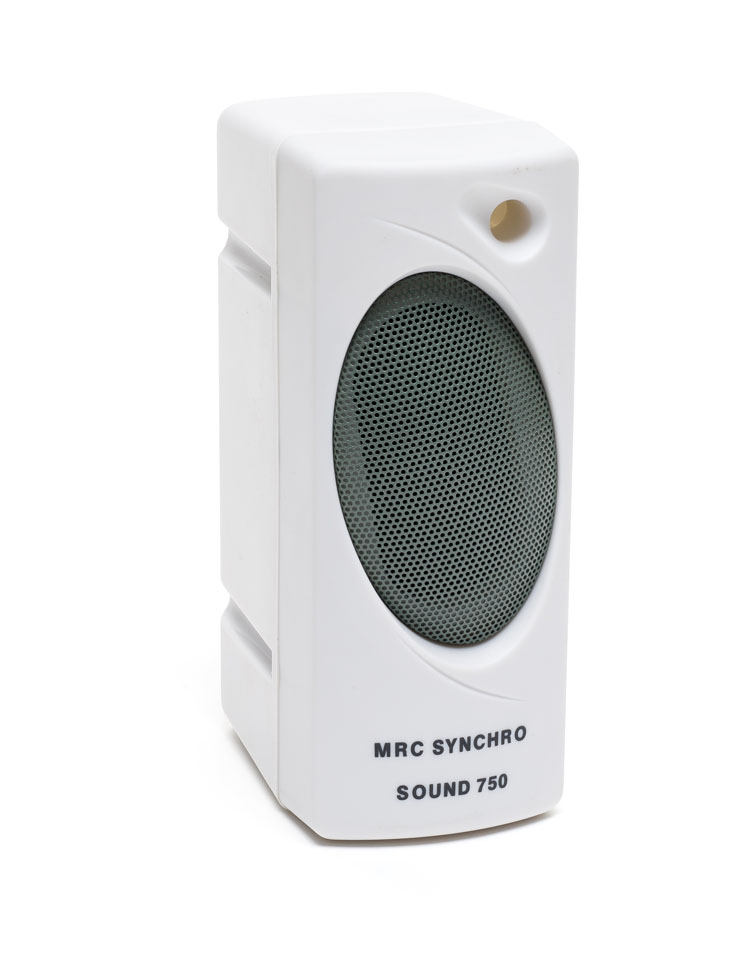 To get truly big sound out of your Digital Command Control-equipped locomotive, you need a big speaker. Unfortunately, that’s just not possible in smaller scales. Model Rectifier Corp. has addressed this problem with the Synchro Sound2, a standalone speaker equipped with a DCC sound decoder. The Synchro Sound2 is meant to be consisted with a diesel locomotive that has a motor-only DCC decoder.

When you first take the Synchro Sound2 out of the box, you might wonder at first if something is missing. It’s just a plastic speaker enclosure with a single wire coming out the back, like you might hook up to your desktop computer. But that’s because everything is inside the enclosure. Just attach the wires to your DCC layout’s track bus, and you’re ready to go.

The device supports the sounds of a single locomotive at a time. However, the speaker’s decoder can be advance consisted, so you can operate it with a multiple-unit lashup.

I hooked up the Synchro Sound2 to our workshop test track, which is powered by an NCE Power Cab. Out of the box, the decoder responds to DCC address 3, just like a new locomotive decoder. Since it’s a standalone device, I could test its sound functions before consisting it with a locomotive.

The first thing one notices is that the sound emanating from its 11⁄2 x 3-inch speaker is much deeper and richer than you’d expect from an onboard sound decoder. It was much louder, too.

One feature curiously missing from the Synchro Sound2 is a volume knob. The volume of each sound effect can be controlled via its assigned configuration variable (CV), but there are a lot of sound effects, and only three – diesel engine, bell, and horn – are controllable via function keys. There isn’t even a master volume CV on the decoder, so changing the overall volume entails a lot of programming.

The decoder comes programmed with four sound collections– three generations of Electro-Motive Division diesel engines, plus one Alco. Four may not sound like a lot, but they cover a wide range of popular diesels. The diesel sounds can be changed on the fly with function key F12 on a DCC throttle, so customizing the sound for a different engine is a breeze. There are also eight types of bell sounds and 34 different horns, also selectable by function key. There’s no list of which horn is which, though, so you’ll have to play it by ear when selecting which is appropriate for your particular locomotive.

Next, I programmed the decoder’s address to that of an EMD GP38 from our Wisconsin & Southern layout, and placed the GP38 on the track. The Synchro Sound2 responded just as an onboard sound decoder would as I ran the locomotive, notching the engine sounds up and down with the throttle, playing a brake squeal as I quickly cut the speed, and playing other sounds as I triggered them with function keys. (The Synchro Sound2 also supports manual engine notching, for those who prefer it.)

I then added another GP38 to the test track and tested advanced consisting. By programming a two-digit consist address into Configuration Variable 19 on the decoders of both locomotives as well as the Synchro Sound2, I was able to run both locomotives in synch with the sounds from the speaker.

Big sound for any diesel. The Synchro Sound2 seems best suited for layouts where the speaker can be installed near a fixed operator location. It could be disconcerting to walk away from the source of the sound while following one’s locomotive around a larger layout.

The MRC Synchro Sound2 is a great solution for modelers who want to add sound to a DCC layout without the expense of equipping a large locomotive fleet with sound decoders. It also seems like the perfect answer for locomotives that don’t have room for speakers.