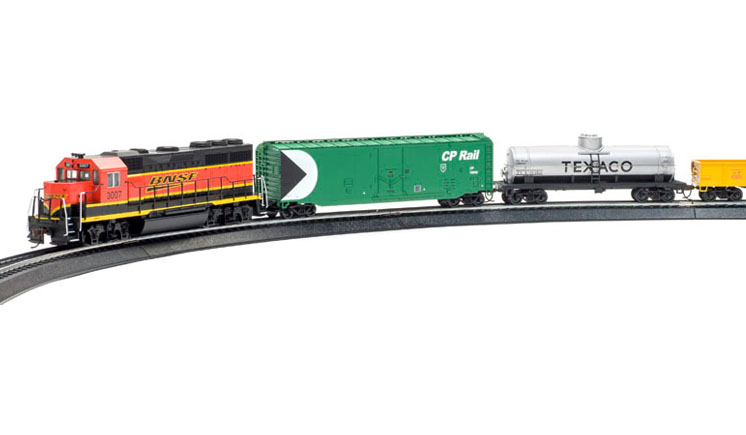 Menards exclusive Rocket Freight train set is led by a Bachmann HO scale GP40-2R diesel.
Many of us got our start in the hobby with a train set like the new Bachmann HO scale Rocket Freight set, with its sturdy diesel locomotive, colorful cars, and oval of snap-together track. This set includes everything a new model railroader needs to get started, including a direct-current locomotive, four cars, track, power pack, and an assortment of plastic figures and details. The set is sold exclusively through Menards, a home-improvement store chain in the Midwest (menards.com/trains). Menards offers free in-store pickup or delivery to areas without a local store.

The locomotive. The engine is an Electro-Motive Division GP40, a popular locomotive owned by railroads all over the United States, Canada, and Mexico. More than 1,200 were built between November 1965 and December 1971, and long after their initial mainline service was done, many were relegated to yard or branchline service or sold to secondary lines. Some were later rebuilt to upgrade their control systems to the new Dash-2 solid-state electronics, giving them the designation GP40-2R. One such was Chicago, Burlington & Quincy no. 630, which many years and two mergers later would be renumbered BNSF Ry. no. 3007. The locomotive is still in use today, now bearing the black-and-orange livery and BNSF “Swoosh” logo adopted in 2005.

The model’s dimensions matched those on a drawing published in the 1970 Car & Locomotive Cyclopedia (Simmons-Boardman), as did the overall appearance and the location of details like grills and hood doors. Grab irons were missing, but these could be added by a modeler. The model’s paint scheme matched prototype photos of other BNSF Ry. GP40-2Rs from the same number series, though the orange on the model was a shade redder than that seen on the prototypes.

I ran the locomotive on our test track, powered by the power pack that came with the set. The locomotive started moving at a fairly speedy 8.5 scale mph when the voltage topped 3V. At 12V, it ran at 84 scale mph, close to the 83 mph top speed of the prototype’s highest gearing. The front and rear headlights illuminated when the locomotive was traveling in that direction.

The locomotive was a solid puller, mustering 2.7 ounces of drawbar force, enough to pull a train of 38 free-rolling 40-foot freight cars.

I pried off the press-fit fuel tank cover to expose the two screws that held on the one-piece molded body shell. The interior was mostly filled with die-cast metal frame and weights. An enclosed can motor and twin driveshafts connecting it to the trucks’ gear towers were visible in gaps between the weights. The frame was topped with a lighting printed-­circuit board. Though there was a hole in the bottom of the frame that looked like it was intended for a speaker, there was no space in the upper frame for installation of a Digital Command Control decoder. Installing one will require soldering skills and some frame milling.

The train set includes: 12 sections 18″ radius curved track, two sections straight track, GP40-2R locomotive, three freight cars, and caboose, power pack and power cable, 12 figures, 12 line poles, 12 road signs, and 12 railroad signs
The cars. The caboose is a former “Zephyr style” Chicago, Burlington & Quincy class NE-12, built in the railroad’s Havelock shops in two batches in 1954 and 1960. It’s not likely one would have survived in service until the “Swoosh” was introduced. But if an enterprising modeler wanted to plate over the empty windows with sheet styrene, it would make a convincing shoving platform.

The freight cars are an interesting assortment of types and eras. The 50-foot plug-door newsprint boxcar bears a built date of 1-75, but has running boards, which were eliminated from new cars in 1966. The Texaco riveted single-dome tank car was built in 1937 and would have been retired before the GP40-2R came along. And 41-foot gondola no. 65263 was on the Union Pacific roster in 1954, but gone by 1990.

The caboose and freight cars are all made of sturdy injection-molded plastic that should stand up to plenty of running, but still bear fine molded rivet detail, separately applied brake wheels, crisp printing, and magnetic knuckle couplers. All the wheels on the cars – one-piece molded engineering plastic – were in gauge, and the couplers were mounted at the correct height.

And the rest. The train set comes with 14 pieces of Bachmann steel-rail E-Z Track – a dozen 30-degree, 18″ radius curves; one 9″ straight terminal/rerailer; and one matching 9″ straight section. The track is attached to black plastic roadbed that snaps together and separates easily. Bachmann sells a large assortment of matching E-Z Track components, including crossings and turnouts, so the simple oval in this set can be the start of a more elaborate layout.

The power pack is a one-knob, no-frills model (part no. 44211) issued with all Bachmann’s train sets. It has a smooth-turning throttle knob, a direction switch, and a power indicator light. It comes with a 16V wall-wart power supply and a 40-inch long cable that plugs into the power pack and the terminal rerailer to power the track.

The set is completed by three packets of accessories to help transform your Plywood Pacific into something better resembling a model railroad. These are 12 brown plastic line poles; two sprues of traffic and railroad signs (such as “Yard Limit” and “Resume Speed”); and two sprues of figures appropriate for a passenger station scene. Once severed from their bases, trimmed of flash, and carefully painted, the 12 nicely molded figures would look pretty good.

A good starting point. Opening the box and unpacking Bachmann’s Rocket Freight train set took me back to my parents’ basement in Connecticut and the HO scale Chessie set that was my first experience with model railroading. Though those who consider themselves Serious Model Railroaders may scoff at the molded-on grab irons, basic direct-current can motor, plastic wheelsets, and snap-together sectional track in a set like this, to a youngster it could be the first step on the hobby of a lifetime. With everything in this box, a future model railroader could be set up and running a train inside of 15 minutes. If they’re lucky, it’s only the beginning. 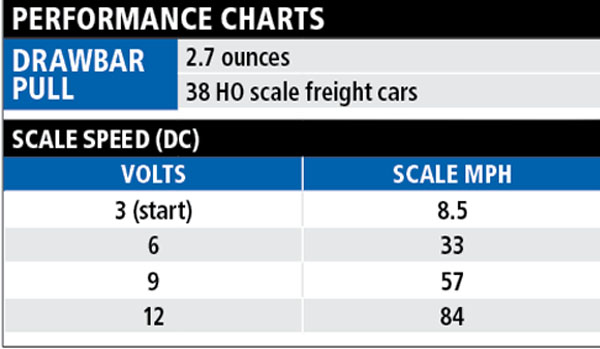