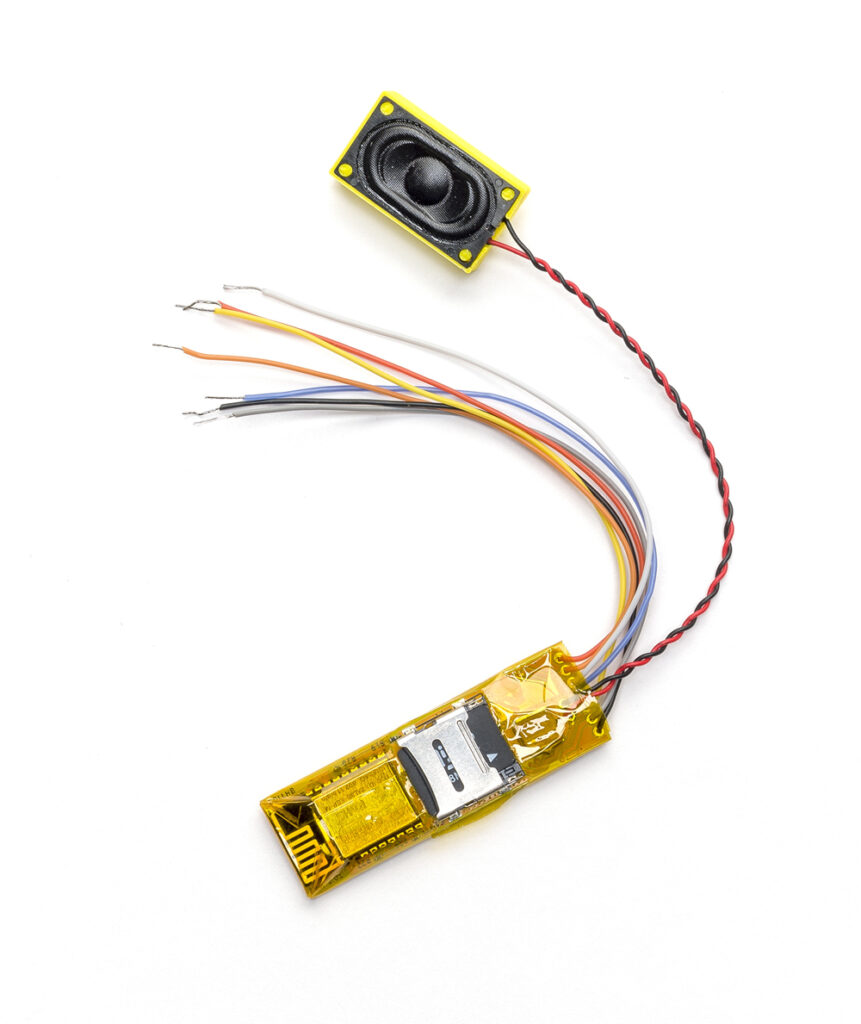 LocoFi 2 WiFi module: Not to be confused with Digital Command Control, LocoFi, developed by WiFi Model Railroad, uses a Wi-Fi signal and virtual throttles to run trains. Each locomotive is equipped with a module that transmits a unique Wi-Fi signal. Aside from a source of clean direct current or Digital Command Control track power (9 to 24V) and a smartphone or tablet for the app, no other components are needed.

I reviewed the first-generation LocoFi module and app in the March 2019 issue. WiFi Model Railroad recently released a second-generation, more compact module and updated the app. Using a Kato USA DCC-ready GP35 as a test bed, as well as our previous LocoFi-equipped Bachmann GP7, I put the LocoFi 2 board and the new app through its paces.

Installing the module is comparable to installing a wired DCC decoder. Some proficiency with soldering is required.

After removing the factory light board from the GP35, I installed the LocoFi 2 module. Most of the wiring follows DCC convention: red and black wires for the power pickups and orange and gray wires for the motor leads.

However, it’s important to note that the lighting outputs are opposite to National Model Railroad Association Recommended Practice 9.1.1. Where on most DCC decoders, the common (blue) wire is positive and the front headlight (white) and rear headlight (yellow) are negative, on the LocoFi module these are reversed – blue is negative and white and yellow are positive. This is also why a LocoFi module can’t simply be plugged into a DCC socket on a light board.

That said, installation was straightforward, and I appreciated its smaller size, especially its narrower width. The module’s 3.3V lighting outputs feature built-in resistors, so I reused the Kato Geep’s LEDs by removing them from the light board. I trimmed the plastic light tubes and removed a weight to better accommodate the module and speaker. Using clear parts cement and electrical tape I then attached the LEDs behind the trimmed light tubes.

Running trains. The LocoFi App is available for Android devices on Google Play. An Apple iOS version is in development. The app can also wirelessly update the locomotive’s firmware for free without having to remove any hardware.

A single smart device can control one LocoFi-equipped locomotive without the need of an external Wi-Fi network. To access multiple LocoFi modules from a single device requires connecting to an external Wi-Fi network, making sure its security settings allow other devices to be added to it, and then adding the LocoFi modules to that network via the app. You can then control the locomotives one at a time with the virtual throttle. As of this writing, consisting locomotives for multiple-unit operation is still in development.

The latest version of the app lays the groundwork for consisting with a new settings screen. In addition to number of speed steps, maximum/minimum speeds, and a built in speed calculator. These settings can all be used to speed match locomotives. This process and other tips for using LocoFi are available in free videos at wifimodelrailroad.com.

The setting screen also has options for turning on directional headlights, reversing the headlight direction, and changing locomotive direction.

The throttle screen is the same as the previous release and includes a throttle, engine start/stop, front and rear headlights, and direction. Horn and bell icons trigger those effects.

The module includes generic sounds loaded onto its microSD card. There’s no sound library available, but instructions are provided for those who wish to add custom .mp4 sound files.

LocoFi continues to be an intriguing option to running locomotives independently without the need of an external command control system. I’m looking forward to future developments, especially consisting, from this promising new technology.