Read this review from the September 2017 Model Railroader 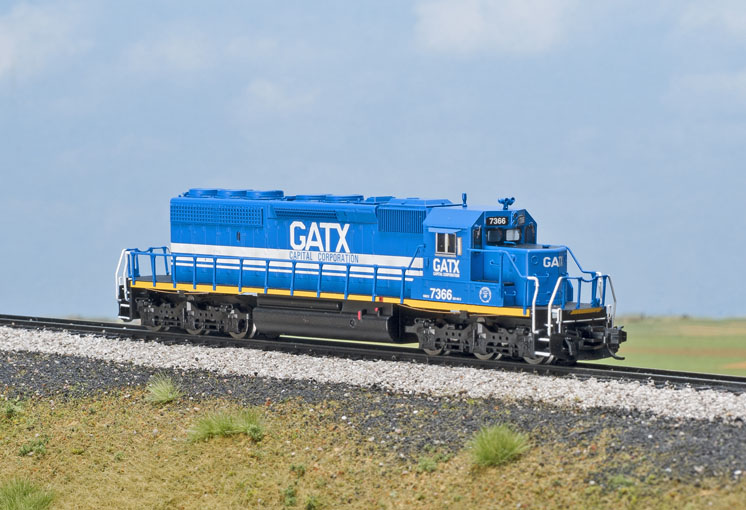 A newly tooled N scale SD40-2 with a detail level that rivals larger scale models joins the InterMountain Ry. roster. For the most part the 1:160-proportion model stacks up well against its General Motors Electro-Motive Division prototype. I tested a version factory-equipped with an ESU LokSound Select decoder.

Prototype. Part of EMD’s Dash 2 product line, the SD40-2 was the locomotive builder’s best-selling locomotive of all time. Electro-Motive delivered 3,126 SD40-2s to railroads across the United States, 719 to Canadian railroads, and 107 to Mexican lines.

Produced between 1972 and 1986, the SD40-2 featured a turbocharged 3,000 hp 16-cylinder 645E diesel engine. The SD40-2 featured many improvements over its SD40 predecessor, including modular electronic components and high-adhesion HT-C trucks.

Separate plastic parts include a rooftop “firecracker” antenna and three-chime air horn. The handrail and stanchion assemblies are made of flexible acetal plastic to resist breaking.

All the cab windows have clear plastic glazing, as does the water-level sight glass on the engineer’s side of the long hood. Etched-metal details include the wind deflectors and separately applied windshield wipers.

Our review sample models GATX no. 7366 as the prototype looked after 1990, when its lease reverted back to its owner, GATX Capital Corp. Built in 1975, the locomotive began its career in Missouri Pacific blue as no. 3185, followed by Union Pacific livery as no. 4185 after that company absorbed the MP in 1982.

The model has clearly printed graphics, including the correct Burlington Northern West Burlington Shops logo on the battery box doors. The GATX logo on the sides of the hood and cab looks thinner and its spacing doesn’t match prototype photos of no. 7366.

Railfans refer to the detail changes that took place during the SD40-2s production run as “phases.” Like its prototype, the model is of a phase I SD40-2. The model correctly has a ratchet-style hand brake, wire air intake grills, and riveted cab panels. A later-production SD40-2 would have a brake wheel, louvered grills, and welded panels.

On the model the short hood measures 88 scale inches long, which is correct for a phase II SD40-2 but not the model’s phase I prototype. The short hood length on a phase I SD40-2 is 81″.

Mechanism. After removing the front and rear couplers, I carefully lifted off the plastic body shell. A split die-cast metal frame surrounds the motor and flywheels. Truck-mounted gearboxes transfer power to all six axles. The ESU LokSound decoder slides into slots on top of the frame. Surface-mount light-emitting diodes on each end of the decoder illuminate the headlights.

Out of the box, the locomotive continually stalled. Phophor bronze strips run from the die-cast metal frame to the top of the truck on each side, but weren’t making good contact with the truck pickups. Using tweezers, I bent the strips downward and made sure each one was secure on the sideframe.

ESU Full Throttle. With the contacts fixed, the model ran smoothly on our DCC test track from 2 scale mph to a prototypical 70 scale mph top speed. The decoder can be switched to 128 speed steps for more precise speed control.

The ESU decoder has some built-in momentum, but more can be added via configuration variables (CVs). There are CVs that control every aspect of the decoder’s sound, light, and motor performance, including function mapping and setting individual volume levels.

I easily programmed the decoder to the locomotive cab number, added momentum, and advance-consisted the SD40-2 with another decoder-equipped N scale diesel. A quick-start guide is included. Extensive online user guides are available at intermountain-railway.com.

The decoder came programmed with ESU Full Throttle diesel sound effects. The Hold feature provides a useful alternative to button-controlled manual notching. After getting the locomotive to the desired speed, I pressed function 9. Then I could use the throttle to notch the engine sounds up or down without affecting locomotive speed. When I pressed function 9 again, the speed automatically matched the sound.

I’m happy that the decoder features an independent brake. Pressing function 10 applies or releases the brakes regardless of the throttle setting.

Following instructions on the InterMountain website, I activated two additional Full Throttle features. The Coast function sets the rpm to idle, and the throttle controls the speed without affecting the sound. The Straight to 8 function simulates the sound of the engine being put into notch 8 when starting out with a heavy train.

On our DC test track, sound and lights came on after I advanced the power pack to 5.5V. The model started moving at 7V with a little jerkiness that smoothed out at 8V. From there the SD40-2 accelerated smoothly to a top speed of 60 scale mph.

On DC layouts, sound effects are limited to the prime mover. The RPM sounds realistically increase before the model starts moving with some built-in momentum. When I flipped the power pack direction switch, the locomotive slowly came to a stop and reversed without any interruption in the sounds or headlight flicker.

After some tweaking, the SD40-2 proved to be a smooth-running model, and the ESU Full Throttle decoder made me feel like I was in the engineer’s seat. 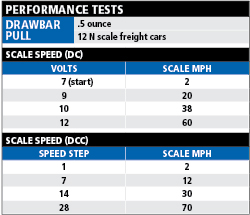