Hornby America, Inc. HO scale Big Boy steam locomotive
With a coat of factory-applied grime and rust, this HO scale Big Boy looks like it’s seen years of hard use. Since the late 1960s Rivarossi has manufactured Big Boy 4-8-8-4 locomotives in HO scale. This is the first Rivarossi Big Boy to be weathered and to include a dual-mode Digital Command Control sound decoder.

Prototype. The 4-8-8-4 Big Boy is generally acknowledged to be the largest steam locomotive ever produced. The Rivarossi model represents one of the first group of Big Boys (nos. 4000 to 4019) delivered to the Union Pacific by Alco in 1941. The UP received five more Big Boys in 1944.

The UP developed the articulated, simple-expansion 4-8-8-4 to handle the steady grades on the line between Ogden and Wasatch, Utah, without a helper. The Big Boys were also fast enough to keep up with the UP’s steady traffic flow. The locomotives made their last regular runs in 1959. Several Big Boys have been preserved.

Factory-applied weathering. The weathering on the Rivarossi model is quite heavy. Compared to color photos that I found, the weathered model doesn’t capture the look of an aging Big Boy in the 1950s.

An especially heavy coat of rust and brown cover the locomotive’s running gear and lower part of the tender. Additional streaks of rust follow the rivet seams along the tender’s water tank. There are also white streaks down the boiler under the pop-off valves, simulating the mineral deposits or “scale” left behind from condensing steam.

The lettering on the locomotive and tender is straight, neatly applied, and matches prototype photos. Smaller printing, such as the test stencils on the air reservoirs, paint stencil on rear of the tender, and the builder’s, equipment trust, and superheater patent plates are legible under magnification. 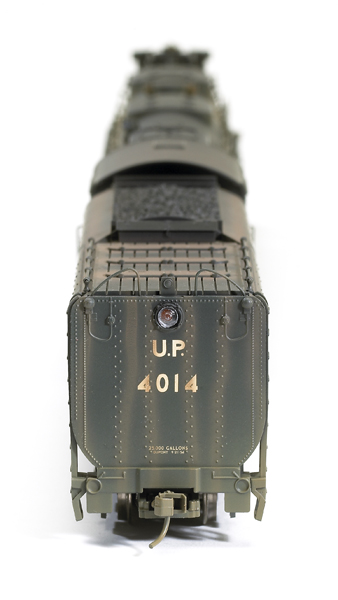 The Big Boy’s tender features wood-plank detail on the deck and an operating backup light.
Dual-mode DCC. The dual-mode ESU LokSound DCC decoder is mounted on top of the motor inside the boiler. A single speaker faces upward in the smokebox. The large centipede tender (perfect for a speaker enclosure) is empty except for a backup light and a two-wire cable that connects it to the decoder in the locomotive.

In DC, the model started moving at 7 volts and features the sound of four chuffs per wheel revolution. As the locomotive’s speed increased, some chuffs overlapped, simulating the front and rear engines going in and out of synch. The overall sound quality is good, although the chuffs have a short staccato quality when compared to those of a prototype steam locomotive.

When the locomotive is still, random sounds play, including the air pump and water injector. There’s also the sound of a fireman shoveling coal, although the prototype was stoker-fired.

There are more sound and programming options available in DCC. The model has 13 DCC functions, including a bell and a long and short whistle. The decoder supports 14, 28, or 128 speed steps.

I easily changed the model’s long address to the locomotive number. The decoder features many adjustable configuration variables (CVs), including the individual volume levels of the bell, whistle, and random sound effects. A list of all the programmable CVs is available in an extensive user manual that can be downloaded at www.esu.eu.

In both DC and DCC the Big Boy has impressive speed control. The model crept along at 1 scale mph without any binding or hesitation and accelerated to a top speed of 68 scale mph (55 scale mph at 12 volts in DC mode).

Model construction. The tooling and mechanism of the model are the same that Rivarossi has used since it introduced its HO Big Boy in the late 1960s. Most of the model’s dimensions match drawings in the Model Railroader Locomotive Cyclopedia Vol. 1: Steam Locomotives. (Kalmbach Publishing Co.) There are some compromises to scale fidelity to help the model achieve an 18″ minimum radius.

The Rivarossi Big Boy is built primarily of plastic with crisp molded detail, such as the rivet seams. Separately applied detail parts include handrails, throttle linkage, and aftercoolers on the pilot deck. A package of user-installed brake hangers and cab handrails is also included.

The flywheel-equipped can motor inside the boiler has two worm gearshafts connected to gearboxes on the third axle of each engine. The side rods transfer power to the rest of the axles.

The third set of drivers on the front engine has traction tires, which contribute to the model’s impressive 5-ounce drawbar pull. A set of user-installed drivers without traction tires is included.

I ran the model through 18″ radius curves without difficulty, although it looks much more realistic on broader curves. The rear engine on the locomotive pivots, as does the rearmost wheelset in the pedestal truck on the tender. This is unprototypical, but helps the Big Boy negotiate tight curves.

When maneuvering through a yard on our layout, the Big Boy stalled through some turnouts because of the model’s limited electrical pickup. The locomotive picks up power through a total of eight wheels: the left wheels on the lead truck, the right wheels on the trailing truck, the first and fourth drivers on the left side of the front engine, and the first and fourth drivers on the right side of the rear engine. None of the tender’s wheels picks up power.

Hopefully the firm will address the power pickup issue for future releases. The Rivarossi model has great slow speed performance and a smooth mechanism that operates well on both DC and DCC layouts.