Pennsylvania RR had the largest Centipede fleet, purchasing 12 pairs that were drawbar coupled. Because each unit in the pair carried different equipment, such as the Train-Phone system, needed for the pair to operate, these Centipedes weren’t true A-A sets. On the PRR the Centipede roster consisted of 12 A1 units and 12 A2 units. Any A1 unit could be coupled to any A2 unit to make a complete locomotive.

Originally used for passenger and freight service, the Centipedes were classed BP-1 (later BP-60a) by the PRR. Reliability issues caused the railroad to demote the Baldwins to helper service in the early 1950s, and they were re-classed as BH-50.

The only other railroads that operated Centipedes were Seaboard Air Line and Ferrocarriles Nacionales de México (N de M). Both of these roads ran the locomotives as single A units.

The PRR and SAL locomotives were all scrapped by the early 1960s. The Centipedes lasted longer in Mexico, with some units serving into the early 1970s.

The model. Like the Broadway Limited HO scale model (read the review in the January 2011 Model Railroader), the N scale Centipede matches the major dimensions of a diagram in the 1947 Simmons-Boardman Locomotive Cyclopedia of American Practice.

A version is also available in a fictional Union Pacific scheme. The UP did order a set of Centipedes, but canceled the order before delivery. These units ended up as Baldwin demonstrators and were scrapped in the early 1950s.

Our review sample models a drawbar connected pair, PRR nos. 5821 (A2) and 5833 (A1). The Dark Green Locomotive Enamel is the correct “almost black” shade and the lettering and striping matches prototype photos.

Versions sold as single A units, as shown above, include operating knuckle couplers on both ends. The mechanism rests atop a die-cast metal frame.

The mechanism. Removing the press-fit plastic body shell reveals a round, downward-facing speaker behind the cab, a motor with dual brass flywheels, and the DCC circuit board. The die-cast metal chassis provides much of each unit’s 4.8 ounces of weight.

An 8-axle drivetrain gives a single unit a drawbar pull equal to 24 N scale freight cars. Four user-installed wheelsets with traction tires are included with our A1-A2 set. This provides two traction tires for each 4-axle D truck. Installing these axles will increase pulling power, but the wheels with traction tires won’t pick up electricity.

Like the prototype, the model features an articulated 8-axle chassis. The 4-axle front and rear pilots aren’t fixed, which isn’t prototypical. However this allows the model to negotiate a 9¾” curve radius. I found that the locomotive looked better on curves of 11” radius or greater.

Performance. On our DCC test track, the model captured the unique sound of the Baldwin prime movers. I enjoyed hearing the Pennsy units operate while paired together. Sound effects include the bell, air horn, and controlling the prime mover rpm independently from the locomotive speed (manual notching).

In all, there are 28 user-controlled functions. Each can be easily remapped to any function key.

Using the model’s many programmable configuration variables (CVs), I could adjust individual sound effect volumes and set up speed tables. Downloadable user and technical manuals are available at www.broadway-limited.com.

Out of the box, the units of our A1-A2 set are factory-programmed to run together with a default address of 3. One unit has bit 0 of CV29 set to 1 so that it runs with its normal direction reversed. Using the NCE Powercab in our workshop, I easily advance consisted the models to an easy-to-remember consist address of “58,” which is the first two digits of both road numbers. The locomotives were speed matched out of the box.

The model also ran smoothly on our DC test track. The engine rpm sounds increased and decreased with the DC throttle. A brake squeal sounded when I quickly decreased the throttle. The addition of a BLI DC Master Analog Control module (sold separately for $49.99) gives DC users the ability to trigger sound effects and program CVs.

On both DC and DCC layouts the models accelerated to a top speed of 55 scale mph, which is about 10 mph slower than the prototype’s lowest gearing. However, I find this speed is more than fast enough for the compressed distances of model railroad main lines.

Broadway Limited Imports did a fine job bringing the unique look and sound of the Baldwin Centipede to life in N scale. 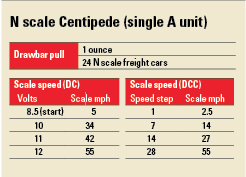