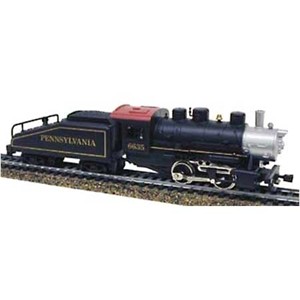 Model Power HO scale 0-4-0 steam locomotive
It’s hard not to laugh as you watch this small locomotive speed around the track at high speeds. This lightweight, but tough switcher is a cheap model, costing just a little bit over $45. This engine is a half-accurate representation of an 0-4-0 switchers, that worked the smaller yards during the steam era.

The Prototype: 0-4-0 switchers were used in smaller rail yards, where tighter curves called for smaller, more compact steam locomotive, to muscle the freight cars to the main line where larger locomotives would then transport the freight across the nation.

The Model: My review sample was decorated for the Pennsylvania Ry., which is most likely the prototype for the model. The Pennsy built few of these engines, all of which had slope-back tenders, boxy Belpaire fire boxes and Walshaerts valve gear. Although the model does have the correct slope-backed tenders, the model doesn’t have the Belpaire firebox, or the correct valve gear. The model also has the headlight molded right on the smoke box door. It’s in the correct position, but the prototypes headlight was separately applied. There was a number plate on the middle of the smoke-box door, but instead of having a numbered plate, the model has a doughnut shape, which is not all that realistic.

This model features no separately applied details, and all are molded on. This may turn you of, thinking that there are no details on this model at all, but it does have a large amount of details, like compressed air tanks, dynamo, whistle, bell, and piping. It also has the correct cylinders on the model that match the prototype very closely. The model is not in the higher quality line of Model Power, and these models are not near as detailed or as well-running as the Mantua Classics line, which is only steam engines, and old-timer train cars.

There’s no glazing on the windows, and there are no figures in the cab. There is no blackhead, but you can see the motor. This is one fault I seem to always find with Model Power’s steam locomotives. I don’t know why they are always like this, as many of them had hidden motors on the older models. The cab on the locomotive is an all-weather cab, with only one door on the driver’s side of the cab. All-weather cabs were uncommon on switching locomotives, since there was little need.

The Mechanism: To inspect the mechanism I removed a screw from the boiler saddle, and pulled the shell out from two holes that help keep the rear of the cast in place. The frame is one cast piece, with a weight built right into the frame. The cylinders are a separate plastic cast. There is a worm gear that is driven of the motor, and runs the wheels. There is no flywheel on this model, so momentum and electrical conduct are a problem on this model.

Performance: I ran the model on my 5 x 10 layout, using an average DC system, as I am not going to convert to DCC until I build my next layout. At about 4 volts, the headlight turned on, and at about 5 volts, the model moved, at about 10 scale miles per hour. At 12 volts, the model flew around the track at what would be about 100 or so mph! Although this may sound fun that you are running a mini Hiawatha, this is not all that good, as the lightweight causes the model to bounce on turnouts, and it with occasionally flip on curves. Now if the lightweight seems to make this a horrible model, this is the second strongest engine I have, second to an Athearn GP-9.

This small model will pull 10 40-foot boxcars on straight and level track. The GP-9 will pull all 32 train cars I own, and the junk old Bachmann 2-8-0 will only pull 9, as it’s old motor is slowly failing. I also own a Plymouth switcher from Model Power, and it has a hard time pulling three 34-foot Overton cars, which are the smallest cars I own. The model has no traction tires, so more slipping.

I highly recommend this small 0-4-0, as it will make a create contribution to any railroad.