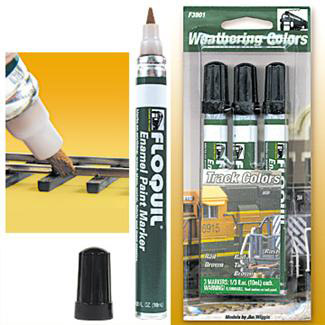 Floquil Paint Markers
Some time ago, associate editor Cody Grivno demonstrated painting rail with Floquil Pain Markers. I decided recently to give them a try. I found them on sale at Micro-Mark, so I bought the three-pack that included Rail Brown, Rail Road Tie Brown, and Rust. For my application, I used the Rust colored marker.

About three months ago, I pulled up some track that was laid too closely on our club layout many years back. I re-spaced the tracks so passenger and other newer and longer equipment could pass without hitting each other. I then airbrushed the new track with a mix of Rail Tie Brown, Rust, and Grimy Black. The color looked great for the ties, but the rail looked too dull for my liking; enter the Floquil Paint Marker.

After a few moments of shaking the marker and priming the tip, the paint was flowing evenly and covered really well on the first pass. I hit all the rail with one coat. I waited about 10 minutes and applied the second coat just to make sure I had complete coverage. The lighting in the area I painted is pretty bright, so the Rust color gets washed out a bit, but when equipment rides by, the rail stands out nicely and looks much more like the prototype than I thought it would. I will say though, that if you have quite a bit of track to cover, you’ll want to have a few of these markers at the ready. They do seem to get used up pretty fast. They aren’t cheap, but they aren’t too expensive either. They run about $7 per three-pack.

So if you are looking for a fast and easy way to paint some rail, try the Floquil Paint Markers. I think you’ll find them to perform well and save some time in the painting process and avoid a lot of clean-up too!