Read this product review from a Model Railroader reader 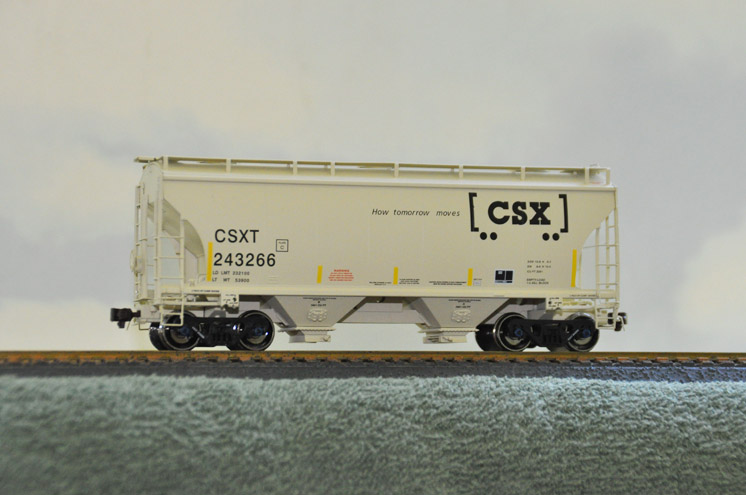 American Limited Models HO scale Trinity covered hopper
A modern covered hopper suitable for cement and other high density lading is now available for modelers who like present day operations. The Trinity 3281 cubic feet, 2 bay, covered hopper is ubiquitous on the North American scene. Modelers have been asking for one for years. American Limited Models has finally met the need with an excellent offering of this car which can be found nation-wide in railroad and corporate reporting marks.

The Trinity 3281 cubic feet hopper followed the firm’s introduction of a 5161 cubic feet design for grain service in 1996. Designed for cement, sand and other dense lading, this car only requires two hoppers instead of three on the grain car. The smaller size compensates for the greater density of the lading compared to grain. Loading is through three round roof hatches instead of the trough hatches found on the grain car.

American Limited spared no effort in providing a well detailed, easy running, model of this common car. It is a must-have for present day modelers because of its widespread use. Known for their detail parts, this is American Limited’s first foray into offering complete rolling stock. Tooling on this car is all new. As with most upscale models, this car features photo-etched running boards with many separately applied details. Handrails and coupler cut bars are of a very fine cross section. The model features 36 in. turned metal wheels which make it very free-rolling. On a layout the car will roll on an imperceptible grade. Two details stand out. The trucks are stenciled with the road number per modern practice and the couplers are scale size without trip pins. The dimensional data on each car, while similar, is specific to each owner. All lettering is crisp and clear. The warning label over a hopper on each side is correctly done in red. At 3.6 ounces, the car complies with National Model Railroad Association recommended weights. Using an NMRA template gauge and a Kadee coupler gauge, the wheels and coupler height check out to NMRA specifications.
The samples reviewed were lettered CSXT 243392 and 243266. As with many products, Trinity Rail has modified the car in production over the years. Facing the car with the B (brake wheel) end to the left, the lower stiffening channel does not extend all the way to the ladder on the left in this corner on the versions operated by CSX and UP. See prototype photo. The American Limited model has the stiffening channel extending to the ladder on all four corners. Review of photos reveals the same car built for some other users, including TILX, do have stiffening channels on all four corners. Review of many photos reveals that the roof walks, as delivered, were in native galvanized gray, rather than the basic body color. Modelers will want to paint the wheels brown or rust color, avoiding the treads and needle bearings, paint the bearing caps blue and then apply weathering to preference.

This new offering fills an important gap in commonly seen modern freight cars and is suitable for all regions. Since these cars usually travel in bunches, or even whole unit trains, modelers will be pleased to find multiple car numbers in both railroad and private owner reporting marks.