New York Central’s 20th Century Limited is ready to take to N scale rails with the new set from Kato. 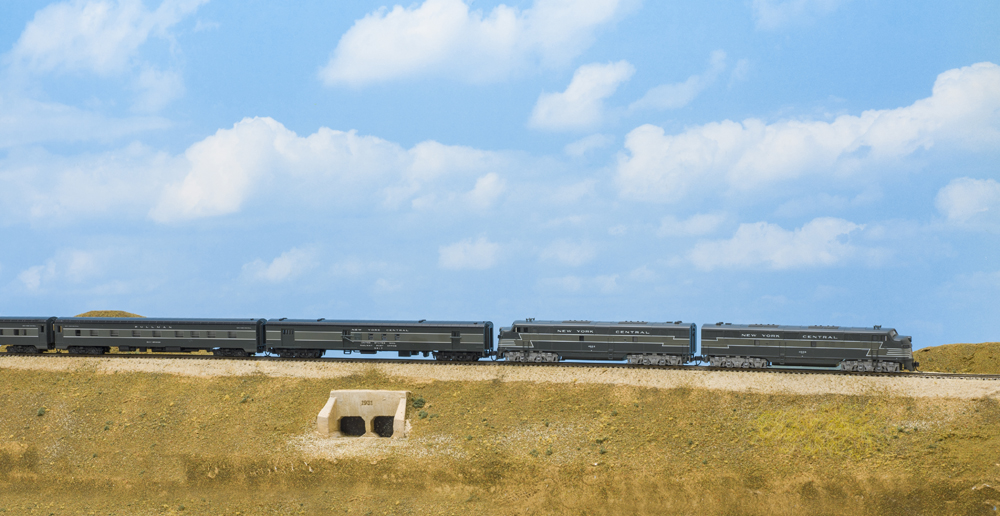 The 20th Century Limited was the top train of New York Central’s (NYC) Great Steel Fleet. The train made its 16-hour trip between Chicago and New York City overnight, with trains arriving in the opposite city at 8 a.m., ready for the new day’s business.

New York Central received its first E7s in March 1945, and by February 1948 it had 36 of the 2,000-hp covered wagons on its roster. The locomotives were powered by two 1,000-hp, 12- cylinder 567A diesel engines. The six-wheel trucks each carried two traction motors, driving the outer axles.

Pullman-Standard delivered its passenger car order in 1948 consisting of eight types to re-equip the 20th Century. Carried over from the 1938 train were 4-compartment, 4-bedroom, 2-drawing room cars of the Imperial series, renamed into the Bridge series in 1949. These cars rode on triple-bolster trucks.

The locomotives lasted into the NYC’s merger into the Penn Central. The passenger cars went to Penn Central, Seaboard Coast Line, Rock Island, and a few others, including Ringling Bros. and other private owners, or were scrapped.

Kato’s 20th Century Limited is an all-new set, from the E7A locomotives to the Lookout Lounge observation.

The one-piece body shell snaps onto a die-cast metal frame. The horns and window glazing are separate parts. A molded plastic light tube directs light from the chassis-mounted light-emitting diode (LED) to the headlight and number boards.

The LED is surface-mounted on a simple circuit board that snaps onto the top of the one-piece frame. Kato says  the model is compatible with Digitrax DN163K0D or Train Control Systems K0D8-G decoders. Decoder-equipped versions are also available. Modelers wishing to add a sound decoder should be prepared to remove some metal to make room for a speaker.

The rear coupler is truck-mounted; the front coupler is body-mounted. It can stay in place to remove the frame.
Just wiggle the frame to the rear to clear the black plastic insert that serves as a light block around the headlight and number boards.

The dark gray paint on our sample locomotives was evenly applied, and the separations between the light gray lightning stripes with white edging are sharp, as is the white New York Central lettering and numbering.

The models have one-piece plastic body shells with flush-mounted window inserts. Molded plastic interior pieces are snapped onto the frame/floor pieces. Several of the cars share frame castings, so the underbody detail isn’t always specific to the cars. The models also have simple diaphragms around the doors instead of the full-width diaphragms on the prototype. Those would make operation on typical N scale curves impractical.

Most of the cars are equipped with General Steel (GSI) four-wheel trucks, except the Bridge series cars, which have triple bolster trucks, and the baggage/RPO, which has six-wheel GSI trucks.

Again, all of the paint is evenly applied, and the light gray striping and lettering is sharp and opaque. Most of the cars weigh 1.2 ounces, with four of them measuring 1.3 ounces.

The Kato magnetic couplers are truck-mounted, except the rear coupler on the observation car, which is body-mounted. The blackened metal wheelsets have metal pickups for optional interior lighting circuits (no. 11-211/212). The observation has operating lights for the lounge portion of the car, rear markers, and tail sign.

I tested this direct-current set on a Kato Unitrack set using a Kato power pack. The EMD E7s started moving at 2V at  11 scale mph and topped out at 218 scale mph at 12V. The power pack maximum of 13.84V produced a 247 scale mph top speed. The fact sheet in the NYC diesel book said its E7s were geared for 98 mph, which was reached at a little over 6V.
The two E7s in the set had no trouble pulling all 13 cars in the combined basic and add-on sets. Everything tracked well even at full speed forward and reverse on the Kato Unitrack 315mm radius (about 12.4 inches) curves. Further testing on the Model Railroader/Trains.com Canadian Canyons layout showed the locomotives easily pulled their train up the 1.6 percent grade of the helix on the layout, but be aware of end overhang on curves, as some of our tunnel portals got in the way of progress.

Whether you simply wish to look at the train (the nine-car set includes a display track and a rerailer decorated to look like the 20th Century’s trademark red carpet) or add it to passenger operations on your layout, this is a fine-looking and running set.