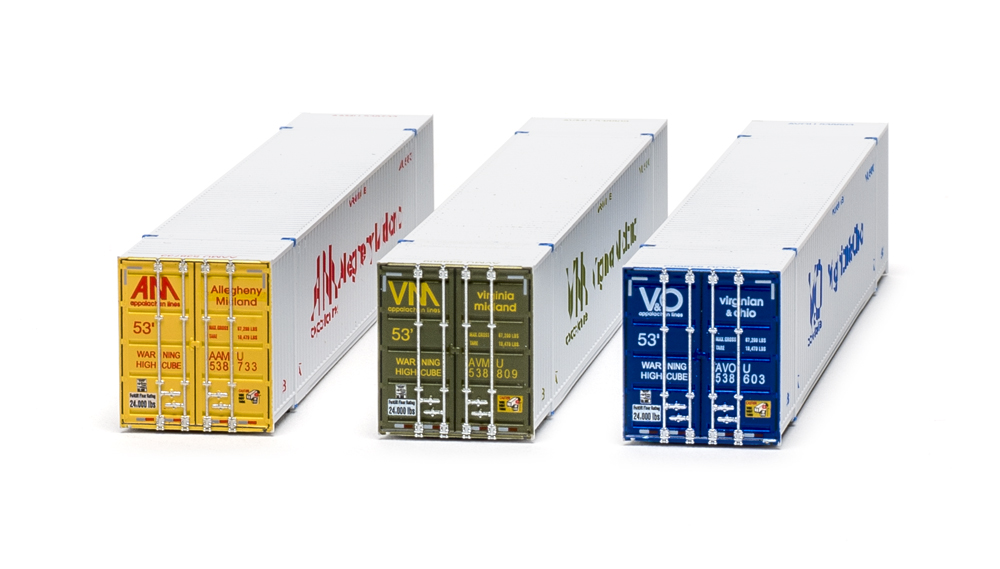 Though the layouts that made up the Appalachian Lines are gone, JTC’s models bring the fictional railroads into the modern era with three sets of 53-foot intermodal containers decorated for the V&O, AM, and VM. The containers are painted white with the railroads’ iconic gothic-letter heralds on the sides, and the ends painted in a contrasting scheme using the railroads’ official colors: royal blue and white for the V&O, red and yellow for the AM, and green and yellow for the VM. Each comes in a two-pack.

The paint jobs are exceptionally well done. The white sides make the containers perfect candidates for a subtle weathering job, and the colored ends really stand out. All but the very smallest printing is legible under magnification. The closure rods are molded-in details, but the accurate painting makes them stand out like separately applied parts.

The containers are injection-molded plastic, with the roof and sides a single piece; the floor is friction-fit. Steel plates are attached inside the roof, while three magnets are mounted to the inside floor. This makes containers stay stacked when well cars rock and roll through uneven track. The containers can be picked up by a magnetic crane, like the one from Walthers (part no. 933-3222).

According to my caliper, the containers’ dimensions were all within fractions of a scale inch of the prototype.

Intermodal traffic has brought to railroading a color and variety not seen on the rails since billboard reefers. Jackson­ville Terminal Co.’s new Visionary Series containers offer N scale modelers a way to boost their railroad’s container traffic while paying tribute to three of the all-time great freelanced model railroads.