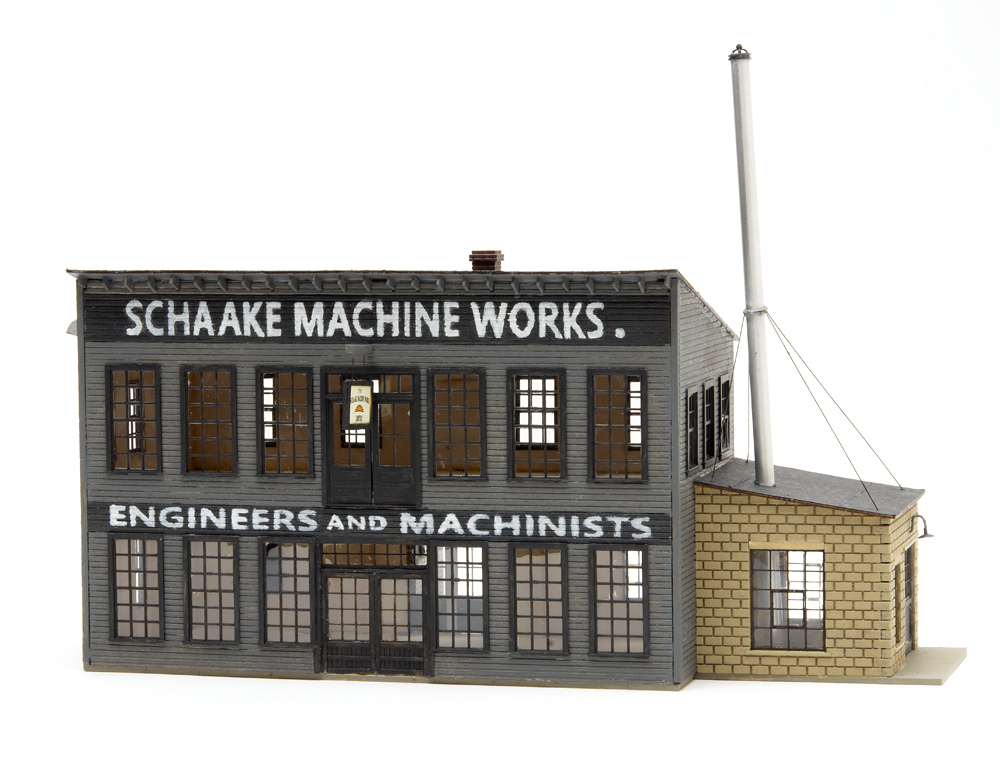 With scribed wood siding, large windows and skylights, and a wealth of detail parts, Schaake Machine Works is a distinctive new entry to the HO scale craftsman structure market. The kit, from Canada-based Inter-Action Hobbies, builds into a compact, eye-catching industry that would look at home on a layout from the early days of steam (if you omit the electrical meters and maybe replace the oil tanks with a coal bin) to the late 20th century.

The instruction packet includes a brief history of the prototype, an engineering firm built in New Westminster, B.C., in 1898. The building could represent the machine works as depicted, or with a change of signage it could just as easily be a box factory, a furniture maker, or a tannery.

What’s in the box?

The thick instruction packet is clear and well detailed, with lots of large photos and diagrams. Not everything has to be built in the order it’s presented in the instructions; for example, assembling, painting, and glazing the dozens of windows first will speed assembly later. Also, don’t glue the two annexes to their foundations until you’ve glued the foundations in place; this will ensure a better fit of the walls against the main structure.

The kit contains several sheets of laser-cut basswood siding, some etched to resemble concrete block; matboard foundation and floors; and resin-­impregnated board (RIB) roofing, windows, doors, and detail parts. A sheet of clear styrene window glazing is likewise laser-cut, as are a pair of RIB stencils for painting the lettering on the front of the building. Separate packets contain cast styrene detail parts and windows, stripwood of different sizes, a couple lengths of wire, an aluminum smokestack tube, and a small box of 3-D printed details. There’s also a parts identifier sheet (handy, since there are no identifying marks on the parts), a sheet of heavy black construction paper that can be used as roofing or an interior view block, and some printed paper signs.

Just because the wood and matboard parts are laser-cut, don’t get the idea that constructing this kit will be quick. This is a craftsman kit. It took me about 20 hours over three days to build, paint, and detail this kit, and I didn’t build all the details. Expect to spend 25 to 30 hours doing a careful job.

The instructions recommend painting the parts before assembly, and that’s a good tip when it comes to keeping your paint edges crisp. I brush-painted mine with an assortment of Testor’s Model Master acrylics. But be aware that water- or alcohol-based paints and stains will cause warping. If you want to avoid having to play the Human Clamp while the glue dries, get some extra 1⁄8″ stripwood and thoroughly brace the inside first. Painting both sides will also help.

The lack of locator tabs means that the modeler is free to attach the two single-story annexes to the main building almost anywhere, to suit the layout space. The instructions show these annexes both attached to the back of the main building and on either narrow end. On mine I put the shed on the back and the boiler house on the right side.

The one part of the building that does have to be assembled as instructed is the boiler house. Its wood walls are laser-etched to simulate concrete block, and the corners are notched so the courses fit into each other like a real block wall would. Although I’ve seen this done on other wood kits, I’ve not seen it done with this precision before. The corners of the boiler house came out excellent.

The large number of windows and skylights makes this kit a good candidate for interior detailing and illumination. In addition to Inter-Action, Busch, Faller, and Preiser offer machine shop detail parts and figures that would make a realistic interior. Most of the doors are designed so they can be positioned open to stage an interesting loading scene.

Those who model the early- to mid-steam era, like me, will be glad to have another large, period-appropriate industry for their layouts. Even if you model more modern times, it would fit in fine in an older part of town. The kit’s wealth of detail parts make it a standout.