Our sample is decorated as Norfolk Southern (NS) no. 5642, feature the railroad’s eye-catching “Training First Responders” scheme. The unit was built as Penn Central GP38 no. 7868 in January 1971. The four-axle road unit retained its road number when it went to Conrail in 1976. In the early 1990s, the GP38 was repainted in a special scheme for Conrail’s Philadelphia Division.

Norfolk Southern acquired the GP38 when Conrail’s assets were split between NS and CSX in the late 1990s. The railroad renumbered the locomotive 2923. According to the online resource altoonaworks.info, the 2923 was one of 73 former GP38s and GP38ACs that were rebuilt to GP38-2 standards at NS’s Juniata Locomotive Shop in Altoona, Pa., between January 2005 and June 2007. The rebuilt units became part of Norfolk Southern’s 5601 through 5673 series.

The 2923 was rebuilt in May 2006. Among the upgrades made during the rebuild included a rooftop air conditioner, extended-range dynamic brakes, cab signals, and Locomotive Speed Limiters. The rebuilt locomotive also received a new cab and short hood; the long hood was retained.

During the rebuild the 2923 was renumbered 5642 and painted in the railroad’s Thoroughbred paint scheme. The Training First Responders scheme was applied in November 2015.

The model. The Atlas GP38 has been part of the manufacturer’s Master Line since 2006. The model has a multi-piece plastic body; plastic handrails and stanchions; separate, factory-applied air conditioner, snow plow, and horn; and clear window glazing. I appreciated the painted gaskets around the number boxes and front and rear cab windows.

Other details, such as the grab irons, uncoupling levers, m.u. cables, and train line air hose are molded onto the body. The lift rings on the top of the long hood are represented with nubs.

Some details specific to the NS 5642 were omitted, including front and rear ditch lights; m.u. receptacles; extra exhaust stacks; cab antennas, sun shades, and mirrors; extended range contactor access hatch; and spare knuckle holders on the rear pilot. The model’s air horn should have five chimes instead of three. The front and rear class lights were removed on the prototype.

The paint job on the full-size 5642 is quite involved, and Atlas did a good job executing it in N scale. The model depicts the locomotive right after it left the Juniata Locomotive Shop in 2015. Today the prototype engine has a Norfolk Southern Police logo in the white stripe below the road number on each side.

There are a few voids in the stripes, most notably in the “knuckle buster” door handles. These could easily be fixed with some paint and a fine brush.

Measuring up. The Atlas model closely matches prototype drawings of a GP38 published in the Car and Locomotive Cyclopedia of American Practice (Simmons-Boardman Publishing Corp., 1970). The body-mounted Accumate couplers are installed at the correct height, and the blackened-metal wheels are correctly gauged.

To separate the plastic body from the metal chassis, I gently wiggled the shell until it slid off. The model has a split-frame mechanism with wired truck leads. The ESU LokSound Select decoder is mounted on top of the frame. The Scale Speed motor is flanked by brass flywheels. The cube-type speaker is located in the fuel tank.

I tested the model in both direct-current (DC) and Digital Command Control (DCC) environments. For the DC test, I used a Bachmann power pack. The sounds came on at 6.4V, which is in the typical range for locomotives with a dual-mode sound decoder. The locomotive started moving at 2.9 scale mph at 7.4V and achieved a top speed of 87 scale mph at 12V. Full-size GP38s had a top speed between 71 and 83 mph, depending on the gear ratio.

I turned to a Model Rectifier Corp. Prodigy Express2 for DCC testing. The model crawled down the test track at 1.6 scale mph at speed step 1. At step 28, the model topped out at 116 scale mph. To bring the top speed to a more realistic range, I adjusted Configuration Variable (CV) 5, maximum speed. When I set CV5 to 75, the top speed was 81 scale mph. When lowered to 60, the GP38 maxed out at 67 scale mph. With a drawbar pull of .48 ounce, the model can pull 12 freight cars on straight and level track.

Looking sharp. I applaud Atlas Model Railroad Co. for releasing models in unique schemes, such as the N scale Norfolk Southern Training First Responders unit. I was really impressed with the painting and printing on the EMD GP38, right down to the yellow rooftop parts. The prototypical sounds were the cherry on the sundae. 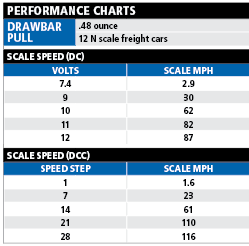 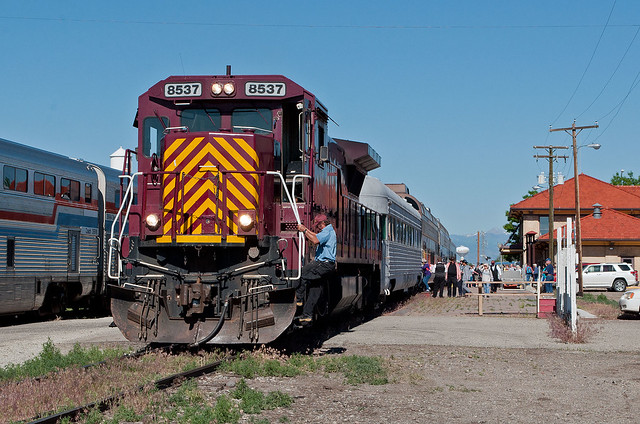 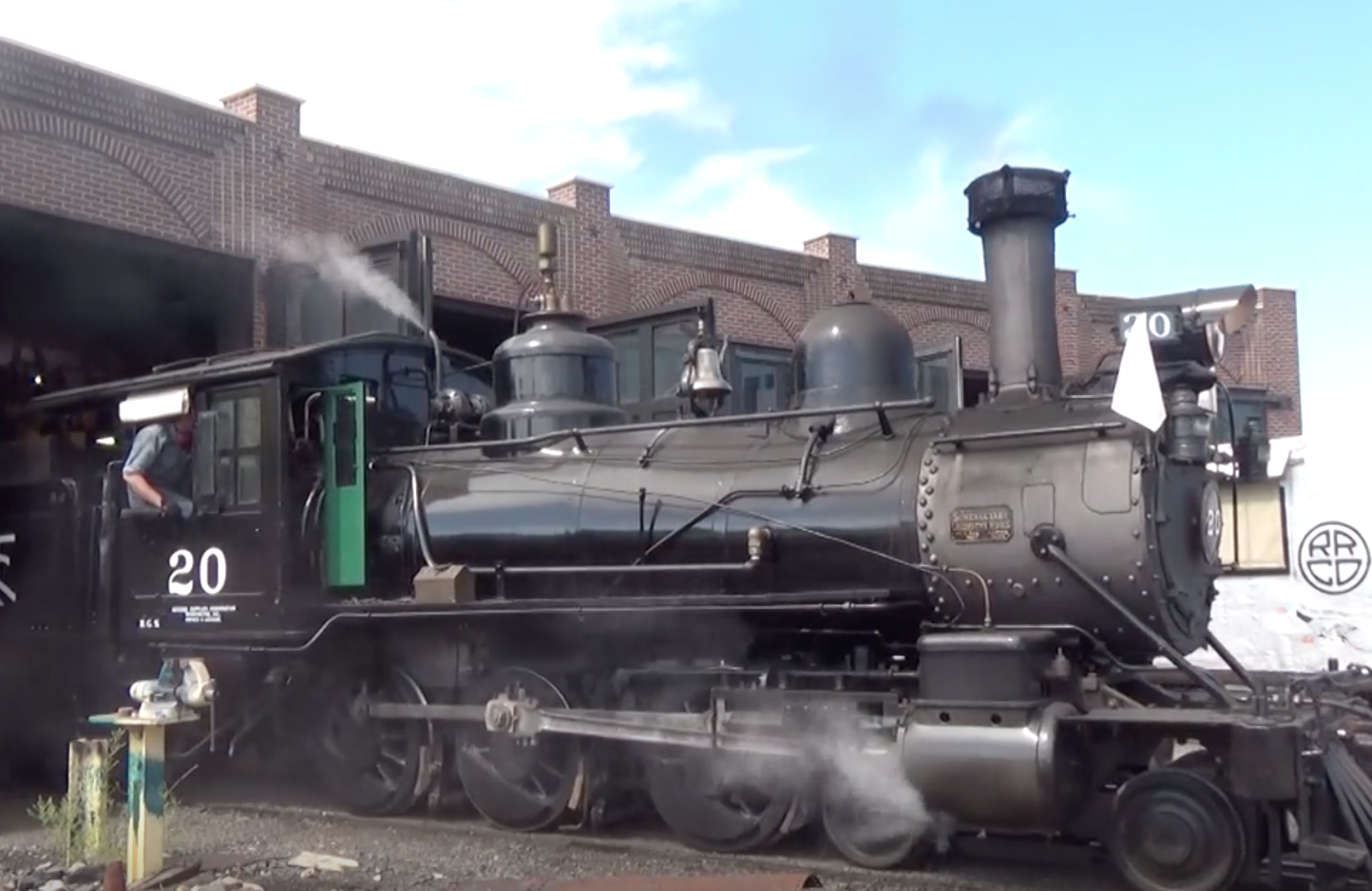 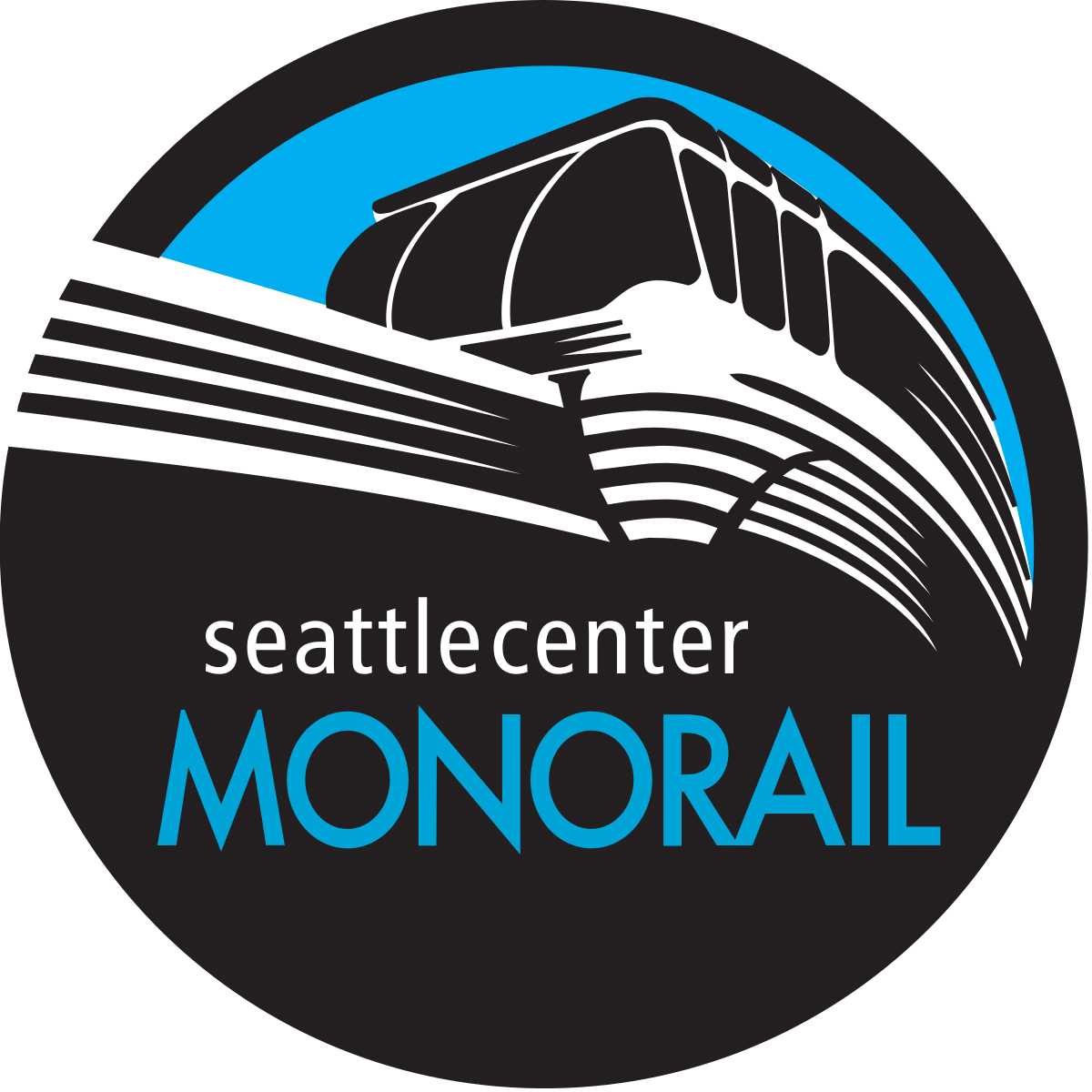