The new addition to the Atlas Model Railroad Co. Master Plus Line 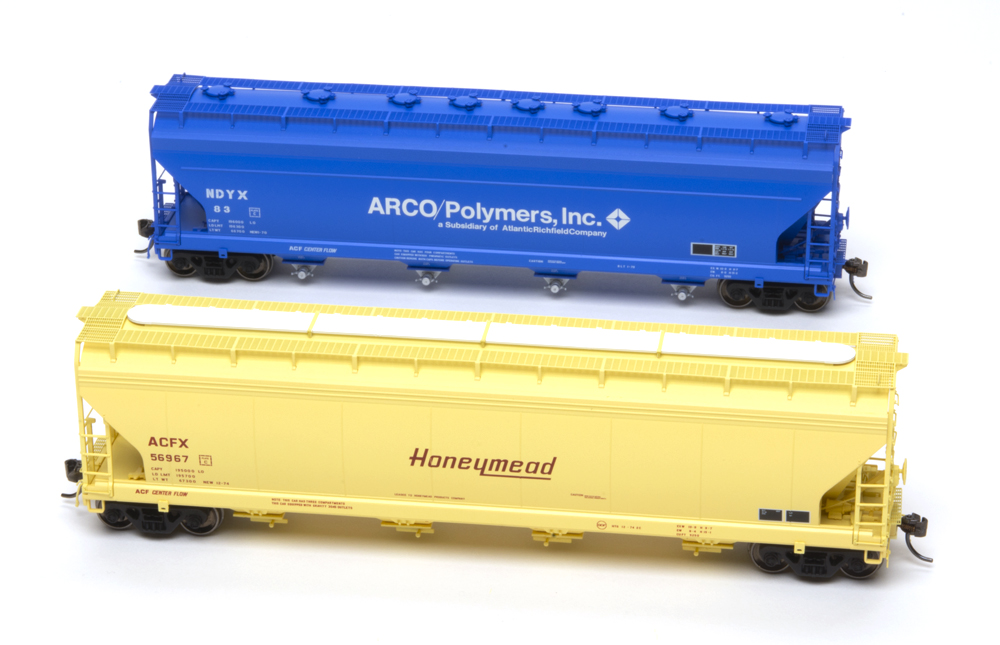 The ACF 5250 Center Flow made its debut in November 1964. The four-bay covered hopper was used to haul commodities including feed, grain, plastic pellets, and resins. Atchison, Topeka & Santa Fe; Great Northern; and Wisconsin Central were among the railroads to roster the 5250. Many cars, especially those used in plastic pellet service, were in private ownership.

American Car & Foundry produced the 5250 covered hopper from 1964 through the early 2000s. Early cars (1964 through August 1971) can be identified by the single horizontal stiffener on the car side. Covered hoppers produced after that date have two horizontal ribs where the roof meets the sides. Among other changes over the years were the distance between the truck centers and the number of body panels.

We received two samples, a round hatch car decorated for Arco Polymers Inc. and a trough hatch car lettered for Honeymead. The Arco Polymers car is based on prototypes from Dresser Leasing Corp.’s (NDYX) 19 through 94 series constructed in January 1970. The full-size Honeymead cars were part of the ACFX 56964 through 56983 series built in December 1974.

Some of the early 5250s with colorful graphics for companies like BF Goodrich, El Rexene Plastics, and Hercules have either been scrapped or repainted. There are still plenty of examples of later four-bay covered hoppers on the rails today.

The Atlas model has an injection-molded plastic body with a separate roof. Four V-shaped weights are secured to the car’s interior with screws. The roof is offered with round or trough hatches and etched-metal Morton or Apex Tri-Lock running boards as appropriate.

The freestanding end cages have a mix of molded and wire grab irons. Other features on the car ends include separate shoe plates and etched-metal crossover platforms. The brake appliances are separate, factory-applied parts.

Underneath, the car is offered with prototype-specific outlet gates (pneumatic or gravity as appropriate). The truck bolsters, shaker brackets, and draft-gear box covers are separate castings. The Barber S-2 100-ton trucks have raised foundry data and correctly gauged 36″ metal wheelsets.

I compared the Atlas covered hopper to prototype drawings published in Eric A. Neubauer’s DVD A History of the Center Flow (2007). The 45′-11⁄8″ truck centers indicate the model is based on a “long” 5250 covered hopper (“short” cars, produced from 1964 to 1968, had 44′-9″ truck centers). The length over the running boards and corner posts was also accurate.

There were a few dimensional issues with the car’s width. The distance over the corner posts on the end cages is a scale 9′-11⁄4″ (it should be 10′-05⁄16″). The distance over the side sills is a scale 9′-71⁄2″ instead of 10′-1″. Atlas is aware of these issues. A company representative said the end cages and draft-gear boxes will be revised on the second run.

The car ran without incident on our Milwaukee, Racine & Troy and Wisconsin & Southern staff layouts. Though the covered hopper will negotiate 18″ radius curves, the overhang doesn’t look very realistic. I’d recommend 22″ or broader curves for this car.

Overall, Atlas did a good job on its Master Plus 5250 Center Flow. The various body styles, etched-metal running boards, and metal couplers are all nice touches. The width issues didn’t impact how the car operated.

After looking at the exploded-view drawing, Atlas has a lot of options for the 5250. I’m hopeful some Great Northern Glacier Green cars are in the works.