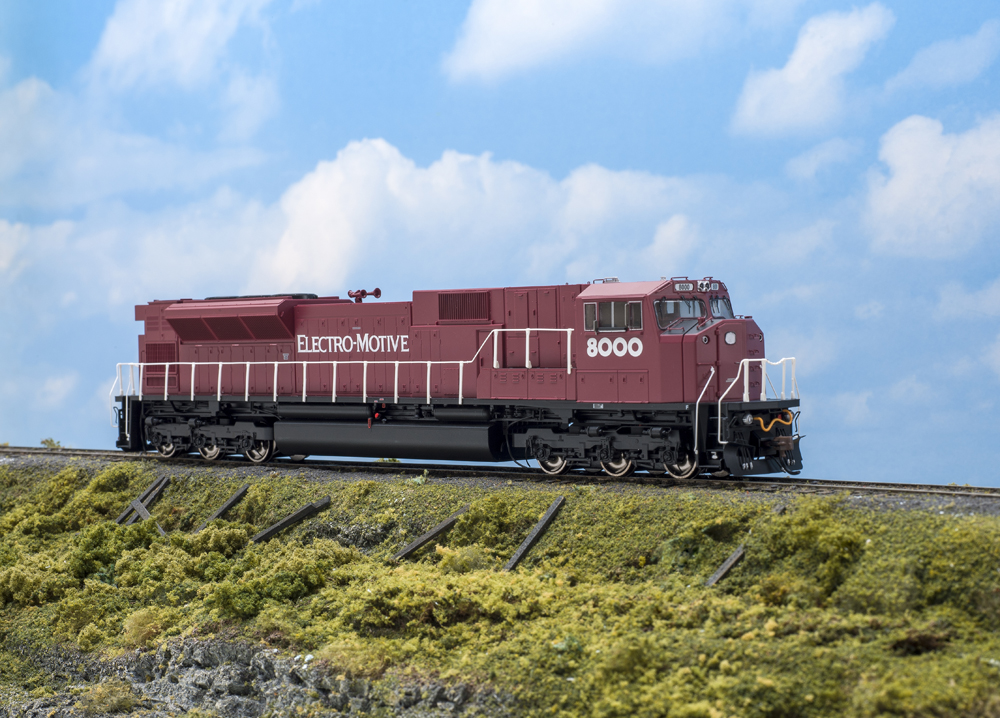 A short-run diesel. The mid-1990s saw longtime locomotive manufacturing rivals Electro-Motive Division (EMD) and General Electric in another horsepower battle thanks to the development of alternating-current traction. In July 1995 EMD unveiled the SD80MAC, a 5,000-hp, six-axle road locomotive that featured a 20-710G3B diesel engine, HTCR-II radial trucks, and an isolated cab. Measuring 80′-2″ and with large, flared radiators, the locomotive stood out compared to earlier EMD offerings.

Though the SD80MAC sounded promising on paper, it didn’t deliver in sales. Between July 1995 and May 1996, a mere 30 units (28 for Conrail plus two demonstrators, which ultimately wound up as part of the Conrail fleet) were produced. Chicago & North Western was scheduled to receive 15 units, but the order was canceled after the railroad’s merger with Union Pacific in 1995.

Norfolk Southern sold its fleet of 29 SD80MACs in 2020. Six were purchased by Canadian Pacific as part donors for the railroad’s SD70ACU rebuild program. Progress Rail acquired the rest.

The model. The Athearn Genesis 2.0 SD80MAC has an injection-molded plastic body with Celcon handrails, stanchions, and uncoupling levers; factory-installed and painted wire grab irons; and etched-metal see-through screens on the dynamic brake section.

The cab roof is held in place by two magnets. Inside is an engineer’s control desk, a conductor’s desk, three seats, and circuit breaker panels on the back wall. The cab side windows are tinted.

Additional rooftop details include grab irons and lift rings, a metal three-chime air horn, and an etched-metal dynamic brake grill. The three 48″ Q-fan housings on top of the radiator section are plastic and feature separate fan blades held in place with a retainer pin.

A variety of freestanding details are attached to the bottom of the sill, including air tanks, traction motor cable bundles, a bell, and a battery starter and fuse box, among other items. Light-emitting-diodes are hidden behind the castings for the ground lights below the cab.

The front and rear pilots both have plastic uncoupling levers, m.u. receptacles, vinyl m.u. cables and trainline hoses, and grab irons. The front pilot also has ditch lights and a snow plow; the rear pilot has spare knuckles.

What’s inside? Separating the shell from the chassis required a multi-step process. First, I unscrewed and removed the front and rear draft-gear boxes. Next, I took out two screws, one each above the front and rear truck. Then I gently wiggled the shell until it slid free. Use caution, as wires from the motherboard are tethered to the shell.

A five-pole skew-wound motor, framed by brass flywheels, is centered in the chassis. The motherboard for the SoundTraxx Tsunami2 decoder is attached to a plastic mount above the motor. Two downward-facing cube-type speakers are located above the rear truck. A PC board for the rear headlights and number boxes is attached to the rear frame weight with a single screw.

Test track. The model’s dimensions closely follow drawings published in the April 1997 Model Railroader. The one difference was the truck pivot locations. On the model they’re centered over the middle axle, about 52 scale feet apart. On the prototype, the pivot points are ahead of the middle axle on the front truck and behind the middle axle on the rear. The distance between those points is 54′-2″.

Our sample is decorated in EMD’s maroon-and-black demonstrator scheme. The paint is smooth and evenly applied with crisp separation lines between colors. The white printing is opaque. All but the smallest warning labels are legible under magnification.

The 44″ metal wheel stubs, mounted on plastic axles, are correctly gauged. The body-mounted McHenry scale couplers are mounted at the right height. The model tips the scales at 1 pound, 7.1 ounces.

The version we reviewed has a dual-mode SoundTraxx Tsunami2 sound decoder, so I tested the model in both direct current and Digital Command Control (DCC) environments.

I turned to an NCE PowerCab for the DCC testing. At speed step 1, the locomotive ran at 4 scale mph. At step 28, the road locomotive maxed out at 82 scale mph.

The model has a drawbar pull of 5.4 ounces, equivalent to 76 freight cars on straight and level track. When I took the locomotive over to our Milwaukee, Racine & Troy project layout, I was able to pull 15 50-foot boxcars up the 3 percent grade between Bay Junction and Skyridge.

Covering the eras. Athearn’s selection of paint schemes covers the history of the SD80MAC, from the first two ­demonstrators built in 1995 to units repainted in Norfolk Southern’s Thoroughbred scheme that operated from 2005 through 2020. The model is a strong puller, too, and should be more than able to meet the demands of most model railroads.