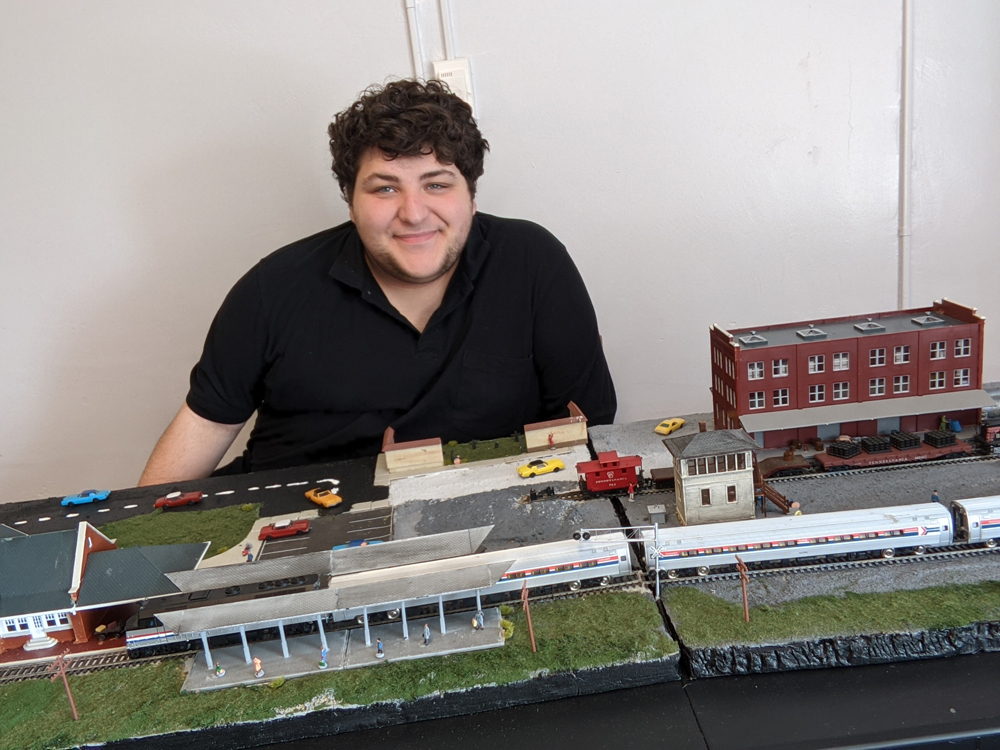 WAUKESHA, Wis. — There are only a few weeks left to submit a layout for judging in the Walthers National Model Railroad Build-off, and with the May 31 deadline looming closer every day, modelers nationwide are sure to be scrambling to add their finishing touches.

Yet from the cramped confines of his dorm room, Eastern Connecticut State University student Matthew Mendolia has his already-finished layout proudly on display. He’s more worried about moving out in a week, when he has to carefully transport his modules back home for the summer.

20-year-old Mendolia comes from a family of train enthusiasts, so his interest in the hobby was destined from a young age. His father converted one of the family’s spare bedrooms into a train room, and Mendolia grew up helping him out with projects. In middle school, he went to a local hobby shop and bought his own set for the first time – complete with a circle of Bachmann snappable track. The rest is history.

“I like that a layout is always changing, it never really ends,” said Mendolia, “There are many model railroaders who have been doing it for 30 years and they’re still adding stuff to their layout.”

However, it’s not always easy to be a college student with this hobby. Mendolia says the most challenging aspects are cost, space, and scale. But that doesn’t stop him – instead, he has to get creative. He has two 2.5-by-5-foot tables pushed together in his room, which doubles as a workspace for homework and a place to lay track. He also keeps a table out in the shared living room area of his suite-style room, much to the enjoyment of his roommate and other occupants on his floor.

“They like to see it go around,” said Mendolia, “Definitely the ones that make sound are what get them more excited.”

Mendolia’s layout for the Walthers competition is freelanced. He wanted to build a scene depicting an empty industrial area slowly transitioning into a suburban town. Complete with a station, freight yard, and even a cemetery, it’s his first-time doing scenery, or even finishing a fully detailed layout from start to finish.

“I’m very proud,” said Mendolia, “I think it came out very nice for my first time.”

Although the layout was finished as of last month, it took about six weeks to complete. Amidst schoolwork, his job as a Resident Advisor in his dorm, and his duties as senator for the student government, Mendolia had to find little pockets of time throughout his busy week. All this while still managing to create content for his YouTube channel and Instagram, which he started back in 2019.

Mendolia was at the Amherst Railway Society Railroad Hobby Show one year when, while people-watching the crowd, he noticed there was a big age gap between attendees. Most of the hobbyists there were either young kids with their parents or older adults – with almost nobody his age.

This disparity inspired him to start his YouTube channel, The College Railroader, in an effort to try to reach out to kids in his demographic and get them inspired to start building, regardless of the confines of their situation. He started contacting modeling companies, and although several sent him model sets to review but never got back to him, Walthers offered him a chance to make a series of videos about building in small spaces to post on their own channel. Later, they invited him to be an “influencer” for the 2021 build-off.

“He’s got so much energy and passion, and it comes through like a freight train just how much love he has for this hobby,” said Zach Thompson, Walthers’ Director of Product Marketing, on why the company decided to start working with him, “We love the story of him saying ‘I’m going to college, but I love modeling. I’m going to do this there anyways.’”

Mendolia has no plans to stop modeling anytime soon. He hopes to continue growing his YouTube channel, and looks forward to seeing what other avenues he can expand into. His enthusiasm for model railroading is something he wants others to enjoy as well.

“Reach out to many other model railroaders, read all the magazines, read the different articles and interviews, find a blog to post questions about, talk to a hobby shop, join a train club,” Mendolia says. “It really helps a lot, and it goes a long way.”

Although the deadline to enter the Walthers National Model Railroad Build-off in the HO-youth, HO-adult individual, and HO-adult team categories has officially passed, contestants can still enter the contest via the open class category, which is accepting layouts from any ages, individuals, and teams, and can be completed in either N, HO, or O scale. Photos must be submitted online or sent in the mail by May 31 to be considered for judging.

“Even if you’re not a hundred precent finished at the end, submit it anyways,” said Thompson, “Be proud of your work.”

More information regarding the contest is available from Walthers’ website.